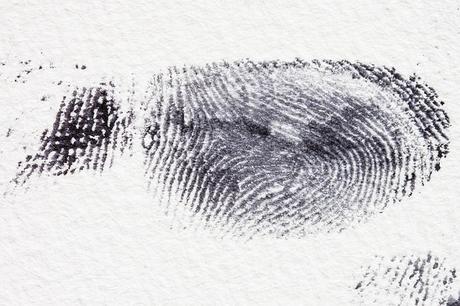 Image by Stefan Schweihofer from Pixabay

A lot of my reading tends to be opportunistic. I don’t usually decide beforehand, “Oh, I want a sci fi book”, or “It’s been too long since I’ve read a mystery”. We always have a couple of shelves full of volumes we’ve picked up at the local second hand bookstore. I’m typically reading several things concurrently, some in ebook form and some in print. When I’m looking for a new print read, I’ll browse through those shelves, waiting for a title to grab me.

Hence it was a bit of a surprise for me to realize that in the past month I’ve read three detective stories. This certainly wasn’t intentional. Even more interesting, each of the three books was written by an author from a different country. The similarities and differences motivated me to review all three in a single post. 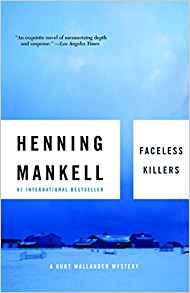 On a remote farm in rural Sweden, an elderly man is viciously bludgeoned to death, while his wife is left beaten, barely clinging to life, with a noose around her neck. The senseless ferocity of the attack raises a public clamor for justice. The old woman’s final word - “foreign” - dramatically increases the urgency for police detective Kurt Wallander to solve the crime. Anti-immigrant sentiment is on the rise in formerly generous Sweden. As Wallander and his team meticulously sift through clues and follow up the most tenuous threads of evidence, vigilantes start targeting innocent refugees, and Wallander himself.

Faceless Killers is the first book in Mankell’s popular Kurt Wallander series, but the second that I’ve read. (You’ll find my review of The Fifth Woman here.) Like the previous novel, this one is unrelentingly bleak. Mankell skillfully evokes the flat, featureless terrain of Skåne province and its dank, chilly weather, as well as the largely empty, routine-filled lives of its inhabitants. The horrific violence of the crimes Wallander investigates offers a startling contrast to both the dull, mundane environment and the tedious, detail-oriented nature of police procedure.

Despite the darkness, these books fascinate. Wallander is a wonderfully flawed character, devoted to his job but almost helpless in dealing with his family and his personal life. He has learned to trust his intuition about his cases; he reacts without thinking in situations that require physical action, risking life and limb in the process. More than anything else, he’s persistent. He cannot let go of a case, even when it appears he has failed to apprehend the villains. I don’t think it will be too much of a spoiler to tell you that in this mystery, the trail goes cold for more than six months before Wallander has an unexpected breakthrough.

I’d expect this series to be depressing, but somehow it’s not. One reason is the moral issues that underpin the story. Mankell is seriously concerned about the “immigrant problem” in Sweden. He knows there’s no simple solution. Wallander reflects his creator’s confusion.

Indeed, if you’re interested in the complexities of immigrants and their stories, I recommend Mankell’s recent novel The Shadow Girls (which is not a mystery). 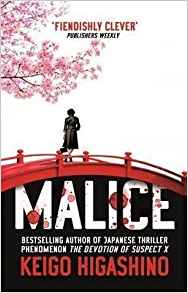 A famous writer, Kunihiko Hidaka, is found murdered, in a locked room, in his locked house, by his wife and his best friend, fellow author Nonoguchi. Despite the fact that Nonoguchi has an iron-clad alibi, police detective Kyochiro Kaga senses something not quite consistent about his story. As Kaga delves deeper, Nonoguchi confesses to the crime, a revenge killing for his supposed friend’s long-time extortion. Still, Kaga has his doubts. Only when he revisits Nonoguchi’s and Hidaka’s childhood together does he manage to uncover the whole truth.

Malice is an intellectual exercise, a so-called puzzle mystery, full of unexpected twists and clever deductions. Unlike the Mankell novel, it does not strongly engage the emotions – or at least, it did not engage mine. Detective Kaga seems to be primarily a vehicle for generating plot twists. He did not strike me as particularly realistic and I had little or no sense of who he might be aside from his mental acuity. Still, like Wallander, he is doggedly stubborn about ferreting out the true story behind Hidaka’s case. Even when he has a confession from the so-called murderer, Kaga can’t let the case go.

He is similar to Wallander in his trust of intuition as well. Although mental gymnastics play a far more important role in Malice than in the Wallander mysteries, it is Kaga’s feeling that things don’t quite fit together that propels him to deeper research.

A Case of Two Cities by Qiu Xiaolong 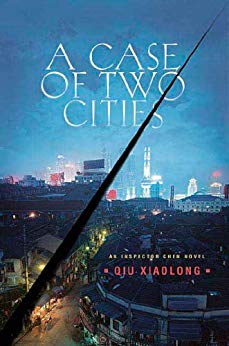 Inspector Chen of the Shanghai Police Department is a rising star – but perhaps someone wants to stop his ascent. His superior has assigned him a nearly impossible case, namely ferreting out the details about a web of corruption that involves the highest echelons in Chinese society, and bringing the players to justice. In a country where wealth and political power go hand in hand, where connections to the ruling Party ensure impunity, how can a lowly inspector, even one as intelligent and perceptive as Chen, make any headway? Indeed, digging too deeply into the affairs of the rich and influential members of the syndicate may be personally dangerous, as demonstrated by several murders that occur as Chen inches closer to uncovering the .

Like Kurt Wallander, Inspector Chen Cao is the hero of a series of detective novels. In each one, he tries to solve a case while struggling against dark political forces. Chen truly wants to serve society, but he’s too smart to ignore the abuse of power that surrounds him. He walks a tightrope between fulfilling his assignments and falling prey to the bribery and other seductions. He’s similar to Wallander in his strong moral compass, and his tendency to ignore his better judgment when called upon to act. However, he’s far more intellectual and introspective than Wallander.

Chen grew up wanting to be a poet, but the Party called him to other duties. Poetry still runs in this veins, though. The spontaneous quotations from classical Chinese verse are one of the joys of this series.

I’ve read most of this series, though not in the original order. Overall I didn’t like this book as much as the earlier ones. It seems that the series has become somewhat formulaic. At the same time, the tale has its brilliant moments, especially when Chen is pulled off the case and sent to St. Louis as the nominal head of a group of Chinese writers involved in a cultural exchange. Qiu shows us American culture viewed through the lens of the Chinese. These revelations are sometimes funny, sometimes embarrassing.

In my favorite section of this novel, Chen persuades a monk in a Chinese temple (in the US) to allow him to step in and tell fortunes as a way to gain information from the villain and his mother. Drawing on his literary background, Chen does such a fantastic job that he impresses not only his marks but also the monk.

Of the three authors discussed in this post, Qiu Xiaolong is the only one who writes in English. In fact, he is a professor at a U.S. university. His deep disillusionment with the current government in China shows in every page. His perspective is so unfailingly negative that it makes me uncomfortable. I’ve visited China five times in the past two years. I know that the corruption, the authoritarianism and the hypocrisy that Qiu highlights is very real. At the same time, I can’t help feeling that his own experiences as an expatriate have blinded him to some of the more positive aspects of modern China.

Or perhaps I am wrong. Maybe the dark picture he paints is realistic. In any case, his books in a way are more political polemics that true mysteries. If you’re looking for a pure whodunnit, I would not recommend the Inspector Chen novels.