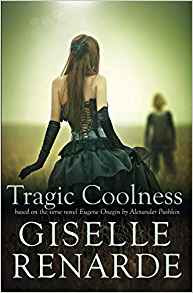 As Tatyana – Tats to her family – and her sister Oka pick berries in their family orchard, two figures approach from the distance. One is Oka’s lover, Len – a transman who has captured blonde lesbian Oka’s heart and imagination. Tagging along is a stranger, Len’s acquaintance Eugene Onegin.

Tats has a strong urge to run. Some intuition warns her that this newcomer will bring tragedy and pain. Before she can escape, however, he has joined them, and she’s lost:

She looked at him, and he looked at her, and her heart nearly exploded. Attractive and poetic. She hadn’t met a man like him since university. Men like this were bad news then, but Tats was older now. Maybe she would handle herself a little better, a little more like an adult and less like an obsessive teen.


Aside from being young and handsome, Eugene is elegant, cultured, cynical, and terminally bored with life. “E is Eugene who died of ennui,” Tats jokes during their first meeting, but she turns out to be right. Her premonition of heartbreak comes to pass as she succumbs to her desperate, visceral attraction. Their incandescent coupling convinces her that she has finally found her soul mate. Eugene, however, is gone when she wakes, leaving her without a word but with (as she discovers later) a most permanent memento: a child growing in her womb.

Eugene’s abandonment tears Tats apart. The next time he shows up, she tries to tell him about her pregnancy, but his clear disinterest in love or family make her hold her tongue. Devastation and death follow Eugene wherever he wanders. After he is responsible for a fatal accident involving his friend Len, he disappears from Tatyana’s life for nearly a decade. When he steps back onto the scene, he discovers that everything has changed – that he now fiercely craves the woman he discarded in the past, but that she is forever beyond his reach.

Giselle Renarde is best known as an author of erotica, often queer or kinky, but her talents are too creative and diverse to be pigeon-holed. Tragic Coolness is a remarkable book, evocative and compelling, unquestionably a literary feat. It is in fact a re-imagining of Alexander Pushkin’s classic verse novel EugeneOnegin, the source of many literary references including Tchaikovsky’s opera of the same name. However, with contemporary allusions and LGBTQ themes, Ms. Renarde has made the material distinctly her own. Still, there are echoes of poetry in the dialogue. The rhythm of the prose owes much to art, and might be expected to distance the reader from the characters, but that does not happen. Tatyana and Eugene remain real and believable despite the deliberate craft evident in the novella’s structure.

After reading Tragic Coolness, I became quite curious about the original. The translations I’ve found thus far have been turgid and opaque, but I have some hope of locating a version that helps me better understand Ms. Renarde’s inspiration.

Tragic Coolness is not a casual book designed primarily for entertainment. The title is apt; the ending is far darker than most erotica or romance readers might like. Nevertheless, I recommend it. It offers a deeper sort of satisfaction that will stay with you after you’ve forgotten your latest happily-ever-afters.