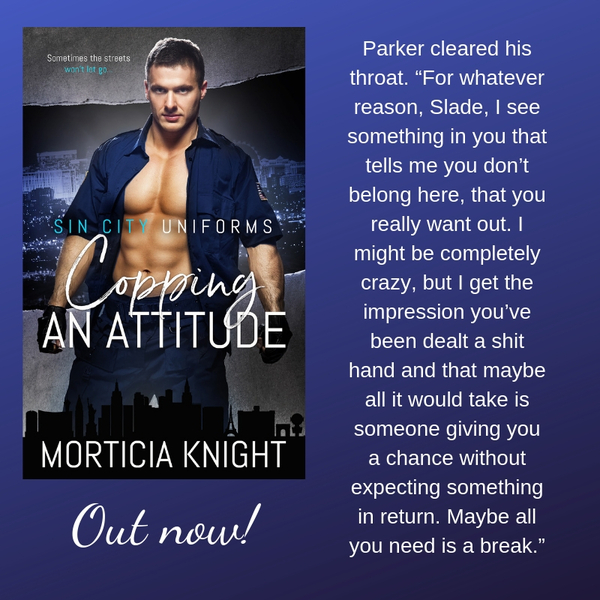 Survival is all Slade understands until Parker saves him from the terrors of the streets. Too bad the streets won’t let Slade go…

Hustler Slade has had little choice over his fate. Barely twenty years old, he’s had to survive any way he can after being thrown out for being gay when he was still in his teens. As soon as he hit Vegas, Slade was lured into the hopeless world of prostitution where he’s become a virtual prisoner to his pimp, the ruthless Julio Estevez.

It’s another typical night on the Strip when officer Parker comes across Slade. His heart breaks every time he sees someone so young being exploited. Yet something in Slade’s eyes tells Parker the young man might be in real trouble—especially after the recent wave of sex worker killings by a rival prostitution ring.

The two men’s lives become intertwined when Slade is almost beaten to death. The danger grows, but so does the relationship between Parker and Slade. Parker helps Slade to heal from the horrific attack and their bond deepens. But the human traffickers are still on the prowl—and they’ll stop at nothing to steal Slade back.

Publisher Note: This book has been revised and expanded from the original edition that was published under the same title at Totally Bound Publishing in January of 2015. 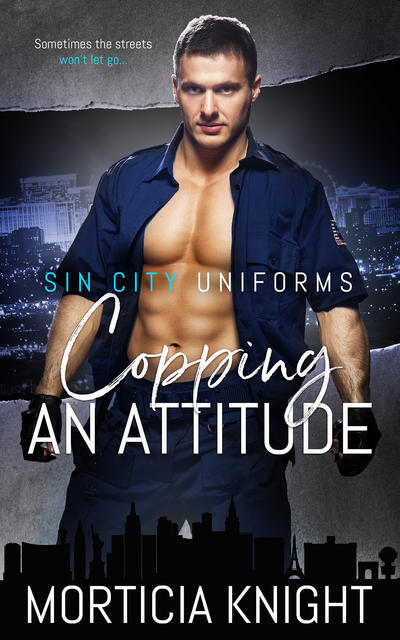 “Valeena!” Slade banged on the motel room door. “Please, Valeena, let me in!”

“What the fuck do you want? Huh? I’ll be done with her ass in five then you can have at it. In the meantime, shut. The fuck. Up.”

He slammed the door with brute force, the windows rattling in response. Slade glanced around nervously. The cops would be looking for him. They could be anywhere. He crouched down behind one of the bushes up against the seedy motel. The dump was right off the Strip and was the place they always used to take their dates. Julio rented five rooms by the week and number six was Valeena’s.

After a short while, Valeena’s trick left and Slade waited until he drove away before coming out from behind the plants. He was just about to knock again when the door flung open. Valeena’s eyes went wide at the sight of Slade’s raised arms, the cuffs holding them together at the wrists.

He pushed past her, anxious to get inside to what suddenly seemed like sanctuary.

“No. Cops. Close the door.” His voice was shaky, adrenaline still pumping through him.

She did as he asked then shut the light off before peeking through the curtains.

“Fuck, Slade. Do you think they followed you?”

She turned to him in the darkness, the glow from the lights outside seeping in beneath the ratty curtains.

“Are you sure? Because if you’re not, I’m hauling my narrow ass out of the bathroom window.”

“Um, pretty sure. I kneed the cop who had me really good.”

Valeena burst into musical peals of laughter. “Oh, man, why do I always miss the good stuff? I woulda loved to have seen that.”

Slade allowed himself a lopsided smile. “Any chance we can get these things off me?” He held up his imprisoned hands, shaking them.

She padded over to the nightstand then turned the lamp back on. “I can’t.” She scrunched her eyebrows together. “But I bet Samson can.”

Samson was a client of Valeena’s, one of her regulars. He ran a questionable business that seemed to involve the need for opening a lot of locks that didn’t have keys. Slade had never questioned her much further than that. She fished around in the drawer of the nightstand that was filled with condoms, lube, lipstick, loose bills and other assorted items until she pulled out her burner phone.

After plopping on the bed and yanking her short silky robe around her, she tapped the screen. Holding the cell to her ear, she winked at Slade.

He perched on the only chair in the room, his stomach still twisting, his nerves still frayed. As soon as Samson picked up, she babbled excitedly to him, obviously softening him up before she hit him with a favor. He’d never heard her talk with such enthusiasm to a client before—she was much better at acting with the tricks than he was.

While he waited for her to get to the point with Samson, he ran everything that had happened with the cop through his mind. A new emotion surfaced from inside him—one he’d thought had been effectively tamped down.

He felt bad. Guilty. He knew he shouldn’t—his survival had been at stake. But it really had seemed as if the cop cared. There’d been something about him that had come across as decent and kind. Not like the asshole cops or almost every other person he’d met in the past few years—along with his own so-called family. Only Valeena had ever been there for him.

Slade tuned back into her conversation, but her voice had dropped lower and she was angled away from him. It was like she was…cooing or something.

Staring down at the silver bracelets locked on his wrists, he recalled how the cop had been so worried he might have hurt Slade, how he’d cuffed him in the front so he wouldn’t add to the pain. His only real pain had been from Harold’s bruises, but he’d used it to his advantage. Once he’d been restrained from the front instead of the back, it had been that much easier to get away.

He squirmed in the chair. It wasn’t his fault. He’d had no choice but to strike out at the cop to get away—the man hadn’t listened to him. Slade couldn’t allow his thoughts to run any further away than that. One of the worst things he or any of the other sex workers could do was allow themselves to wish for something more, something real. His world and relationships had to remain fake no matter what, or else the pain of longing could destroy him.

But if I were ever to have someone to love…

There it was again. Those damn stinging tears. There’d been far too many times recently where they’d threatened to take over. It was pointless to think that a hot guy who led a respectable life would want anything to do with a throwaway like Slade.