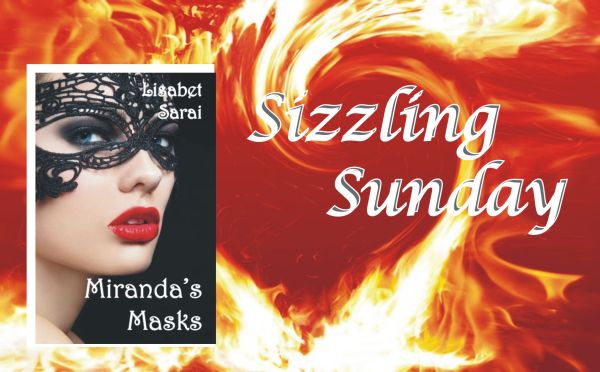 
She dreamed, coherently, lucidly, knowing that she dreamed. She stood before a tall oval mirror, outfitted in full Victorian costume—lace cravat at her high-buttoned neck and lace at her wrists, fitted cuirass waist of fine gray gabardine, gathered overskirt of the same and underskirt of flounced gray silk. Her jet locks were piled high on her head in elaborate swirls and rolls. Garnets set in gold dangled from her earlobes, and a matching brooch adorned her throat. She was holding her breath, it seemed. After a moment, she recognized this pressure as the embrace of her corset, encasing her flesh in a manner that was oddly comforting. She moved slightly, watching her skirts sway gracefully, noting how the gaslight made her jewels sparkle.

“Shall I help you to undress, Mistress?” The voice was familiar, though the inflection was not. Miranda turned to see her roommate Lucy, dressed as a lady’s maid, with a starched white collar and apron and matching cap atop her blonde curls. The girl’s expression was demure and respectful, but Miranda caught a hint of mischievous gaiety underneath the proper demeanor.

“With pleasure, Mistress,” she replied. She began unfastening the dozens of buttons along Miranda’s spine, until the fitted top hung loose from Miranda’s shoulders. Then, coming round to face her mistress, Lucy took hold of the long, tight sleeves and pulled the garment off. Next came the main skirt, which was tied around her waist, then the bustle and underskirt.

As the maid worked, Miranda noticed, she allowed her hands to linger slightly on her mistress’ body—an apparently accidental brush of fingertips across Miranda’s breast—a tracing of her hipline while removing a petticoat—a bare palm on the bare flesh of Miranda’s back as her corset was unlaced. Miranda was sure that these brief touches were deliberate, and meant to inflame her senses.

And so they did. When she stood, finally, wearing only her chemise, drawers and stockings, Miranda noted in the mirror the nubs of her taut nipples, pushing through the fine cotton, the flush on her cheeks, the way her chest rose and fell with her heightened breathing. She could feel the growing tension in her sex, wound like a coiling spring, pressing for release. A warm golden aura emanated from her form, pulsing and flickering like a candle’s flame. The rest of the room grew indistinct.

In the mirror, her eyes met those of the saucy maid, who stared back, boldly provocative, abandoning all pretence of propriety. “And now your hair, ma’am?”

“Yes, Lucy.” The maid removed pins and combs, and Miranda’s raven locks tumbled down over her bare shoulders. Lucy’s fingers trailed lightly down the side of Miranda’s neck, along her collarbone, then into the hollow between her breasts. Miranda felt the tension in her
sex wind tighter.

The dream’s richness of detail, the vividness of sensation, amazed her. The delicate fabric of her undergarments draped loosely on her frame, semi-transparent. Miranda could detect the shadow of her black pubic curls through the cloth. Lightly, she touched herself there, with one finger, and shivered as sparks travelled up her spine. With her other hand, she cupped her breast, pushing it up and outwards so that the chemise was stretched tight and she could see, like a dark ghost, the rosy halo around her nipple. Lucy watched all the while, her blue eyes sparkling with her own lust.

“You are a very naughty girl, Lucy,” she said finally. “I’m not sure what I should do with you.”

“Leave that to us, Madame.” Miranda was startled by a masculine voice, coming from somewhere behind her. She whirled round to find herself confronted by five men in riding clothes, complete with top hats and high, shiny boots. They wore masks, not dominos but flesh-colored contrivances that covered the whole upper half of their faces, leaving only mouth and chin visible.

Her boudoir had unaccountably metamorphosed into a library or study, full of shadows, polished wood and dark leather. A fire burned on a hearth to her right, framed by two oversized chairs.
Directly in front of her, behind the phalanx of masked men, stood a heavy table of carved mahogany. Miranda had a vague impression of glazed floor-to-ceiling bookshelves, statues on corner pedestals, windows shrouded in folds of burgundy velvet.

The man in the middle spoke again. His voice was hauntingly familiar, though he was as anonymous as the other gentlemen who flanked him. “Indeed, Madame, you have been acting most improperly yourself. I expect that my friends and I need to teach you a lesson as well.”

A frisson of fear shook her, followed almost immediately by a surge of arousal. “Lucy, remove her chemise and knickers. Leave on the stockings.”

Gleefully, Lucy obeyed. Miranda felt helpless, somehow, to speak up or object. The common dream-sensation of being rooted to the spot, unable to flee, held her in thrall. Now she stood nude in front of them, blushing with the knowledge that her nipples were visibly erect and that a careful observer would note traces of moisture on her thighs.

The spokesman continued. His companions remained mute. “You are very lovely, Madame, and very depraved.” He turned to one of his assistants, handing him a silk handkerchief. “Blindfold her. It will heighten her shame, and her arousal, to be unable to tell which of us is abusing her.”

The designated gentleman, slightly shorter than the spokesman, followed instructions. He circled behind Miranda, and she closed her eyes in anticipation. Instead of silk caressing her eyelids, however, she felt rough hands on her breasts, pinching and pulling. This hurt, and yet caused the fires in her sex to flare even higher.

After a moment, the man behind her resumed his task. She felt cool silk against her face, then a sharp tug as the knot was tied. All was blackness as she was led toward the table.

Yet, this was a dream, and dreams are fundamentally visual. Thus, even though Miranda experienced the deprivation of sight, and the intensification of her other senses, she also found herself looking on the scene from the outside, like a disembodied presence, or perhaps, the scene’s director.

Two of the men lifted her onto the polished mahogany surface and positioned her there, on her back, near one end of the table. They bent her legs at the knee and spread her thighs, so that her sex was open and exposed to all of them. Though she did not struggle, two men took hold of her ankles as if to restrain her. She felt motion and warmth there, between her thighs, and when the leader spoke again, she could tell he was very close.

“You are in our power, Madame You are clearly guilty and deserve punishment. And yet you are obviously, shamefully, wet with perverse desire.” He ran one finger swiftly through her folds, from back to front, ending with a sharp flick to her clit. She squirmed uncontrollably. Then he held the finger below her nostrils, forcing her to breathe her own sharp, musky scent. “You are wanton, Madame, and should be whipped.”

Miranda smelled leather, and felt a light touch running down the inside of her thigh. His riding crop—she was certain. At one level she was terrified. She wanted to protest that she was innocent—though she knew she was not—to beg for mercy. Yet she was silent, seething with passive lust, secretly inviting him to torment her, to mark her, to use his power over her. Her body shuddered, half in fear and half in frustration.

The unseen man laughed a little. “However, I am feeling merciful, and so the only rod you will suffer tonight will be made of flesh.” He paused for two beats. “Starting with mine.” And with no preparation or warning, he plunged a rock-hard dick into her depths.

Miranda screamed, with surprise, pain and pleasure, so mingled that she felt her senses swimming. He rode her with a fury that left her no respite. With each stroke, it seemed that his cock grew thicker and longer, so that she feared she would burst. Now her other eyes were closed, and all she knew was sensation in the dark, sensation so acute that she thought she would faint.

Meanwhile she smelled man-scent and sensed another cock above her, prodding her lips open. Obedient, hungry, she sucked this new cock into her mouth even as her cunt swallowed the first.

The owner of the cock in her mouth pulled out, though she sucked hard, trying to hold onto him. A loud grunt issued from his throat, then semen splattered her face. She licked her lips. The strange, acrid taste made her want more, more of anything they were willing to give her.

“You dirty girl, you like that, don’t you?” It was the leader, close to her ear. “You would like us to come in your mouth, on your tits, in your cunt, in your ass. Wouldn’t you?”

Miranda still could not speak, but she nodded. It was true, all true. She would give them anything they wanted, these strangers. She craved their touch, their caress, their abuse. 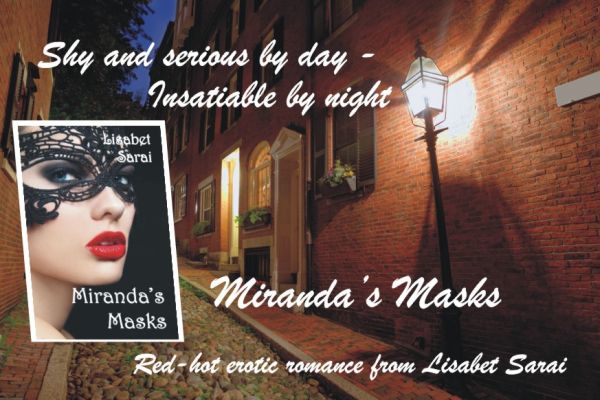