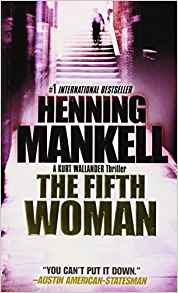 About two weeks ago, while on a business trip, I started reading The Fifth Woman by Henning Mankell When I returned home, I found I didn’t really want to pick up anything else, not until I’d finished it. This bleak, brutal mystery is not at all my typical fare, but for some reason, it grabbed me and wouldn’t let go.

The Fifth Woman begins with a letter from Africa. A Swedish woman, a tourist, has been slaughtered in a terrorist attack, along with four nuns. Her embarrassing death has been covered up by the corrupt authorities, but a female investigator has taken the initiative to inform the woman’s daughter. This vicious murder sets the tone of the novel, yet really does not affect the plot, except that it becomes the trigger for the daughter to initiate a long-planned campaign of vengeance.

Mankell starts by showing us the inner life of the serial killer. We don’t know who she is, but we taste her cold hatred for her victims and sense the brittle logic of her insanity. This glimpse into her mind has a compelling intimacy. The author repeats these visits at intervals throughout the book, without revealing the killer’s identity or her underlying motivation. At once both tantalizing and disturbing, they become addictive.

The next chapter adopts the point of view of her first victim. Of course, we don’t know at the start that he’s marked for a cruel and unusual death. Holger Eriksson seems like a reasonable man, in his seventies, a bit solitary, a retired car dealer who now writes poetry and is passionate about birds. Why does he deserve to be impaled on sharpened bamboo stakes at the bottom of a ditch?

Only after we’ve met the murderer and one of the murdered does the narrative shift to the main character, police inspector Kurt Wallander. He has just begun to recover from a horrific case over the summer, tracking down a vicious serial killer. A recent vacation in Rome with his father has given him some new hope for his future. Then Eriksson’s mangled body is discovered and he’s thrown back into the middle of a nightmare.

Wallander is very much an anti-hero. He’s forgetful, disorganized, depressed. He wonders why he continues to serve in the police force when he doesn’t even make enough money to repair his aging car. Yet he has a level of dedication that is both admirable and crazy. He feels responsible not only for solving the crimes, but also for the well-being of his subordinates. As two more men die in ways clearly intended to make them suffer, Wallander struggles to piece together the clues and to understand the killer’s “language”.

One Amazon reviewer criticized this book as boring, with dozens of false leads, exhausting crime scene surveys, interviews that don’t yield results, and fruitless meetings of the investigation team. I believe this repetition to be intentional. The author shows us that police work is neither glamorous nor exciting. It depends on meticulous research and careful logic. At the same time, there’s an intuitive component. Wallander does not dismiss his feelings or his hunches. More often than not, they turn out to be valid.

The Fifth Woman is set in the flat, windswept southern part of Sweden, during the fall and early winter. Vivid descriptions of the harsh landscape contribute to the dark mood of the novel. Wallander’s home town Ystad in autumn is chilly, blustery, and foggy. Night falls early. There are echoes of violence and discontent everywhere, too, the grand social experiment of Sweden not necessarily fulfilling its golden promises.

So this is not a happy novel, though in the end Wallander apprehends the murderer. I’m really quite puzzled as to why I found it so compelling. In fact, I was somewhat disappointed when the killer’s motivation was finally revealed. Her personal experiences seemed insufficiently traumatic to have generated such a lust for revenge.

I guess I kept reading because I did want to understand the killer’s motivation. I wanted to see Wallander figure it out, too. When he does, though, there’s little satisfaction to be found in his success. The cost to him and his team has been high. Meanwhile, he has spent long enough trying to comprehend the murderer that he can’t help feeling some empathy for her.

I have to say, I loved this ambiguity, so different from many mysteries. Ultimately there are no heroes or villains, only human beings trying to survive.