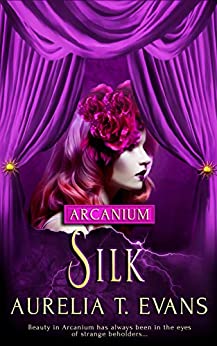 Seraphina, the youngest daughter in a powerful Fae royal family, used to be exquisitely beautiful. Then the bear shifter to whom her parents betrothed her destroyed half her face, trying to break her spirit. Ursalem doesn’t care what Sera looks like; he just needs her as a mate, to produce the dozens of Bearskin offspring required to rebuild his depopulated tribe. Though raised with the knowledge that she’d marry not for love but for politics, Sera refuses to accept an immortal life as a brood-mare. She flees to the only place where a hideously deformed creature such as she has become might be welcomed and succored – Arcanium.

Immortal djinn Bell Maddox has reservations about providing Sera with sanctuary in his supernatural circus. Her people were complicit in the recent demonic invasion and occupation of Arcanium. Nevertheless, her spirit, her despair and the magic he senses within her – not to mention his curiosity and love of contradictions – persuade him to accept her as a new performer and freak for his Oddity Row.

For fifty years, Sera has retained her virginity in preparation for her arranged marriage, her self-restraint reinforcing her chastity magic. In the libidinous atmosphere of Arcanium, among incubi, succubi, and ancient fertility gods, how can she continue to resist the call of the flesh? And if she succumbs to desire, what wonders or terrors will her power wreak?

I’ve been a devoted fan of the Arcanium series ever since Aurelia T. Evans published Fortune in 2015. I’ve reviewed many of the books here on this blog.

I love the genre-twisting complexity of these novels, genuine horror mixed with incendiary arousal, romance entwined with raw lust. Ms. Evans conveys a genuine appreciation of the weird, an affection for outcasts, and a gender-blind recognition that sexual desire is far more complicated than most romance readers are willing to admit. Most of all, I savor the moral ambiguity of Arcanium. Bell is neither benevolent nor evil, but something in between, a force of nature that can’t be constrained by human definitions of right and wrong.

Unfortunately, I haven’t yet read Haunted and Skeletons, the two novels that precede Silk. This interfered, to some extent, with my appreciation of this installment, which refers to the events that occurred when Arcanium was temporarily taken over by hostile forces. I don’t know the details of what happened, but it’s obvious this interlude fundamentally changed Arcanium, and Bell. Some of the denizens of the circus have left, new members have joined, and those who remained are clearly traumatized.

Thus, I was left to fill in the gaps in reading Sera’s story.

As a whole, however, I was somewhat disappointed by Silk. There’s an awful lot of talking, long philosophical conversations that slowed the novel’s pace. I also felt that threads of horror that run through the series were far less compelling in this installment. The author mentions some of her creepiest creations, such as The Gentleman and the clowns, but they don’t take center stage. Sera herself, despite her disfigurement, does not inspire any sort of fear or disgust. Perhaps we’ve come so far in accepting the horrific oddities of Arcanium that they’ve lost the power to terrify.

Of course it’s difficult to maintain the intensity and the freshness of a series across ten books. This is particularly true when the author’s fictional world is intended to be scary and shocking. As with any experience, we become accustomed to the violations of convention that originally made the circus so electrifying. For me, who has read seven previous in the series, entering the gates of Arcanium feels like coming home. I look for the characters with whom I feel the strongest bonds. On the edge of my seat, I wait for Bell to engineer some impossible choice for one of his creatures. I know what to expect – but in fact, that expectation diminishes the effects.

I need to go back and read the books I've missed, though. I’m not tired of Arcanium yet.