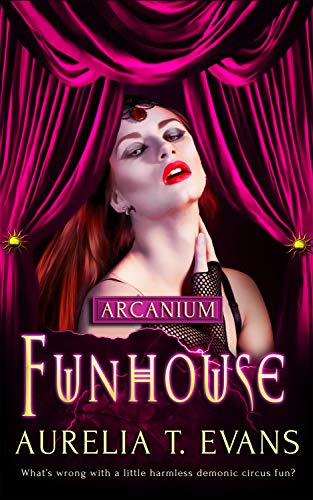 I just finished Funhouse, the seventh book in Aurelia T. Evans’ incredible Arcanium series. Arcanium is a demonic circus controlled by ancient djinn Bell Madoc, a perversely charming chameleon who gets his kicks fulfilling people’s casually expressed wishes in ways that bind them to the circus. In general, I’m not a fan of series; I find that after a few books, they become overly formulaic and lose their zest. I’m still enchanted by Arcanium, though, largely due to its moral ambiguity.

Horrible things happen in Arcanium. People are disfigured, tortured, even devoured. The demons who populate the Oddity Row and perform under the big top don’t subscribe to any sort of human moral code. They’re happy to feed their lusts on human flesh and even human life. The humans who have attacked Arcanium and are in the process of being punished can be even more reprehensible.

At the same time, Arcanium offers a sort of sanctuary for individuals who really don’t fit in the outside world, as well as a path to self-knowledge. Neve, the protagonist in Funhouse, is a fine example. A brilliant PhD biologist who happens to also be a voluptuous redhead, Neve has never felt sexual desire. She marries Joseph because they enjoy one another’s company and have similar tastes – both are fans of Rocky Horror and H.P. Lovecraft – but though she tries to satisfy her husband, she feels no physical pleasure herself. This tears their marriage apart and brings Neve into Arcanium, when she wishes, in Bell’s presence, that she could “experience sex the way her husband wants her to do”. She becomes a sexually insatiable creature, suffering constant torment from the simple sensation of clothing on her super-sensitive skin. Arcanium is drenched in sexual tension, and Neve could easily find partners among the demons or the humans, but having been objectified all her life due to her opulent body, she resists.

I liked Neve a lot, but the actual plot in Funhouse wandered a bit. In particular, I found the end a bit unsatisfying, since there’s no real resolution to Neve’s dilemma, other than her increasing acceptance of her abnormal state.

Nevertheless, I’m sure I’ll purchase Haunted, the next installment, since I gather it continues Neve’s story.

It wouldn't have been my choice, but Neve's story ended up too long for one novel, so I ended up having to split it right in the middle at the best ending that I could in order to get it published at all, but that meant it ended at the conclusion of Act 2, which of course doesn't quite satisfy. Hopefully, HAUNTED rounds out the experience. And it should be the only novel broken into two in the series.

A pleasure, as always!