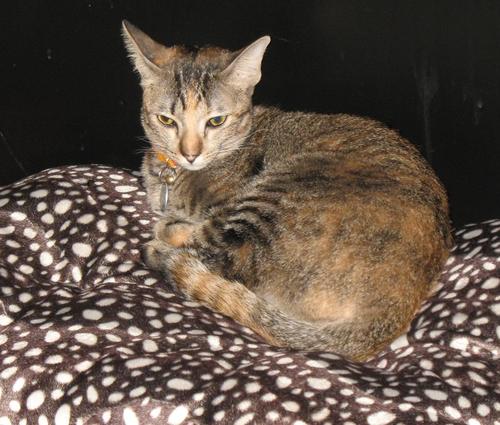 The earnest little kitten above is Katie*. Like all of the felines with whom I’ve shared my adult life, Katie is a rescue cat. We adopted her at the age of three months from our vet. According to the story we were told told, someone brought her in to the animal hospital when she was only a few weeks old. Apparently she’d had been in an accident and had broken her front leg. The wound had become so seriously infected that they had to amputate part of her paw to save her life. Indeed, if you look closely at the photo above, you’ll see that she’s missing the toes on her left foot. X-rays of her shoulder show a permanent partial dislocation.

Katie’s now a strapping three and a half year old, curious and lively. She has a limp when she walks, but this disappears when she’s chasing our other rescue cat, Simon*. He’s a mostly-black beauty with golden eyes and a kinked tail, who loves to curl up in bed with me, purr in my ear and lick my chin. When Katie was an only cat, she used to nip our toes and gnaw on our fingers. Now she chews on Simon’s ears and chomps on his neck. He doesn’t seem to mind at all. Meanwhile, we’re grateful that she’s found an alternative target for her oral aggression!

Simon lived in a cage for the first ten months of his life. Given that social deprivation, it’s astonishing that he developed such an affectionate, easy-going personality.

Our neighborhood abounds with stray cats. Kind-hearted locals feed them, so of course they stick around, mate and reproduce. There’s one female, in particular, who given birth to at least six litters (that we know about). We’ve tried to catch her in order to have her neutered, but she’s more or less feral and won’t let us come close.

So there are always kittens around, and we’re constantly tempted to adopt a couple more. But realistically, we couldn’t handle this. We live in an apartment, just the two of us. If there were a fire, we’d have to grab the felines, stuff them in cages, then carry them down six flights of stairs. Given our age and physical condition, two cages is our limit. In addition, we do quite a bit of traveling. Our part-time housekeeper cares for the kitties while we’re away, but I think she sees even two cats as a weighty responsibility.

Our friend on the fourth floor, on the other hand, has taken in at least five of these neighborhood kittens, as well as rescuing cats from the highway and from the roof of a nearby shop. We’ve lost count of how many felines he and his family have, because they keep some at his office, some at the restaurant they run, and some in their apartment.

Another friend, a woman I work with, has zero ability to resist strays. At present she’s caring for eight formerly homeless cats. The social interactions among these creatures is extremely complex, so she has to keep them in different rooms in her house, feed them at different times, and so on. Her life more or less revolves around the cats’ needs.

When I look at these two friends, I feel pretty guilty. Are my husband and I really doing all we can to save these furry beings from hard and dangerous lives on the street? Don’t we have the money – and the love – to spend on a few more?

What is enough, though? No matter how many homeless cats we adopted, there would always be an unending supply. It seems more reasonable to acknowledge our limits, and to do what we can to stem the tide. So we support the animal shelter and its spay/neuter programs. We share information about animals who need homes. Of course we neuter our own pets.

Worrying about stray animals gets me thinking about homeless people. We have an extra bedroom. Most of the time, except when we have out-of-town guests, it’s empty. Should we offer it to someone who needs a roof over his or her head? Isn’t it selfish of us to squander this resource? Is it our responsibility to rescue our fellow human beings?

It’s easy to feel overwhelmed by all the pain, tragedy and sorrow in the world. There are no easy answers. I do what I can. I edit altruistic erotica anthologies for Coming Together. I run my monthly Charity Sunday events. I rescue a few kitties and resolve to give them the great life that they deserve.

* Names have been changed to protect the cats’, and my, anonymity.

Whenever I get those junk mailers with pre-printed return address labels just for me, or gift cards, or whatever else they think will twiddle my guilt knob and make me send them money, as I rip them in half to put into the recycle bin, I always say, "If I gave to every deserving charity, they'd have to start a charity FOR me, because I'd quickly run out of money!" That was starting to happen with my MIL before my husband and his sister removed her checkbook from her possession. She's got dementia, and was sending big checks to organizations--all worthwhile, I'm sure. But she needs her money to live on.

I donate as I can. Less this past year, of course, because I've been unemployed since last March. I'll be subbing again next week, then sporadically until mid-May, when a teacher is going on her maternity leave, and I'll take her classes through to the end of the school year.

It will be good to have money of my own again.And maybe I can participate in your Charity Sunday blog hop again.

I think we all do what we can, to contribute to the positive karma that surrounds the planet. I try to keep guilt in abeyance. However, if I were to somehow get a sudden windfall (not likely--no rich relatives, and I don't play the lottery) then I know just which charities I'd give much of it to.