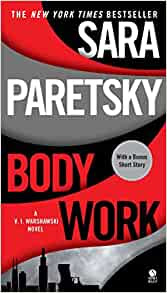 The Body Artist is the latest sensation on the Chicago club circuit. Naked aside from a thick layer of make-up, against a background of shocking imagery focusing on violations of the female body, the mysterious performer invites members of the audience to use her skin as their canvas. One young woman named Nadia paints the same designs, night after night – a girl’s face surrounded by flames and fleur de lis emblems. For some unknown reason, the painter’s work enrages Chad, an Iraq veteran, to the point that his soldier buddies have to restrain him. When someone shoots the painter and leaves her lying in a pool of blood in the alley behind the club, the police arrest Chad as the most likely suspect, having found the murder weapon in his apartment. He can’t defend himself, though; he’s in a coma from a drug overdose that police assume was a suicide attempt. Sure their son is innocent, his parents hire private investigator V.I. Warshawski to try and clear his name.

The scenario described above barely hints at the complexity of the plot in Body Work. Corporate corruption, money laundering, drug dealing, computer hacking, prostitution – the network of crimes and relationships that Sara Paretsky’s P.I. must untangle would be enough to discourage almost anyone. V.I. “Vic” Warshawski isn’t optimistic that she’ll succeed, but she’s also not a person who gives up, especially when faced with an obvious betrayal of justice.

Body Work follows V.I.’s stubborn, persistent and occasionally reckless efforts to unravel the mysteries that swirl around The Body Artist. The deeper she delves, the more desperate and violent her opponents become. She’s badly beaten in a street fight and wounded in an arson attempt. As she comes closer to working out the truth, she knows that she’s endangering the innocents in the sordid affair: Chad’s and Nadia’s families, including Nadia’s precocious teenage sister Clara, and her own niece Petra, who worked at the club where The Body Artist performed. But people are depending on her – and more people may suffer if she backs down.

Sara Paretsky does an excellent job pulling together the myriad threads in the tapestry of her mystery. However, I don’t read her books for the plot, but for the characters and the atmosphere.

There’s a reason that V.I. Warshawski has featured in twenty successful novels since 1982. She’s so fully fleshed that it’s difficult to believe she’s a fictional creation. (Her Wikipedia article comprises multiple pages.) The product of a dangerous childhood on the rough streets of south side Chicago, she’s tough, intelligent, resourceful and as unrelenting as a bulldog when she’s trying to bring a measure of fairness to an unfair world. Sara Paretsky has chosen to age her heroine over the course of the series. In this book, written in 2010, Vic is in her late forties, and feeling the effects of middle age. There’s a world-weariness in her that rings true. She recognizes that she doesn’t have the same level of energy as in the past – but that doesn’t stop her from pushing herself to edge of endurance and beyond. She’s hardly perfect, but her strong moral compass makes her truly heroic.

The other characters, both recurring and specific this novel, are equally rich and distinctive. I particularly liked Chad’s Marine friend, Marty Jepson, and the spunky, quick-thinking Clara.

The other thing I love about the V.I. Warshawski stories is their distinctive sense of place. All of them (or at least, all that I’ve read) are set in Chicago, with its myriad neighborhoods and ethnicities. The descriptions of the city don’t burden the plot, but they add to the realism, and often, the mood. This novel takes place in the winter. The frigid temperatures, icy streets and blustery winds represent realistic obstacles to V.I.’s investigation, but they also create a sense of bleak hopelessness that pervades the book.

Body Work is a dark book. Although Vic manages to solve the multiple crimes and expose the evil doers, not all of them suffer the consequences of their actions. Meanwhile, the dead remain dead. This is not romance, and there’s no HEA. Still, the book concludes on a note of hope. As a reader, you have to believe that fighting for what’s right is worthwhile, that it adds to the universal balance of good.