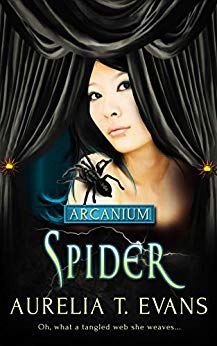 There aren’t too many authors whose books I’ll buy on release day, but Aurelia T. Evans is one of them. When I saw the November 6th announcement in the Totally Bound newsletter, I hesitated only long enough to start up my special e-commerce computer in order to purchase a copy of her latest novel Spider.

Spider, the sixth book in the fascinating and disturbing Arcanium series, brings readers back to the alluring, terrifying circus created and nurtured by ancient jinni Bell Madoc. For Bell, Arcanium is simultaneously a plaything, a work of art and a cosmic mission. The appeal of his edgy big top performances and horrible but fascinating Oddity Row depends on his “people”: captive demons, human misfits, and unfortunate innocents whose unintentional wishes have bound them to the circus. Although Bell is capricious and can be cruel, he’s also exquisitely sensitive to the secrets that haunt visitors to Arcanium. The transformations he works upon those whom he entangles via their wishes make those secrets visible.

Elizabeth, the protagonist of Spider, lives her life in fear: fear of heights, fear of darkness, fear of insects, fear of disease. A member of a conservative, Amish-like religious cult (in fact, the illegitimate daughter of its prophet), in public she covers her hair and every inch of skin apart from her hands and her face. Like many unmarried daughters of the Petrosian Saints, she works as a nanny; Christian parents view the modest, sober, serious Petrosian women as ideal care-takers for their children.

A mistake leads Elizabeth to takes her charges on an afternoon outing to Arcanium—a mistake that will change her life forever. Trying to keep track of a teenager, a ten year old, a toddler and an infant, she idly wishes she had extra hands. Bell pounces upon her figurative statement. He has her abducted, brings her to Arcanium, and magically bestows another pair of arms and another pair of legs, turning her into his human spider. Then he installs her in his dreadful “fun house”, actually a prison he has created to punish evil-doers who have threatened Arcanium. Visitors assume the bloody horrors of the fun house are fake, but Elizabeth soon learns that every terror is real.

Totally Bound is a romance publisher, yet Ms. Evans’ books break every romance rule. That’s probably one reason why I love them. Here’s the publisher’s Reader Advisory for Spider:

Definitely not a book for the faint of heart! At the same time, none of this content is gratuitous, inserted just for shock value. Like many of the characters in the earlier Arcanium books, Elizabeth is broken inside. Strange as it might seem, her ordeals contribute to a sort of healing.

I find Arcanium’s mix of terror and eroticism refreshing and deeply enjoyable. Even after six books, Bell can still inspire my wonder. He wields incredible power, but he’s constrained by free will. His moral ambiguities fascinate me. He loves his people, yet also tortures them. He leads them to deeper self-understanding even as he selfishly uses them to increase the popularity of his circus. In this book, one character, with powers of his own, comments that Bell came into being before good and evil, that he is born of primordial chaos.

This book is the first in which Bell’s omnipotence is seriously challenged, by a mysterious outsider. I’m assuming that Ms. Evans is working on another volume that will explore this plot twist. I only hope it comes out soon!

My reviews of some of the earlier Arcanium books:

Imagine how delighted I was to see this! I'm glad you're still enjoying the Arcanium universe.

It's so funny to see all the elements of Spider spelled out, because it really does all seem random like that, like I pulled elements out of a hat. But Arcanium's people come from all sorts, and this is the story I wanted to tell.

Thank you so much for the lovely review, and hope you continue to enjoy where Arcanium takes you.

Hi, Aurelia! I'm so glad you dropped by. We've been out of touch for a while, so I'm not sure I have your email. Otherwise I would have sent you the review -- and a thank you for writing such an amazing, unconventional series. I find most of what is published these days so boring - your work is a breath of fresh air.