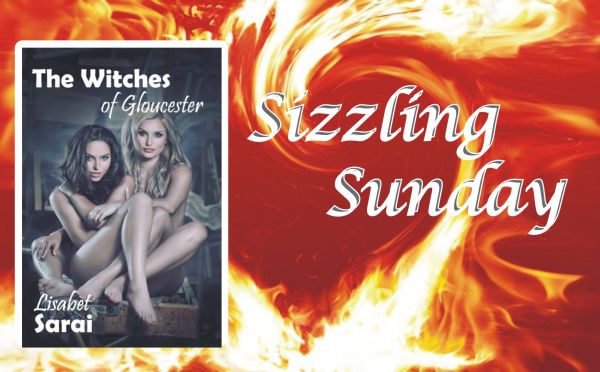 I realized yesterday that we’re nearly half way through Pride Month, and I’ve barely celebrated. As a first step toward remedying this oversight, here’s a sexy snippet from my lesbian paranormal romance The Witches of Gloucester. This excerpt isn’t as explicit as some of my Sizzling Sunday posts, but it sets the scene for what follows.

“Young. Ethereal. Full of light. Wait, I’ll show you.” The witch padded on bare feet over to the wooden sea chest across the room to pull out a length of navy blue cloth printed with yellow-gold stars. She spread it over the braided rug that took up most of the floor. “Come. Sit with me.”

While Marguerite settled herself cross-legged upon the starry throw, Beryl retrieved a half-melted sapphire-blue candle from a shelf above the bed. She arranged it upon the cloth between them, then passed her cupped palm over the charred wick. “Illumine,” she declaimed.

The candle spontaneously ignited. At the same time, the afternoon dimmed. Sudden dusk descended. The blue-edged flame glowed, but did not dispel the gathered shadows.

“Look into the fire,” Beryl instructed.

Marguerite tended to use crystals or mirrors for divination. It took a few moments for her to discern the forms moving in the flickering brightness. As she focused her attention, the image grew more distinct.

A diminutive young woman even paler than Beryl sat reading at an old dinette table. Straight silver-blond hair cascaded down her back, almost to her waist. Her black tank top showed off a surprisingly deep cleavage for someone with such a petite frame, while her brief shorts clung to what looked like a heart-shaped ass.

Concentration knotted her eyebrows. Her rosy lips were pursed into a moue of dissatisfaction. She appeared to be struggling to comprehend the material. Or perhaps she was just restless. After a few moments, she snapped her book closed, rose from her chair and wandered over to peer out at the forest of masts visible through the open door. Her movements were like willow branches in the wind. Her hair shimmered in the sun, a platinum river. Marguerite’s theory about the woman’s ass was confirmed.

“It’s possible,” Beryl replied to the unspoken question. “But how can we draw her to us? You know the rules. We can’t use magic to bind her. She must come to us of her own free will.”

“Ask to borrow a cup of sugar?” Beryl chuckled as she leant over the candle to brush an ebony curl out of her lover’s eyes.

“Something like that.” Marguerite stared once more into the heart of the fire, at the slender form leaning against the door frame, gazing into the distance. “She looks lonely.”

Marguerite released an uncharacteristically girlish giggle. “We may be able to help her with that problem.”

Audible: https://www.audible.com/pd/The-Witches-of-Gloucester-Audiobook/B07MQMS93
Posted by Lisabet Sarai at 3:00 AM