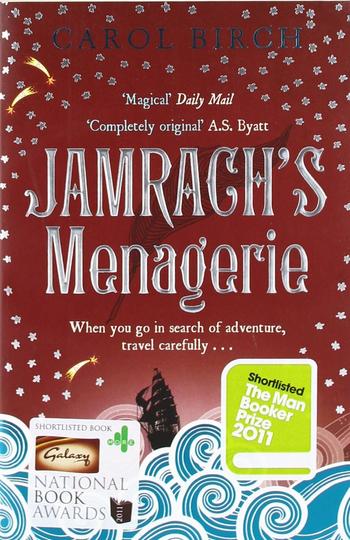 “I was eight years old... I know we came in time to the streets about Ratcliffe Highway, and there I met the tiger. Everything that came after followed from that. I believe in fate. Fall of the dice, drawing of the straw. It’s always been like that.”

Jaffy Brown is a poverty-stricken urchin living in the churning chaos of Victorian London, when his fate finds him. A tiger escapes from the establishment of Mr. Jamrach, who buys and sells exotic animals, and Jaffy is so enchanted by the magnificent beast strolling down Watney Street that he walks up and strokes its nose. The tiger casually attacks hm, but he escapes unharmed. Impressed by the boy’s courage as well as his obvious connection to animals, Jamrach offers Jaffy a job caring for his merchandise. And as Jaffy says, the rest of his life flows from this event. He meets Tim, another of Jamrach’s boys, and his frustrating but enticing sister Ishbel. Jaffy and Tim sign on to a whaling ship which has also been tasked with bringing back one of the dragons rumored to live on a remote island in the South China Sea. The expedition finds and captures one of these fearsome and disgusting creatures, only to have it escape. Some of the ship’s crew believe that the terrible storm that follows represents their punishment for stealing the beast from its home. In any case, the vessel sinks, leaving the crew to drift helplessly in their fragile whale boats and to die of hunger, thirst, disease or madness – one by one.

Jamrach’s Menagerie is a brilliantly written, unconventional tale of one man’s astounding journey. The author brings the Victorian period to life in all its color and filth. Her detailed description of the process of whaling is more vivid, and distressing, than anything Melville ever wrote. Meanwhile, the chapters devoted to Jaffy’s harrowing weeks lost at sea were so realistic and painful that I sometimes had to stop reading after half a dozen pages.

In the interest of avoiding spoilers, I won’t reveal any more of the plot, except to share the fact that Jaffy does survive and find something like a happy ending, but not an easy one. I deeply enjoyed this book, and the imaginative, adaptable, observant character of Jaffy – but from an emotional perspective I found it a difficult read.

This book doesn’t really fit neatly into any category or genre. It includes adventure, love, tragedy, philosophy, poetry, even a touch of magic. Carol Birch makes the Victorian era deeply real, and I gather than Jamrach actually existed, yet I wouldn’t call it an historical novel in the typical sense. It’s a story about the choices we make and their totally unanticipated consequences, about friendship and death, guilt and redemption, and throughout, about the birds and animals who share our planet.

Jamrach’s Menagerie is truly original. That’s only one of the reasons that I recommend it highly.