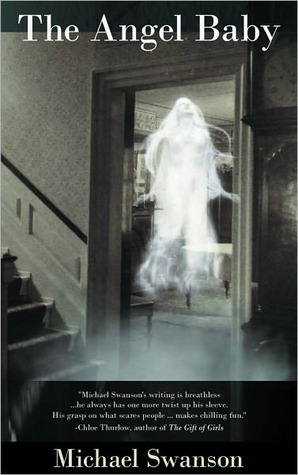 An elderly woman lying dead in a decrepit shotgun shack, an expression of utter terror frozen on her face. The battered and emaciated corpse of a four-year old girl, discovered floating in the bayou in a plastic storage crate. A Victorian era mansion owned by the ambitious, no-nonsense assistant DA Callie Giesler, haunted by the dark echoes from the past. A powerful, heart-searing apparition, terrifying, disgusting and seemingly unstoppable.

Horror isn’t one of my favorite genres, though I’m a fan of Clive Barker and Edgar Allen Poe. However, a friend read The Angel Baby, and raved about it, so I thought I’d give it a try. I’m glad that I did. The Angel Baby is carefully plotted, with vivid, three-dimensional characters, cleverly managed suspense and a wonderful sense of place. I will admit that in my ignorance as a New Englander, I’ve always viewed Texas as a bit uniform and boring, but Mr. Swanson brings the history and distinctive atmosphere of his native city Houston to life. His gripping account of the Great Galveston Hurricane in 1900, which killed between 6,000 and 12,000 people in a matter of hours, made a fitting backdrop for his macabre tale of deathless evil.

Most of the novel takes place in present day Houston, which features both upscale mansions and decrepit slums. Bossy and abrasive Callie Giesler is the central character, but the most fascinating of Mr. Swanson’s creations is air-conditioning technician and ghost hunter Noel Guidry, a Hurricane Katerina refugee who has escaped with his wife and daughter from his devastated home city to settle in Houston. When we first meet him and his partner Ray, they’re conducting a highly scientific effort to evaluate, and probably debunk, reports of supernatural phenomena in Callie’s house. However, it soon becomes clear that there’s more to the glib, good-looking black man than meets the eye. Noel’s a seer. He’s had encounters with ghosts and other paranormal entities in the haunted city of his birth. He knows that evil spirits are real, and a real threat to the living.

I don’t want to share too much of the plot, since like most horror tales this one depends to some extent on the element of surprise. I will warn you, though, that there’s no happy ending – that, on the contrary, many of the characters are killed by the Angel Baby, the terrifying and convincing entity at the center of the story.

In fact, many of the most evil creatures in this tale are human beings – cruel, abusive, or heedless individuals who perpetrate terrible crimes, motivated by twisted desire or callous self-interest. In a sense, the Angel Baby is their creation – a reflection of the darkness in some human hearts. Or perhaps, as Noel believes, she is a demon attracted to evil, growing in power as she feeds on human cruelty and fear.

This book made me feel deeply uncomfortable, but I guess that’s why people read horror. I normally read before bed; I found I had to close the e-book file and pick up something lighter, to distract me, before going to sleep, or I’d have disturbing dreams. Nevertheless, despite the very real distress caused by this book, I felt compelled to read to the end – to discover whether evil actually triumphs.

If you’re curious, and brave, get yourself a copy of The Angel Baby, and find out just how dark things can get.

The Angel Baby sounds really interesting! I'll keep an eye out for it.