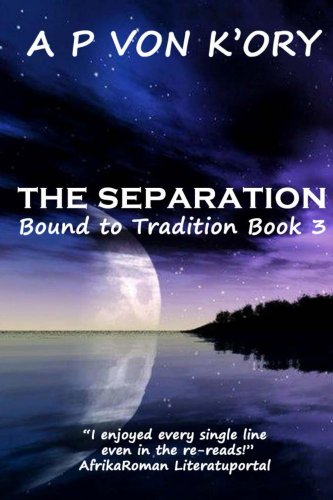 Bound to Tradition: The Separation by A P von K’Ory
Amazon KDP, 2013

Businessman Erik Lindqvist – nicknamed “Viking” - has problems with women. He doesn’t trust them; fundamentally he believes they are all untrustworthy sluts who exist only to be used and discarded. That’s how he treated all his many lovers, until he met Khira, the brilliant and beautiful sixteen year old from the Kenyan Luo tribe who stole his heart. Despite her youth, Khira seems to have tamed the beast in Erik. Her upbringing as a Luo woman has given her a unique perspective on men and sex. Men are “muscled infants” who must be indulged but also guided by the women, who are goddesses on earth. Khira and Erik have a rather unconventional marriage in which Erik is still free to expiate his lust with other women. At the same time, they are deeply devoted to one another and to their beautiful and talented children.

When Khira secretly takes their pubescent daughter Loyana back to her tribe to be initiated into the mysteries of goddesshood, and Loyana falls ill as a result, all Erik’s rage against women rises to the surface. He brutally assaults his beloved Khira, sending her into a coma. Coming to himself, he realizes that he may well have killed the person he loves most in the world. Both Khira and his children desperately need him, but he can’t cope with the guilt and the responsibility. Despite his mostly happy marriage, he still hasn’t resolved his mistrust of the female of the species.

The Separation is the third and final book in A P von K’Ory’s dramatic Bound to Tradition trilogy. The second volume ends with Erik’s attack on Khira, and his subsequent desperate attempts to get her out of the African bush and into medical treatment before she dies. As the third book opens, Khira has been unconscious and unresponsive for days. Erik is half-insane with grief and guilt. Their five children are traumatized, especially Loyana who witnessed Erik’s attack on her mother, and who feels that she is at fault for agreeing to the initiation. Khira’s closest friend Joyce arrives from Kenya to help care for the family during the emergency. Standing in for Khira, she’s willing to confront to Erik and force him to accept what he’s done.

This book was not what I expected. From the title, I thought that Khira would recover, but that she’d break away from the unpredictable and violent husband who almost killed her, living separately from him despite their mutual love. Instead, Khira remains in a coma throughout most of this novel. The “separation” relates to the fact that she and Erik cannot communicate at all.

However, despite her outward passivity, Khira’s mind is still active. A P von K’Ory is very convincing in her portrayal of Khira’s inner life, as she struggles to understand what has happened, to remember who she is, and to recognize the people around her. She can hear; she can form intentions. However, she cannot, especially at first, command her body to act on those intentions – even something as simple as moving a finger. These visits to Khira’s mind are devastating.

Much of the novel is dedicated to Erik’s attempts to run away from himself and his responsibility for Khira’s condition. I have to say that I found him infuriating. Despite the almost supernatural connection between him and his wife, he just can’t manage to face his own flaws. One can’t help but believe that Khira would be better off without him.

In the end, love triumphs, though I sense there will always be scars that won’t fully heal. Khira fights her way back to consciousness and to her family. Erik finally begins to work on his deep-seated emotional issues. The book concludes with an event full of hope for the future – an event that sets the stage for A P von K’Ory’s second series, Golden Shana.

As hard as it was to read about Erik’s behavior, I enjoyed The Separation. Like the previous books, it is full of vivid descriptions and intense emotion. It does not focus as much on the conflict between Erik’s and Khira’s worlds as the first two volumes of the trilogy, but that tension always exists under the surface. You can’t help wondering when it’s going to explode once more and fracture their lives.

Thank you for another lovely review, Lisabet. The Bound to Tradition books remain my favourite series not only because they won me awards but also because a lot of Erik and Khira's story very much reflect my true life's story.

I tried posting weeks ago but couldn't "publish" for some reason. Let's hope this now works.