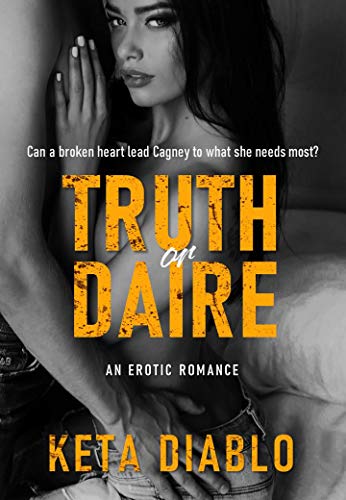 Cagney Kissler has been saving her V-card for that special someone. When her good-looking, fast-talking temporary flatmate Daire finally manages to seduce her, she wonders why she waited so long. Then she comes home from her job at Bloomingdale’s with her brand new, sexy lingerie, anticipating another night of delirious pleasure, and discovers he’s a lazy, lying cheat who’s just using her so he’ll have a place to crash. She kicks him out, but the damage to her self-esteem is not so easily repaired.

Fortunately, she has already planned a week-long winter escape to visit her best friend Lily in Fort Myers, Florida. The warm sun and the tropical environment are just what she needs to help her get over her heartache. When she meets Evan Truth – gorgeous, wealthy, considerate and insightful – she discovers how shallow her feelings for Daire really were. Evan’s kiss ignites her; his touch drives her crazy with desire. Meanwhile he’s such a decent, generous soul that she can’t help falling in love. But Cagney’s time in Florida is short and she knows Evan can never be more than a holiday fling. Flying back to her empty life in frigid, gray Chicago might be the hardest thing she’s ever done.

Truth or Daire is a brief but engaging erotic romance that does a fantastic job portraying the connection between two soul mates. The love scenes are gorgeous, while the deliciously described Florida setting reflects the warmth of Cagney’s and Evan’s connection. This 46 page novella provides a full narrative arc, with a conflict centered on the physical and psychological distance between the protagonists’ lives. Cagney’s wrenching parting from her beloved had me aching for her. However, this conflict is rapidly resolved in the last few pages and the happy ending assured. Indeed the obstacles dissolve, perhaps because they existed only in Cagney’s mind to start with.

Although it feels complete, this book was too short for my tastes. Ms. Diablo doesn’t have the word count to go into any depth. For instance, Evan is a veteran of the Afghan war, but we never really get to see how that (presumably horrific) experience affected him. We also know very little about the heroine, other than the fact that she’s a bit naïve and certainly more conservative than her rather wild Florida girlfriend. Truth or Daire offers a mere sketch of a relationship between two characters whom I’d like to know better.

Of course the answer to the implicit question in the book title was always Evan, but Daire reappears near the end, in a great scene that shows how far Cagney has come in a short time. I think Daire could have become more than just a brief comic relief. The same is true with Lily. It seems a shame to create such colorful characters but not take advantage of them.

In general, I have a personal preference for longer books. If, on the contrary, you’re looking for a quick romance hit, with lingering sweetness and luscious heat, Truth or Daire may be just the thing.

Thanks so much, Lisabet, for the insightful review! I've been writing a lot novellas and even short stories lately for the 'lunch crowd professionals.' They're very popular. I like your suggestion about exploring more about Evan and his time in Afghanistan. What makes him tic sort of thing. Guess I'll have to do a sequel.
Once again, thanks so much. I'm off to tweet about your review with a link to your lovely blog!
~Keta!

You're very welcome, Keta! Hope the book does well.

I"M with you, Lisabet. I like longer reads, with characters who change and grow. but then, I don't read on the run--maybe that's what the lunch crowd folks do? Maybe they read on their phones? I still have a flip phone, and don't go on-line with it at all...and the screen is MUCH too tiny to be able to read anything on it!

Also, way back in the day, the V-card was something I disposed of as soon as I found a volunteer willing to do it! Turns out I took his also, and we had a good laugh over it later. We were just fuck-buddies. No big deal. I don't understand the thinking that makes it such a huge deal. Do it so you can get on with the rest of your life.