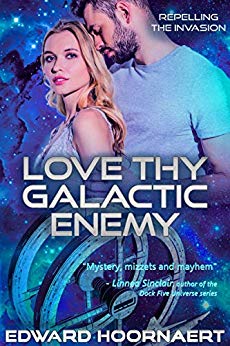 Araminta Streave is stuck behind enemy lines. Desperate, abandoned by her compatriots, fleeing battles, riots and a deliberately-engineered plague, she has managed to catch a refugee ship to Farflung Station, an interstellar outpost controlled by her planet’s sworn foes. She’s penniless and friendless, hungry and lonely, part of the hordes displaced by the war. With its ubiquitous surveillance cameras and capable security forces, though, Farflung is far from a safe haven for a woman who previously worked for a Proximanian spy. Minta’s only chance is to find some way off Farflung and back to Proxima, but so far her contact hasn’t shown up and both her resources and her hope are dwindling.

She rents a bed in a seedy flophouse, praying nobody will appear to take the other bunk in her tiny, dingy room. No such luck; the landlady shows up with a handsome but very ill young man. Finn is struggling to survive after exposure to the epidemic that her home planet manufactured. Motivated by guilt, sympathy, financial necessity, and perhaps a smidgen of lust, Minta agrees to nurse the invalid in return for free housing. When she discovers he’s actually the nephew of a high ranking Civ Space official, hence her mortal enemy, she doesn’t know what to do—especially since she’s starting to like the quirky, bookish Finn more and more every day.

Love Thy Galactic Enemy is the fourth book in Ed Hoornaert’s “Repelling the Invasion” series. I read, and greatly enjoyed, the first book, The Guardian Angel of Farflung Station. The other two are still on my TBR list. Still, I knew enough of the background to avoid severe confusion, and when Duke Dukelsky and his wife Sandrina from Guardian Angel showed up in this novel, I was delighted to see them again.

Mr. Hoornaert has a talent for creating lively, humorous scifi romance tales. Love Thy Galactic Enemy is, by turns, silly, suspenseful, surprising and sexy. Minta is clever and determined, though perhaps a bit blind to her own needs and desires. Finn is a delight, with his tendency to quote poetry, his secret powers, and his gentle but persistent pursuit of his lovely nurse. Duke and Sandrina, though secondary characters in this book, provide a pleasing balance to the main protagonists. Despite himself, Duke finds Minta attractive and Sandrina struggles against jealousy.

The real stars of this tale, though, are more otherworldly creatures: the mizzets, the whispet and the cyborg Watcher. Mizzets are adorable, affectionate, but rather unintelligent little animals who are basically irresistible. Although she’s living on the edge, Minta ends up adopting not one but two mizzets. The whispet, a member of a non-human sentient race, looks like a chubby teddy bear but has impressive telepathic and empathic capabilities. And Watcher — half-human, half-machine, assassin and agent for the vile Proximanian establishment — is one of the most memorable characters Mr. Hoornaert has ever created. I don’t want to spoil the fun by telling you any more, but in my opinion Love Thy Galactic Enemy is worth reading purely to meet Watcher.

The plot is fairly complicated, full of unexpected twists. For the most part, it holds together well. I did notice a few loose ends — for instance, I didn’t understand why Minta, a mere secretary, was the repository of sensitive war plans, and the descriptions of her repressed, religiously-dominated childhood seemed a bit irrelevant — but so much else was going on, I didn’t really stop to ponder these strands too much.

If you’ve read other books by Edward Hoornaert, then you’ll know what to expect from this one: strong heroines, heartfelt romance, lots of action (including some slapstick), slightly screwball comedy, and sex scenes that manage to convey arousal without being explicit.

If Love Thy Galactic Enemy is your first Edward Hoornaert book — well, you’re in for a treat.