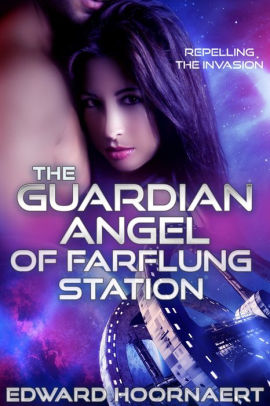 Farflung Station, in the outlying reaches of Civ Space near the lawless border planets, has seen better days. Piracy by the so-called Free Folk of these fringe worlds has shriveled trade, battered the economy and left the formerly prosperous outpost dingy, crumbling and sparsely populated. One of its two wheels has been shut down completely. In the other, half the lights are extinguished to save money, cracked windows never get repaired, corridors and ventilation ducts gather dust as their cleaning robots deteriorate, and the critical life support systems need constant maintenance.

Principal Officer Priam “Duke” Dukelsky has all the right characteristics for his job as chief of security for Farflung. He’s strong, brave, intuitive, skilled in both the martial arts and in human interactions. In fact, someone with his qualifications, not to mention his pedigree, should have a much more prestigious posting. Duke’s still in rebellion against his aristocratic, authoritarian parents, though. He likes Farflung just fine.

A good security officer notices things others miss. When Duke spies a dirty waif of a girl sneaking through the corridors of Farflung, he’s both suspicious and curious. He discovers that she’s the victim of a childhood attack by pirates. Orphaned, her tongue torn out, Sandrina was cast into space to die. Instead, she found her way to Farflung, where she has grown to womanhood. She scuttles through the air vents and lurks in the shadows, doing anonymous good deeds to adjust the karmic balance in the aftermath of the evil she has personally suffered.

Meanwhile, a senator from Civ Space is scheduled to visit Farflung, on the way to negotiations with the Free Folk, hopefully to re-open the trade routes. Senator Striden’s chief of security arrives ahead of time to survey Duke’s preparations, and turns out to be a fierce female warrior from the mountain tribes of Heartsrest, Princess Lakshmi Andrea de Bourbon Savoy Braganza – or Lockey, for short. Gorgeous and domineering, she decides she wants to bed the dashing Duke. That’s what Sandrina wants as well. This romantic triangle is interrupted by a vicious attack on the station, just as the Senator’s ship arrives. Despite their conflicting desires, Duke, Sandrina and Lockey must work together to save the Senator’s ship, the inhabitants of Farflung, and the future of the peace deal.

The Guardian Angel of Farflung Station is original, lively, funny, romantic, and profoundly entertaining. Ed Hoornaert deserves his nickname as Mr. Valentine, if only for his skill in creating distinctive, memorable female characters. Sandrina is wonderful – clever, feisty, deeply wounded but never a victim, a match for any man, including Duke, despite her diminutive size and inability to speak. Lockey’s character is less nuanced, but still impressive, especially when the author reveals her deepest desire and her greatest fear. I really enjoyed her colorful, stilted manner of speech. She sounds a bit like a Russian, which actually fits quite well with her personality.

Duke is courageous, skillful and sexy, the perfect hero. In fact, he’d probably be too perfect, if it were not for his interactions with the two females. He’s vulnerable to both of them, in different ways. The Heartsrest warrior princess manages to defeat him at martial arts, something no man has ever done. Sandrina’s influence is more subtle and profound. She touches something in him, healing some of the alienation that drove him to Farflung in the first place.

The book is full of colorful details about the society and environment in Farflung, including delightful space oaths. There’s lots of action, too, as the unlikely alliance of Sandrina, Duke and Lockey struggle against nearly impossible odds to defeat the pirates. The description of Sandrina’s “hidey hole”, where she guides the other two in order to escape from the pirates is, if you will pardon a pun, truly stellar. I don’t want to say more, so as not to reveal Sandrina’s secrets.

In short, this novella is great fun. If you enjoy space opera with strong female characters, I highly recommend this quick and satisfying read.

Thanks so much for highlighting Guardian Angel. You're the first person who's mentioned Lockey as a Russian -- and that's the voice I had in mind for her. I also enjoyed your 'karmic balance' phrase; that captures her intent perfectly.