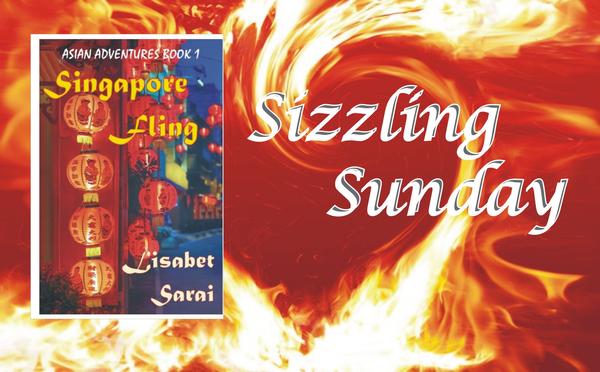 For today’s Sizzling Sunday, I’ve got an excerpt from Singapore Fling, the first volume in my Asian Adventures series.

They’d reached the center of the park, where the trees grew more densely. “This way,” said Jason, speaking for the first time since they’d started up the hill. He slipped through a gap in a wall of mature bamboo. Ploy was amazed to find herself in a grassy clearing. A concrete wall rose opposite them, completely covered by vines. A tiny waterfall trickled down through the vegetation in one corner, into a moss-lined culvert.

“This is my favorite spot,” he continued. “Tucked away next to the reservoir. Sometimes I come here by myself, to think.”

Jason cut her question short. He grabbed her shoulders, dragged her into an embrace, and glued his mouth to hers, forcing his tongue inside. The shock paralyzed her for an instant. Then her lust roared back, hotter than ever. Tilting her face up, she opened herself to his frenzied kiss, confused but more than ready to meet him halfway.

He clutched her to his chest, holding her tight, as if she’d keep him from drowning. She slid her palms down his back, all hard muscle under his business shirt, until she reached his ass. Gripping his butt cheeks, she pulled him closer. Because of his height, his swollen cock pressed against her belly, halfway between her navel and her pubis. That wasn’t going to work.

She dragged at his shirt, urging him downward. He broke the kiss and sank to his knees, taking her down with him, then rolled onto his back, with her on top. The bulge in his groin slotted into the gap between her thighs. He ground that lovely bulk against her clit. Even through her skirt and her underwear, the friction felt delicious.

“Oh, Jason,” she murmured, her cheek against his chest. His heart was going so fast she could hardly separate the beats. Meanwhile his hands scrabbled at her clothing, trying without success to tug it out of the way.

“Wait! Wait a minute!” Ploy sat up, opening her legs so she could straddle him, his hardness snug against her pussy. She gazed down at him. Behind his geeky glasses, his eyes were unfocused. He panted through parted lips. Already there were grass stains on his white shirt.

“Are you sure about this?” she asked.

With a vigorous nod, he reached up to unbutton her blouse.

She swatted his hand away. “Wait! What if someone comes along the path? What if we’re discovered?” She was pretty sure public sex was illegal in Singapore. Almost everything else was.

“I don’t care,” he answered, his voice breaking with emotion. “I want you, Ploy. I need you. I can’t hold back any longer.”