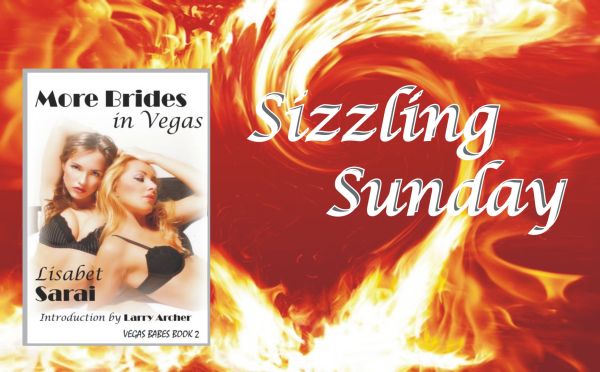 Tying the knot — with no strings attached!

Now Annie and Ted are getting married, and they’ve invited all their friends from that wild Amateur Night to the party. Taking over a vintage eighties motel with a courtyard and pool for their private function, the bride and groom expect a certain amount of carnal excess. Still, nobody’s prepared for the sexual free-for-all that breaks loose, involving not only the gals from the Den but also Annie’s rock star brother, Ted’s MILF mother, Chantal’s new slave girl, a lascivious hippie couple, a susceptible priest, the butch hotel manager, and an entire Scottish rugby team. As the wedding guests act out their secret fantasies, they push the limits of both lust and love. Finally arriving at the altar, after an exhausting, arousing twenty four hours, Annie and Ted realize that tying the knot doesn’t have to mean tying themselves down.

“I don’t think we should be in here, Mrs.—I mean, Claudia.” Jake looked around as his companion flicked on the light switch. Annie’s and Ted’s things were strewn around the bedroom. Clearly they’d left in a hurry.

“Teddie won’t mind.” The groom’s mother had already kicked off her gold high heels. She perched on the unmade bed, smiling at him in a predatory manner that made him a bit nervous, despite his aching hard-on. “I don’t have my own room yet, and I suspect you’d rather not go to yours…”

Jesus! What would Franny say if she found him with this creature? But his wife was busy satisfying her own extra-curricular desires. She could hardly object to him doing a bit of exploration.

“At least turn the light off. Anyone could see in those glass doors.”

“Actually, I thought I’d open them. Get a bit of fresh air.” Barefoot, she pranced over and slid the glass open. Her ass jiggled under her tight red dress. She did shut off the overhead light in favor of the less glaring bedside lamp. “There, is that better?” Without waiting for his answer, she pulled the dress over her head and tossed it onto the floor.

Jake just nodded, once more struck speechless by this brazen but beautiful woman. From the rippling bounce of her flesh under her clothing, he’d assumed she wore no underwear. In fact, she wore a bra and panties of black satin, though both garments seemed designed more to reveal than conceal.

The brassiere consisted of two triangles of gleaming fabric stretched under her breasts for support, plus a narrow ribbon over the top that connected to the straps. Her tits might as well have been completely bare. Her nipples lifted proudly from the pillowy mounds of creamy flesh, surrounded by crinkled, caramel-colored areolae.

The lower garment—calling it “panties” seemed a bit of an overstatement—was nothing more than waistband attached to a set of satin ribbons that outlined and highlighted her bare mons. Even in the dimness, Jake could see her fleshy, red pussy lips protruding from the crotch-less garment.

Jake couldn’t decide if the costume was sexy or ridiculous. His cock definitely concluded in favor of the former.

She stretched out on her side along the foot of the bed, one hand caressing her hip, the other supporting her chin. Jake had never seen so many curves. “Now you,” she said, licking her red-painted lips. “I want to see all of you, not just that sweet, hard cock I sucked in the hallway.”

Jake blushed. He’d never met a woman like this, a confident older woman who knew exactly what she wanted and who didn’t hesitate to ask for it. To demand it, in fact. He’d had a few girlfriends before he’d met Francesca, but in fact he’d been as much of a virgin as she that fateful night at The Fox’s Den when she first let him penetrate her lovely body.

“I—um—I’m not sure…” He trailed off, amazement replacing embarrassment as she slid two perfectly manicured fingers between her puffy cunt-lips and began to pump in and out.

“Don’t make me wait,” Claudia said, pausing to suck the juices off her fingers before reinserting them in her pussy. “Do I have to take care of myself? You look like a healthy young stud. Show me what you can do!”

Posted by Lisabet Sarai at 6:50 AM

"Do I have to take care of myself? You look like a healthy young stud." - Love it Lisabet, you have a real knack for words!

I've read every book in this series and they are all great. Stroke erotica at its best and there is a plot also.

Thanks, Larry! You're so encouraging...! And a role model, too. Loved your Crashing the Swinger's Pajama Party post.