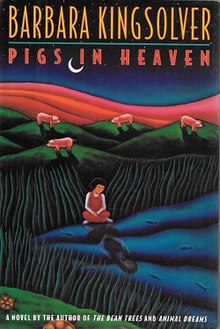 Taylor Greer never wanted children. In the small Kentucky town where she grew up, it took serious effort to get through high school without getting pregnant. Then, as she was driving west, fleeing the bleak prospects in her home town, fate dumped a three year old Indian girl in her lap, and she found herself embracing motherhood despite herself.

Three years later, she and Turtle have settled in Tucson, where she has a job, friends, a lover, and an altogether richer life than she ever expected. Then Turtle witnesses a freak accident, saves a man’s life and winds up on the Oprah Winfrey show. Her appearance attracts the attention of a lawyer for the Cherokee Nation, who sets out on a campaign to return the child to the tribe – even if that means tearing her away from her adoptive mother.

Pigs in Heaven, a sequel to The Bean Trees, is both deeply moving and hilariously funny. It would have been easy to make the female lawyer into a villain, but the author shows us that she has valid reasons for wanting to Turtle to grow up within the culture of her ancestors. Ms. Kingsolver treads delicately, exploring both sides of the question. The portrait she paints of Heaven, Oklahoma, doesn’t shy away from the grinding poverty or the desperation of its Native American inhabitants, but at the same time reveals a community deeply embedded in the natural world, where everyone is viewed as family.

The Bean Trees was told almost entirely from Taylor’s perspective. Pigs in Heaven has a much larger set of characters and voices. This is both a strength and a weakness; it adds complexity and interest, but undermines, to some extent, the structural unity of the novel. The book has a bit of a rambling quality at times. Still, things knit together in the end, in a satisfying if not totally surprising manner.

Barbara Kingsolver writes lovely, evocative prose that can literally bring tears to my eyes. I picked up this book and read the first chapter. I found it so astonishing, so gloriously observant, so subtle and emotionally true, that I immediately went back to read the entire chapter again.

Though it has some flaws, overall Pigs in Heaven is a gem.