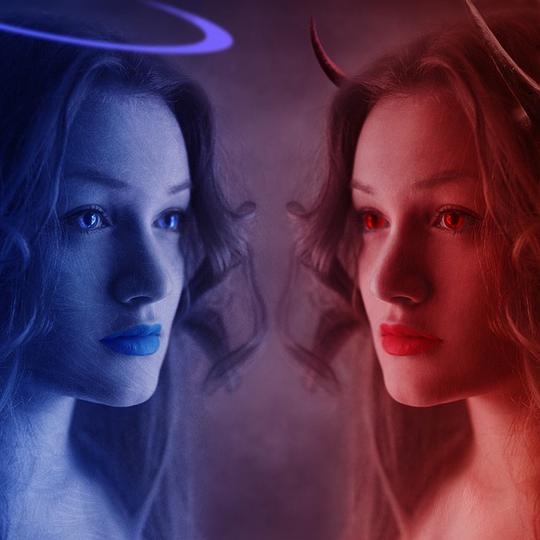 Image by Jonny Lindner from Pixabay


I used to be such a good girl. I don’t know what happened.

In the old days, I followed all the rules. I got straight As. I adhered to the high school dress code. I was an expert at figuring out what people wanted and giving it to them. In every area of my life, I aimed to please.

How did I get so contrary?

I guess I got bored. Bored with the same old plots and characters, the same tropes, conventions and clichés. Overwhelmed by ennui when I looked at the best seller lists. The longer I spent in the world of publishing, the more frustrated - even disgusted - I became by the tyranny of genre and the overwhelming influence of whatever is Currently Hot.

Over the past two decades (has it really been that long?), I have become progressively less interested in pleasing the masses. Instead, I seem to have cultivated my own personal imp of the perverse.

In the first vampire story I wrote for publication, my hero is a blond, blue-eyed, Midwestern frat boy who doesn’t have Goth bone in his undead body. Unlike Lestat, Edward Cullen or the many recent incarnations of Dracula, he’s not in the least ancient or world-weary – he became a vampire just five years before the tale begins.

My paranormal romance The Eyes of Bast turns the traditional “shifter” paradigm on its head. The male protagonist was actually born a cat. A sorceress gave him human form in order to have a vehicle for satisfying her lusts. And if the heroine succeeds in freeing him from the witch’s curse, will he revert to his original feline nature? This is not a typical concern in a shape-shifter tale.

Of course, dominant billionaires and submissive virgins are all the rage. So I’ve got a novel entitled The Gazillionaire and the Virgin in which the heroine’s the one who’s richer than Croesus, and the hero is a brilliant nerd with deep theoretical knowledge about sex but no actual experience. Then there’s my other billionaire themed tale, my historical novella Challenge to Him, about a filthy rich Gilded Age industrialist and an intellectual labor activist. Not exactly typical.

I can’t blame anyone but myself. I’m just too contrary to write what sells.

When I see a call for submissions that seems worth my consideration, my first thought is “how can I twist this into something different?” This isn’t always the route to getting my work accepted. For example, one editor just couldn’t see the Hindu goddess Parvati as a succubus, despite her consuming the sexual energy of the aspiring ascetic hero. I thought it was a great, original take on the theme, but hey, that’s just me.

One trope that’s been bugging me lately is the Natural Submissive. I’m sure you’ve encountered her. Despite never having had any prior experience with D/s, she surrenders immediately and completely to the charismatic Dominant. Without training, she kneels with perfect grace and wears her bonds without complaint. Oh, and she’s got incredible pain tolerance, too, just what the nasty Dom likes. I can’t tell you how many stories I’ve read recently where the dominant canes the sub in the very first scene, despite the fact that caning is quite an extreme form of discipline.

Now, I’m somewhat guilty of this cliché myself, especially in my earlier work. “You were born for this,” my slightly cheesy dominant Gregory tells Kate in my first novel, Raw Silk. It’s thrilling to believe that your Master can see through your everyday facade to the kinkiness at your core. To be known – accepted – valued because of one’s dirty desires – that’s intoxicating.

My subs are always conflicted, though, unlike the classic Natural Submissive. They’re shocked by their own behavior. Furthermore, they’re not ready all at once for the worst the Dom can throw at them (and of course the Dom knows this).

So now I’m toying with the notion of writing a story where submission most emphatically does not come naturally. I’m thinking about a female character who really does want to be a competent slave, but who keeps making mistakes – due not to lack of motivation but lack of aptitude and training. Maybe she has joint problems, so she can’t stand being on her knees or suspended from the ceiling. Or perhaps she’s just a natural klutz. Her poor Dom is actually embarrassed to take her to his favorite kink club. He loves her, though, and appreciates her sincerity, so he can’t bear to send her away.

Yeah, I know. Sounds like another best seller, right?

Ah well. At this point, I don’t have to prove anything to anyone. I’ve reached official curmudgeon age, hence I have license to gripe with impunity about “the industry”. And as long as I’m writing – and enjoying the process – I’ll continue to seek originality over marketability. That’s just the way I am.