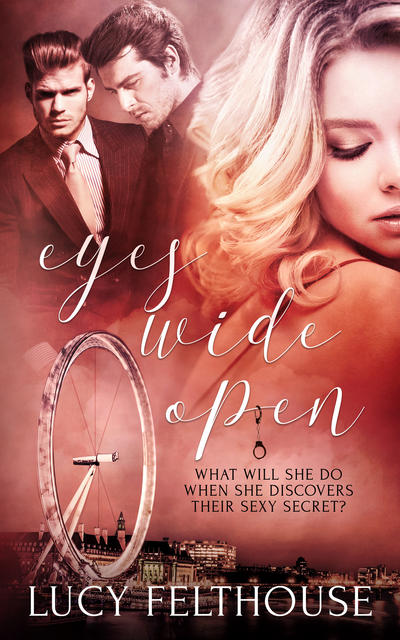 Recent graduate Fiona Gillespie is stuck working in a grimy pub in London’s East End, and living in a horrid flat. It’s only while she figures out what she wants to do career-wise, but that’s easier said than done.

When she sees an advertisement for a job at a plush Mayfair hotel, she jumps at the chance. Determination and a spot of luck land Fiona her dream role—and it comes with accommodation included.

Her job and living situation sorted, things are on the up. Unfortunately, her personal life is lacklustre. It doesn’t bother her, though—not until she meets businessmen James and Logan, and her head is well and truly turned.

When a misunderstanding leads Fiona to James and Logan’s sumptuous top-floor hotel suite, she has no idea what she’s about to uncover. Her imagination runs wild, but not wild enough to get to the truth—James and Logan are a couple, and they’re into some seriously intriguing activities.

Fascinated, she launches herself into a whole new world with the two men. But is this just physical, or is their arrangement set to become something more?

Continuing to surreptitiously peer at the men over the rim of her glass, it hit her that this was the first time in months she’d looked at a man with interest, much less two men—and at the same time! She was ready to snatch her gaze away if one of them happened to glance at her, but it wasn’t surprising the pair had attracted her attention.

The tailored business suits would draw the eye even on someone unremarkable. But on these two, the fine clothing was practically an orgasm for the gaze. They sat opposite each other, and their angle to her meant she had a view of both their profiles—lucky her.

The one to her right had very dark, almost black hair, with a bit of a curl to it, a long straight nose, a trimmed goatee and, if she wasn’t mistaken, deep blue eyes. It was hard to tell for sure from this distance and perspective.

The one on her left had lighter, shorter hair, stubble that by some magical feat still looked smart, and the most sinful lips she’d ever set eyes on. And speaking of eyes, she thought perhaps his were green. What she wouldn’t give to go and check both of them out close up, preferably naked.

Shocked at her own sudden lustful thoughts, she inhaled more than drank another sip of the juice. Unfortunately, it hit her throat all wrong and she almost slammed the glass down as she started to cough. She tried so hard to suppress the cough, eager not to draw attention to herself, that she made it worse. Snatching up the thick linen serviette from the table, she held it to her mouth as she spluttered in a most embarrassing manner, and tears began to roll down her cheeks. By now, she was sure the whole damn restaurant was staring at her, and she wished the tablecloths reached the floor, like the ones in the restaurant upstairs, so she could hide under the table until she regained her composure.

Swallowing repeatedly to try to soothe her irritated throat, she gasped as a gentle hand laid on her shoulder, which set her off all over again.

“Oh God,” came a voice. “I’m so sorry. I didn’t mean to make you jump. I just wanted to make sure you were all right. See if I could help.”

Unable to speak, Fiona waved a hand to try to signal that she’d be okay, but unless the guy was a mind reader, he’d have no luck figuring that out. Blinking through the tears that marred her vision, her urge to hide underneath the table grew stronger. Christ, it was only the hottie with the blue eyes. And, if she wasn’t mistaken, his sexy friend with the green eyes was also hovering close by, concern etched into his handsome features.

Managing to drag in a breath, she huffed out, “Thank you.”

Just then, Jeremy arrived with a carafe of water, complete with ice, and poured her a glassful. “Here you go, Fiona. Drink this. Are you all right? Anything else I can get you?”

She picked up the glass and took a tiny sip of the freezing cold liquid, hoping it wouldn’t make her cough again. She seemed to have got a handle on it, though her now-sore throat wasn’t at all happy with her. After taking several more tiny sips, she let out a sigh of relief—it seemed her mortifying coughing bout was over. Then she moved on to bigger gulps, buying herself some time to think of something witty to say, anything to convince the three men looking at her that she wasn’t some kind of imbecile who couldn’t even manage a glass of juice without choking.

Unfortunately, her creative brain, which had been on fire up until she’d started lusting over the hotties, had taken its leave. So she decided to opt for the truth. “I’m so sorry. I didn’t mean to disturb you. My juice just went down the wrong way, that’s all. I’m fine, really. I’ll just finish my drink and be on my way. Thank you for the water, Jeremy.” She aimed a weak smile in his direction.

Blue Eyes turned to Jeremy. “Yeah, thanks, buddy. If you need to get on, we’ll keep an eye on her for a bit, make sure she’s okay. Don’t worry.”

A little warily, Jeremy looked at the two men, then at Fiona. “Are you going to be all right, Fiona? Do you need me to call someone and let them know you’ll be late or anything?”

She shook her head. “Honestly, Jeremy, I’ll be fine. It was just a coughing fit, that’s all. No lasting damage, except maybe to my makeup. And no, nobody will be missing me yet. It’s fine. Thank you so much, though.”

“Just give me a wave if you need me,” he said, backing away.

With that, he morphed from concerned acquaintance into efficient waiter in an instant and went back to looking after his tables and the patrons frequenting them.

Knowing she’d now have to address the two men who’d caused her blush-worthy incident in the first place, she took yet another huge gulp of the icy water, then dabbed at her face with the serviette. Putting it down, she turned to Blue Eyes, who still stood by her side, but had removed his hand from her shoulder, with a wide smile.

“I’m so sorry,” she said again. “Please excuse the state of me, I’m sure I must look terrible. Thank you so much, both of you, for coming to check on me, but I’m really fine. No Heimlich manoeuvre required. I’ll just finish my drink… drinks… and be on my way. Please feel free to go back to your meeting.”

Green Eyes stepped a little closer. “You look just fine, sweetheart, except for being a little flushed, but that’s no bad thing.” He shot an almost imperceptible glance at Blue Eyes, and Fiona had to wonder if she’d imagined it. And if not, what on earth did he mean by that, anyway?

“Yes,” his friend chipped in, moving around so that he, too, could look at her face. “You look great. We’ll be just over there if you need us, all right? Don’t you hesitate to call out or wave, okay?”

Fiona wished they’d stop making such a fuss. But they were just being polite, she supposed. So, fixing the smile back on her face, she said, “Thank you. And I will. I promise.”

She waited until they’d retaken their seats before she started to make preparations for leaving hers. She didn’t want to dash off straight away as that might concern them further and send Jeremy into a tizzy, so she acted as coolly and calmly as possible, finishing the water, then the juice, as she continued making notes on her tablet. Finally, feeling able to leave without raising any eyebrows, she got up and collected her things.

Her movement attracted the attention of Blue Eyes and Green Eyes, and she gave them both a smile and a nod before moving off. She didn’t see Jeremy, who must have been in the kitchen collecting something, so she made a mental note to thank him when she next saw him. That was the downside to posh material serviettes and electronic devices—it meant there was no paper or pen handy to scrawl him a little note with.

She wasn’t quite ready to head back to the PR & Marketing Suite yet, at least not until she’d fixed her no doubt ruined makeup—which would raise a few eyebrows and spawn some questions—so she decided she’d dash up to her room for a few minutes and sort herself out.

After pressing the button for the elevator, she swiped through some of the photos she’d taken on the tablet as she waited for it to arrive. A couple of minutes later, the car arrived with a ping and a swish of doors. She stepped in, pressed the number for her floor and moved back. Just as the doors began closing, she realised the table the two men had been sitting at was visible from her position.

They were still there, and she was glad no one could see or hear her reaction as she looked at them, only to find two pairs of very arresting eyes looking right back at her—with interest.

And, as her view of them grew narrower and narrower until only a sliver was left, Blue Eyes flashed her a positively wicked grin just before he disappeared altogether.

Clinging onto the brass handrail behind her to steady herself, Fiona willed herself to get a grip. She’d been having a really good day, right up until those two had somehow awakened her hormones and made her bloody fruit juice go down wrong. And the way they’d clearly been watching her… and that smile! Shaking her head, she wanted desperately to believe they were some kind of dodgy perverts who frequented hotel restaurants to prey on lone young women, but common sense and cold, hard facts told her that wasn’t the case.

For one, what had they done? Offered help, and concern. That was all. What had they gained? Nothing, except maybe peace of mind in knowing she was okay. Her tablet and phone were still in her possession, so they weren’t thieves. Dodgy folk didn’t spend time in The Portmannow Hotel. It just didn’t happen.

So if they weren’t dodgy perverts and were just two relatively young businessmen, why had they been watching her like that? Their expressions, the looks in their eyes, indicated something altogether different from innocent concern for her wellbeing. The smile Blue Eyes had thrown her had been nothing short of sinful. Lustful, even. One Lucifer himself would have been proud of.

God, was it possible that they… found her attractive? 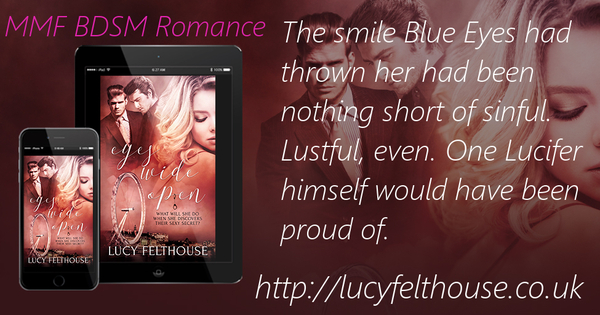 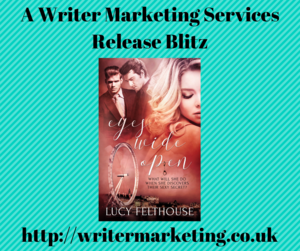 Posted by Lisabet Sarai at 9:22 AM