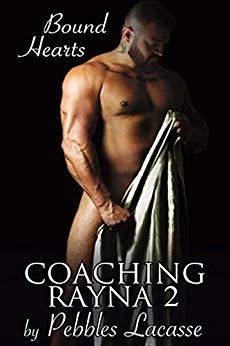 Single mother Rayna is ten years older than her lover Coach. She’s working hard to raise her two teens as well as to move from being a mere dental hygienist to having her own practice. Fitting the dominant gym owner into her life isn’t easy, despite the bonds of both lust and love that draw them together.

Coach has had a lot of sex partners, but he has never loved a woman before Rayna. He adores her, and will do anything to keep her safe and happy. Intelligent and intuitive, he understands the importance of honesty in a serious relationship. Still, he hasn’t let her see the full ferocity of his sadistic desires, the alter-ego he calls Demon. Though Rayna enjoys submitting to him and seems to find their rough sex games supremely satisfying, he’s worried that he’ll scare her away, or lose control to the point that he actually hurts her.

I also enjoyed the bisexual nature of the later encounters. Many romance authors shy away from portraying FF intimacy, because there’s a segment of the readership who find this “icky”. (This is a quote from one survey I did myself.) There’s no hint of same-sex interest in the first Coach book; I was delighted to find Ms. Lacasse expanding her horizons (and those of her characters) this way.

Like its predecessor, Bound Hearts suffers from some editing issues: grammar errors, particularly in the use of pronouns, and the occasional incorrect word choice (e.g. “reign” instead of “rein”). I found this a bit distracting, but the mistakes were not frequent enough to spoil my enjoyment.