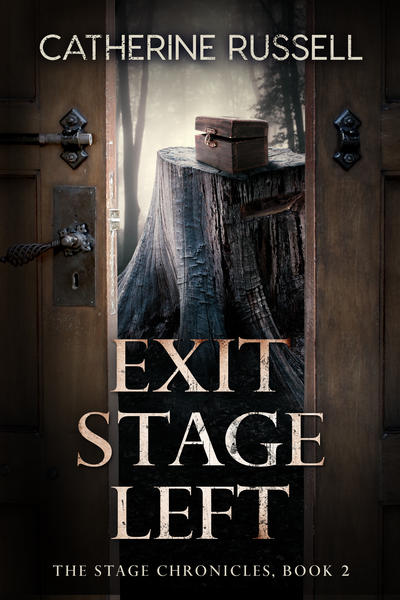 Today I’m delighted to welcome Catherine Russell, author of the dark fantasy romance Exit Stage Left, to Beyond Romance. Be sure to enter her fabulous giveaway, at the end of this post.

Lisabet: What is something you’ve lied about?

Catherine: It took many years for us to get pregnant. In 1994 I was given an early diagnosis of cervical cancer. We were told that we’d be extremely lucky should I ever get pregnant due to the multiple procedures I had, and if I did, it would be a miracle that I could carry to a full term. Well…long story short…I got pregnant many years later as we had planned it that way and we were very blessed it took only one try. My wife and I had planned it very carefully and didn’t tell a soul. Once we finally announced the great news to the world, we settled in for all the expected things to happen. Such as baby showers, getting a nursery ready, and food cravings. Well we did the first 2….the last one, I never had…at all. As I drew closer to my due date and knew that I hadn’t had this one crucially normal thing happen, I knew my wife felt a bit left out, that she couldn’t do this one “spousally” privileged rite of passage…so I made up a few cravings, so that she could run out in the late evening or early morning to fulfill her wishes…totally unbeknownst to her. I fibbed to make her feel included and better about her part of the whole wonderful experience of our pregnancy. I did eventually tell her, many years later only to be told…”I thought so, your cravings were too predictable.” We both had a good laugh.

L: Who is the last person you hugged?

C: That’s too easy. My son, who is now over 6ft tall, towering over me. He’s about to leave on his first internship out of state for an entire month. So we’ve spent a great deal of time together as of late.

L: What are you reading now?

C: I’m quite proud to answer this one. It’s the first non-fiction book that I’ve ever read. And for me, along with many other women and men across the nation, Nov. 8th 2016 was a tragedy, a door opening to the slow and painful torture of watching and experiencing just what a narcissistic, racist, idiotic, and egomaniacal man that currently resides in the White House truly is. “What Happened” by Hillary Rodham Clinton.

L: How do you come up with the titles to your books?

C: With The Stage Chronicles, I knew there’d be at least 1 yet no more than 4, so I mulled around with just The Stage to start with and then it struck me, each sequential book is like another step, that when you’re on stage you can only go in certain directions. With the new storyline that has since erupted in my brain, I was doodling with the main characters names one day, creating initials and intertwining them and came up with A/V, (Anna/Viktor) and I thought the 2 single letters looked striking…and voilà, came up with it.

C: When I began to create The Stage Chronicles, I saw it my mind’s eye as a movie scene, playing out scene by scene. The fiery red headed Kate Mara is my Megan O’Day with her best friend Ashleigh being portrayed by Bollywood actress Aishwarya Rai and last but not least Geoffrey Drake would be embodied by Andrew Hozier Byrne, the lead singer of Hozier! The other characters I’m still fleshing out as far as their human counterparts.

L: Thanks for sharing a bit about yourself and the book. I hope the tour goes really well.

Megan O'Day seems to be navigating the unpredictable relationship with Geoffrey Drake, her centuries-old vampire guardian angel, rather well. But then his past suddenly rips him from her, forcing her to face the unknown future alone in the gripping sequel to The Stage.

Still bound to Geoffrey through the power of the Link despite his unexplained absence, Megan's mind is flooded with his haunted memories. While she relives the darkest moments of his previous life, she discovers his attachment to a woman who bears a striking resemblance to her.

As she questions Geoffrey's love for her, she strikes up a dangerous alliance with Geoffrey's brother, Alexander, who is also a vampire. She hopes that he will help her find a way to rescue Geoffrey: instead, he seems to be awakening new emotions and desires within her.

As the past and present collide, Megan struggles to fend off Alexander's dark seduction. Is Geoffrey truly beyond the reach of her love forever? If not, what must be sacrificed to bring them back together again?

I began to hear a sound as they were speaking; a small child’s voice, whispering to me. Her high pitched voice, singing a lullaby and I recognized the notes. It was Greensleeves, the same one my mother had sang to me when I was a child. Without thinking, I walked forward, ignoring them as they reached out for me.

“Megan, stop!” I heard them say yet I went in. Suddenly the room was full of sunlight. It was a child’s nursery, with light blue walls and soft white curtains at the lovely double sided windows that opened on to a huge oak tree, whose branches reached out to the window’s ledge. A small robin sat on the limb, singing. I turned to see toys and stuffed animals around the wooden floor that was covered with a multicolored throw rug. Shelf after shelf of books and nick knacks were all around the walls. Then I saw her in the corner, slowly moving back and forth in the rocking chair, holding a doll, gently stroking its hair. She looked up and I saw eyes, one green and one blue. Her light brown hair was tied up with a yellow ribbon, and she wore a pale blue dress with lace and bows. Her legs had the familiar white tights that I remembered as well as black Mary Jane’s on her little feet.

“Hello there,” she said, smiling sweetly.

“Hello. Who are you?” I asked walking toward her, still looking around, totally amazed at what I was seeing, experiencing.

“Well, I’m you of course,” she said, coyly. She jumped up and reached out for my hand. She looked at the cute little tea set on the table next to her.

“Will you join me for some tea with my dolly?” she asked in her little voice, so sweet and innocent. There was something I was supposed to be doing, but what was it? I couldn’t remember. Wasn’t there someone with me, right before I saw her? No, I must’ve of imagined that. Where else would I want to be besides here?

“Yes, I’d love to. Would you like me to pour?” I said, sitting down and crossing me legs as she sat in the little chair beside me. 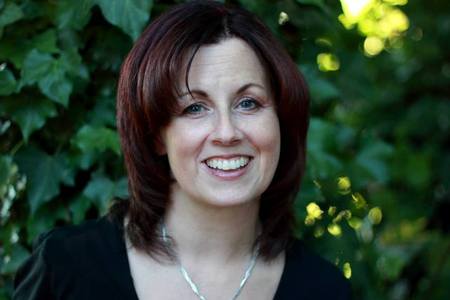 Catherine Russell was born in Tacoma, Washington and raised in a small town just south, South Hill, Puyallup. At the time South Hill was a heavily wooded area and far off the beaten path. Growing up she had the forests as her fantasy world along with the wild animals. She lived with her parents and an older sister. There are a few similarities from her own childhood that have carried over in to her first novel, “The Stage”. As a child, she did have a small dog named Toto, whom she would quite frequently roam the woods with. Her childhood home still stands, and is still nestled in the woods even though South Hill has undergone an extreme makeover since she lived there. She enjoyed hours of day dreaming and playing in the woods, which in turn fed her fantasy world of make believe.

Amazon link for The Stage Chronicles Book 1 The Stage https://www.amazon.com/Exit-Stage-Left-Chronicles/dp/1935460889/ref=sr_1_2

Catherine is giving away a $50 Amazon or BN gift certificate during her tour. Use the Rafflecopter below to enter.

Thank you for guesting at my blog, Catherine, and sharing something about yourself. I hope the tour does really well!

1st off, thank you Beyond Romance Blog for this excellent opportunity, I truly appreciate it. Next a huge thank you shout out to Goddess Fish Promotions & of course my wonderful publisher, Barking Rain Press, for this experience. I could have done it with you all!

Good morning James! It's great to see you and thank you for your kind words and wonderful support. Good luck in the drawing!

Good morning Victoria! And you're most welcome. Thank you very much for dropping in. Good luck in the drawing.

Which bookm would you like to see a sequel to? Congrats on the release. Bernie Wallace BWallace1980(at)hotmail(d0t)com

Hi Bernie, lovely to see you here. Actually there are 2...ironically enough 1 of them is getting a sequel at Christmas. Anne Rice has the new Blood Communion arriving in book stores even now. Then the 2nd is one that will never see the light of day as the author has clearly stated so. "Midnight Sun" by Stephenie Meyer would be the one a lot of folks, myself included, would love to see the fresh ink, however Ms. Meyer has clearly stated that due to the unauthorized release of a rough draft of Edward Cullen's POV of Twilight it will never become real, though I'm sure it would have been a lovely read for all to enjoy. Thanks Bernie!

Your book sounds great...and I may need to check out Hillary's book too. :-)

Good morning Barbra, great to have you here. Thank you for your kind words and Yes I totally encourage you to enjoy Hillary's book. I normally read fiction as to escape the reality of our world however...I felt it was utterly important to educate myself. Thank you for dropping in and good luck in the drawing!