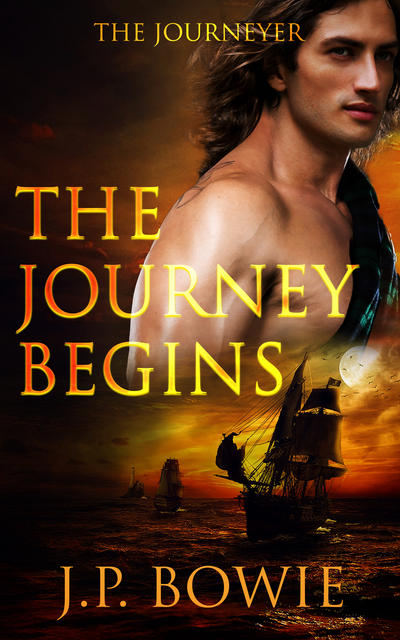 Jamie MacDonald, a young Scot mourning the deaths of his father and brothers in the ill-fated battle of Culloden, decides to take his mother to the New World. But tragedy and unforeseen circumstance dog Jamie’s journey and he is pressed into service aboard a pirate ship commanded by a ruthless Spaniard.

Antonio Rodriguez is a man with a dark past, but also with an allure Jamie cannot resist.

The two men embark on a stormy relationship—but can their feelings for each other survive the danger that surrounds them, threatening not only their love, but their very lives?

Rodriguez’s dark eyes flashed as he walked slowly toward Jamie. “You are a deal too arrogant, my friend.”

“Friend? Is this how you treat your friends? ‘Thank you for your bravery, Jamie, now it’s to the brig with you where you’ll rot till I have appeased my Spanish pride!’”

For a moment he expected Rodriguez to shout for Hugo to drag him back below, but instead he stared at Jamie, his face a mask, unable to be read. Then he said, “You are a brave man. A man I would like to have by my side and call my friend. Can I call you my friend, Jamie?”

Jamie searched Rodriguez’s eyes trying to see if he could discern the slightest trace of mockery there. He could not, nor could he break away from the steadfast gaze the man returned.

“Aye,” he was at last able to say, his own voice sounding strange to his ears. “Thatyou can.”

Rodriguez grasped Jamie’s arm. “Come then,” he said. “I have some fine Jamaican rum for a toast.”

“To our friendship, what else? A toast to show you how much I value this moment.” Rodriguez poured the rum into two small glasses, then held them up to the light. “Venetian glass,” he said, his voice low and sensuous. “Only the finest will do for you, my brave Scotsman.”

Jamie felt his cheeks redden at the effect the silky compliment had on him. His hand trembled slightly as he raised the glass to his lips. He was intensely aware of the other man’s unwavering gaze that remained locked on Jamie as they lowered their glasses.

“I envy where that glass has been, Jamie.”

Rodriguez took a step closer, then with a great tenderness, he brushed Jamie’s lips with his own. Jamie gasped, his body jolted by sensation. He reached out and grabbed the man’s arm, at first to thrust him away, then as the kiss deepened, found himself holding onto that arm, pulling Rodriguez into a tight embrace. Never in his life had Jamie experienced a sensation that seared him with pleasure like the feel of Rodriguez’s soft yet demanding lips on his. His cock flared to life as the Spaniard’s tongue slipped inside his mouth, and all Jamie wanted to do was respond in kind.

“Wait!” Jamie jerked backward, finding his voice, hoarse though it was. “Stop… this is wrong. I canna’ do this, Captain. We are two men. This isna’ right.”

The Spaniard still held him, and loathe as he was to admit it, Jamie did not want to break free—but break free he must! With a rough movement, he pushed the other man away.

“No, I won’t give in to this.” He wiped his mouth with the back of his hand and glared at Rodriguez.

The Captain’s sardonic smile tried to hide the hurt expression his eyes could not. “I am sorry, Jamie. I took advantage of you, and for that I apologize. Please forgive me. It will not happen again.”

Jamie stared long and hard at the man, trying to understand what he was feeling at this moment. His mind was a turmoil of emotion. He liked this man! There was something about him that inspired him, thrilled him. There was no ignoring the way his cock had reacted so damned quickly… And yet, was this not a sign of weakness among men? He had no experience of these things, only what he’d heard in church of a Sunday when he was a child, and didn’t fully understand. Jamie was not a big believer in the Bible or its teachings. He had no fear of God in his far off remote heaven, uncaring for the suffering of the people he was supposed to have created.

Antonio Rodriguez was not a weak man. He was brave—reckless maybe, but brave—and a respected captain. He was handsome, intelligent and would be, Jamie instinctively felt, a loyal friend. But he should not give in to the urges that now coursed through his body.

“I am sorry, Captain. I canna’ give what it is you want from me.”

“I understand, Jamie.” Rodriguez’s gaze slipped away from Jamie’s face. “I will not trouble you again. You may go.”

Jamie turned and left the cabin, closing the door quietly behind him. He breathed a deep sigh, not of relief, for that he did not feel. What he did feel was a strange sense of loss. He walked to the ship’s side, and gripped the rail until his knuckles turned white, while below him the waves churned and slapped against the side of the ship.

Damnation. These feelings the captain had invoked in him were not so easily shaken off. He could not deny the man’s attraction, or the sense of excitement he felt in his presence. Could he go where Rodriguez wanted to take him? Could he put aside his dislike of what that meant? No, not dislike—fear, perhaps. Aye, that was it. He was afraid—afraid of what he now felt. Afraid of the sensations Rodriguez’s lips had kindled in his body. Even now the memory of those soft, lush lips on his own eager mouth brought a rush of blood to his groin. He groaned with frustration and stared for a long time at the door to the captain’s cabin. Did he dare? Could he go back and face the man and tell him he’d been a fool to reject him? Could he?

He took one uncertain step toward the cabin, and then stopped. Above him the sails, sharply etched against the darkening blue of the sky, billowed and flapped in the wind. He clenched his fists and took a deep breath to steady his resolve, then he knocked on the cabin door. His nerve almost failed him when he heard the command to enter. Swallowing hard, he pushed the door open and stepped inside.

J.P. Bowie was born in Aberdeen Scotland but has lived most of his life in London and ultimately in the US – Nevada and California to be exact. After giving up a life in show biz both on the board and backstage he began writing gay mysteries and romance in 2000. In 2008 he wrote his first vampire novel, My Vampire and I which started out as a short story and ended up being an eight part series. Many more vampire and detective stories followed. He wrote The Journeyer some years ago and is delighted that Pride Publishing are reissuing it as a three part serial. The Journey Begins is Part One and is currently available. The New World and The Fight for Freedom will be released shortly.

My sincere thanks to Lisabet Sarai for taking the time to promote The Journeyer – The Journey Begins on her blog.

Posted by Lisabet Sarai at 8:59 AM