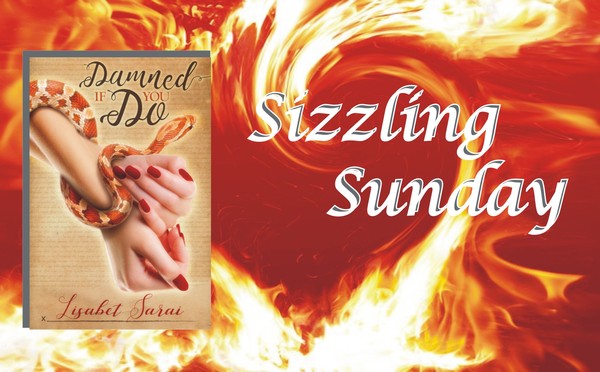 For Sizzling Sunday today, I have a never-before shared paranormal excerpt from Damned If You Do.

And I’m giving away a copy of the book to one lucky reader. Just leave me a comment to enter.

But if you don’t win...the book is only 99 cents until the end of the month, as part of my Month of Magic! 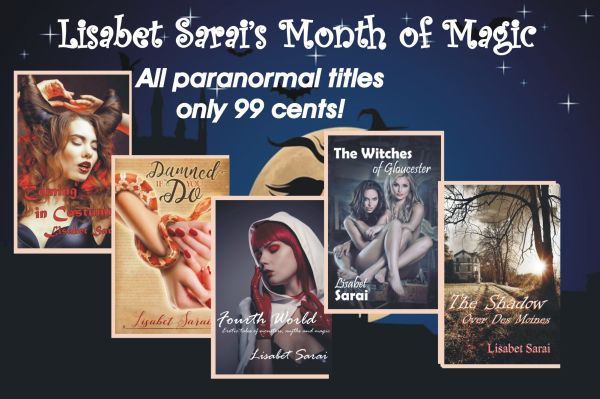 Shadows filled the bedroom. Mister B had closed the drapes against the bright June sun, and odd as it seemed, the temperature had dropped enough to raise goose bumps on her naked arms. He'd also removed all her belongings from the top of her bureau, on the opposite wall, and spread a cover of black satin over the surface. A crimson candle burned there now, flanked by a black ostrich feather, a silver bowl, and a vicious looking knife with a serrated silver blade. Next to the blade lay a multi-page document, which Wendy recognized as the contract her companion had shown her yesterday.

Mister B stood beside the chest of drawers, wearing a hooded robe of black, embroidered in gold with mystic signs. His trim form practically vibrated with tension. “Come here,” he ordered. “Time is short. We should have done this last night.”

“Let me put something on,” Wendy replied with a shiver.

“No! You must be naked.” Picking up the knife, he reached for her. “Give me your hand. There’s a twelve hour tolerance on the contract date. You must sign before the clock strikes noon.”

“Wait just one minute!” Dodging his blade, she snatched the papers from the dresser. “I haven't read the full contract yet.”

“Bloody hell, woman! Let's get on with it. I've summarized the terms for you—the rest is just legalese.”

He appeared agitated. Wendy's doubts resurfaced. He'd seemed totally normal last night—normal for a sadist, at least— but what if he really was wacko? She didn't like the look of that blade one bit.

“I'm sorry, but there's no way I'm going to sign a contract without reading it thoroughly. If you have a problem with that, you can leave now.”

“No, no–—read the whole damned thing if you insist–—just be quick about it.” He replaced the knife on the table and commenced pacing back and forth in front of the bed.

Wendy seated herself on the edge of the bed and proceeded to review the document as carefully as she could, given the chills that racked her body.

In fact the contract was simple, specific, and far more clearly written than many she'd been offered over her years in the business. Subterranean Services Ltd. promised her annual sales of at least five million copies and annual pre-tax income of at least $500,000, these levels to be achieved within one year of signing and to be maintained for at least ten years. In return, she promised to surrender her Immortal Soul—she noted the capitals with some amusement—upon demand, but in any case no later than two years from the date of signing. She also agreed to obey the Representative of the Provider “in all matters, including sexual” until the transfer of her soul was completed. There was the typical boilerplate about indemnification, jurisdiction, arbitration (“by an Authority to be chosen by the Provider”) and notice. However, there were no provisions for termination.

She'd included slave contracts in a couple of her novels. There was always a termination clause. Of course, it might be that the transfer of one's soul was irreversible. In any case, she wasn't going to sign without engaging in some negotiation.

“This seems reasonable, assuming I believe you can deliver. Which of course isn't a reasonable belief at all.”

“You can count on me, Gwen.” His mellifluous voice dripped with honey, though she still read impatience in his stance. “Did I not prove that to you last night?”

“Last night was an impressive demonstration. As was yesterday afternoon. Still, I suspect that my soul must be worth a good deal more than five million dollars, the aggregate value of this contract.”

“The minimum value, my dear. With your talent, and my support, there's no practical limit—”

“Even so, I'd like to add some wording about termination.” She crossed her arms over her bare breasts, and forced herself to meet his eyes.

“Impossible!” The venom in his exclamation startled her. “Our contracts are irrevocable, by their very nature.”

“Look at it from my perspective, Sir. I'm giving up my free will, in addition to my so-called immortal soul. I have significantly more at stake than you. If you should prove untrustworthy...”

“You can trust me, Gwen.” His oily persuasiveness had returned. “I swear by the Horns and the Hooves that I'll fulfill your heart's desire. Your body's as well.”

“An escape clause, then. Time limited, if you want.” She handed him back the contract. “Otherwise, I'm afraid I can't sign.”

“Damn you, woman! You drive a hard bargain.” His fists clenched then relaxed. “Very well.” He waved a palm over the document, then passed it to her again. “Will this satisfy you?”

New text had appeared on the last page. Wendy read it, her heart racing at this new demonstration of her companion's powers.

“Until midnight on October 31, 2017, this agreement shall be treated as provisional. Before that date and time, either of the Parties may dissolve the contract by stating three times in the presence of the other, ‘I renounce you’. Upon termination, any benefits conferred will be revoked. If neither of the Parties exercises this option before the specified date, the agreement shall endure in perpetuity.” She peered up at the robed figure looming over her. “Four months. I guess that should be enough time to decide.”

“Four months to choose between fame and obscurity, wealth and poverty.” He took both her hands, raised her from the bed, and drew her toward the chest of drawers. His fevered touch dispelled her chills. Her nipples swelled and her clit pulsed. He cupped her breasts for a moment, then slid his hands over her hips to capture her ass and pull her body against his. Under the loose robe, his erection raged. “Four months,” he murmured, licking along her throat with his searing tongue, “to choose pleasure over loneliness.”

Don't forget to leave me a comment as an entry to my drawing!

Posted by Lisabet Sarai at 7:19 AM

Email ThisBlogThis!Share to TwitterShare to FacebookShare to Pinterest
Labels: 99 cents, Damned If You Do, demons, giveaway, Month of Magic, selling your soul, Sizzling Sunday

Wow thank you for the Chance. lstnrome06@gmail.com

Thanks to all of you for visiting.