BREAKDOWN is a unique and groundbreaking four-book suspense series that will keep you turning pages until the killer is finally exposed.

In this explosive new miniseries, the idyllic community of Shutter Lake, nestled in the peaceful Sierra Nevada Mountains, is rocked by a shocking murder. Four women, friends who moved to the area to find healing and solace, must now dig deep and overcome the scars of past troubles to find a ruthless killer. 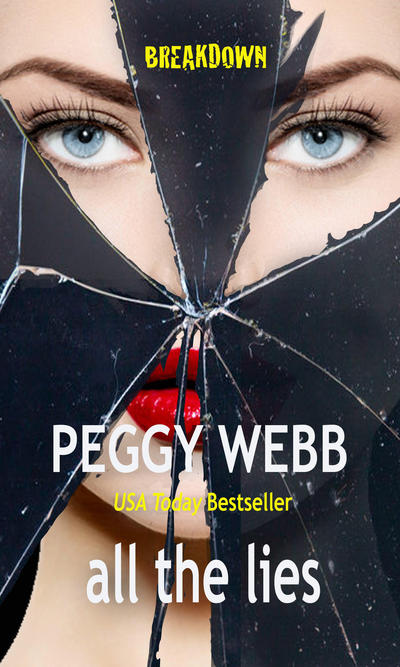 All the Lies
BREAKDOWN Book 3 by Peggy Webb

THE BREAKDOWN BROADENS... Julia Ford was once famous globally for investigative journalism until the story she was covering went so wrong and an unthinkable act put her on the run. She sought refuge in idyllic Shutter Lake, took a job as lifestyle reporter for the local paper and remained hidden in plan sight for five years...until murder snuffed out Sylvia Cole, the young woman who knew too much.

With Sylvia's killer still on the loose, another girl missing and Julia's past showing up in the form of FBI Special Agent Richards, Julia begins a search that uncovers an evil spreading throughout Shutter Lake. Her last encounter with evil ripped her life apart. But this one could destroy some of the town's most prominent citizens and tear down Shutter Lake's very foundation. How far will she go to expose the deadly secrets in a once-perfect town built on lies?

Only twenty days ‘til Halloween. Julia knew. She’d counted. Every October for the last five years.

As if she needed any reminders, ghoulish carved pumpkins decorated doorsteps, faux bats hung from trees, and ghosts lurked in every dark corner of her neighborhood – the one she’d deliberately chosen when she moved here. Nothing bad could ever happen in a neighborhood on a street named Harmony. On a quiet street where kids tossed balls at twilight and mothers stood in doorways calling them to supper, where the blue-ribbon school was just a few blocks away and the police station was within easy walking distance.

For that matter, nearly everything Julia needed was within walking distance. Until now. Until Dana Perkins had pulled her out of a safe rut and asked her to dredge up investigative skills from a life she’d left behind. One of Dana’s students at Shutter Lake High was missing, and she would not rest until the girl was found.

Less than an hour ago Dana had pressed her again about the girl as they stood in front of city hall where Julia’s instincts told her Chief of Police Griff McCabe was lying about closing in on Sylvia’s Cole’s killer. Everybody in Shutter Lake was up in arms about the town’s first murder.

Julia shifted her shoulder bag to a more comfortable position as she strode toward her cottage, a modest craftsman where culinary herbs grew on the kitchen windowsill and light poured through the windows in every room. Julia couldn’t stand the darkness. Nor the pumpkins. Those grotesque masks. She wanted to walk up and slap every one of them.

She glanced around as if someone might have read her thoughts. Satisfied that her secret was safe, she hurried inside to her orderly cocoon. The Victorian wall-hung mirror in the hallway showed a tall, slender woman on the wrong side of forty with long blond hair windblown and blue eyes untroubled. Julia Ford, lifestyle columnist for the Firefly, a weekly newspaper few outside of Shutter Lake had ever heard of, a paper she’d have dismissed as insignificant before she came here.

She nodded at her reflection, satisfied. Her mask was still in place.

Kicking off her shoes she padded barefoot to her kitchen and made her favorite drink, green tea chai from a mix she ordered online. Fading light coming through the stained glass in Julia’s kitchen window turned her walls a rainbow of soft pink and gold. She loved that about California - the mild weather and the perpetual sunlight that gave Shutter Lake a golden glow.

Until the glow got tainted by murder. And now a disappearance. A runaway? A kidnapping?

She carried her drink into the sunroom she used as an office and powered up her computer. Peggy Webb, USA Today bestselling author, has penned more than 80 books in multiple genres and is the most prolific writer the state of Mississippi has ever produced. She also writes as Elaine Hussey. Her acclaimed novel, The Sweetest Hallelujah, garnered praise from critics who dubbed her one of the “Southern literary greats” and compared her to Harper Lee. Peggy holds an M.A. from the University of Mississippi and is a former adjunct instructor of writing at Mississippi State University (2004-2005). A gifted musician and actress, Peggy loves taking the stage at Tupelo Community Theater, singing in a 60-voice church choir and playing her vintage baby grand.

The authors will be awarding a $25 Amazon/BN GC to a randomly drawn winner via rafflecopter during the tour.

What a creative idea for a multi author project, Peggy!

Your excerpt really pulled me in, too.

I very much appreciate getting to find out about another book to read that my family can enjoy. Thanks so much for the info and the giveaway as well.

Do you have any ideas for a sequel? Congrats on the release. Bernie Wallace BWallace1980(at)hotmail(d0t)com