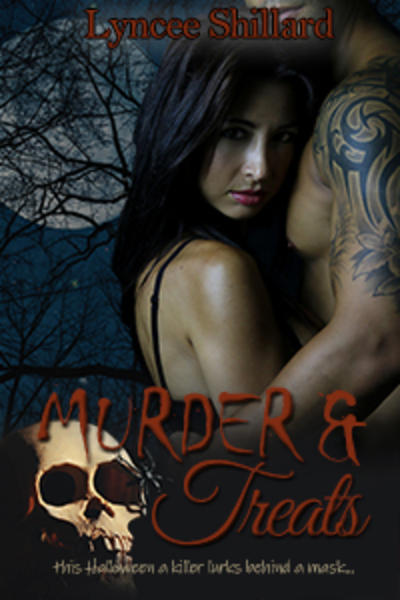 A big shout out of thanks to Lisabet for having me again on her blog. This time I’m all about Halloween… and of course murder…and well doughnuts…and vodka.

My newest book – Murder and Treats – is a novella about all those things!

Lila Maxwell is coaxed into attending All Treats, a Halloween speed dating event by her best friend. Instead of the soul mate promised one Halloween ghoul after another appears at her door until Cowboy Bill.

Jax Carlson has spent the last year focusing all of his attention on starting his own business. Hiring Lila Maxell over the Internet as his project manager was the final piece to his prefect plan. Set to open for business in three days, Jax plans on spending a couple of days on his boat relaxing. However, his friend Erik has a different idea – a speed dating Halloween party.

Jax has spent the night plotting the best revenge possible for Erik until Sally opens the door. The woman dressed in the pale lavender Harem costume ignites a fire that Jax thought was impossible without the aid of his formulated dating list.

After a night of mind-blowing sex, Lila sneaks out before they exchange real names believing it was no more than a one-night stand.

Lila's first day is full of surprises, the biggest being Cowboy Bill is actually her new boss, Jax Carlson. She thinks keeping her hormones in check while convincing Jax that love doesn't follow a formula is complication enough until she learns the participants of the All Treats speed dating event are being killed.

My favorite Halloween doughnut trick is…insert vamp teeth into a sugar doughnut. Drizzle red frosting for blood, or have gummy worms crawling out of the mouth, or decorate with gummy boogers.

And just a peek…

Walking into her bedroom, Lila froze mid-stride. On her bed was a knife coated with blood and small plastic number five. The glass slipped from her hand and fell to the floor, spraying her foot and leg with red wine.

Murder and Treats is available at https://www.kobo.com/us/en/ebook/murder-and-treats

Come and hang out with me... we will talk about doughnuts and vodka...