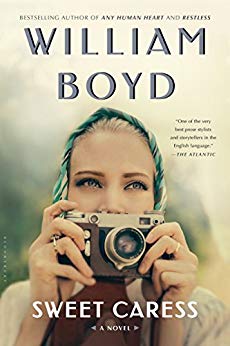 Sweet Caress: The Many Lives of Amory Clay by William Boyd
Bloomsbury, 2015

I’ve been a fan of William Boyd’s novels for many years, entranced by his vivid, clever prose and deeply appreciative of his multi-layer plotting. Many of his heroes, though, in particular the protagonists of Waiting for Sunrise and Ordinary Thunderstorms, have struck me as almost pathologically bland, aimless and unreflective. Thus, I was surprised and delighted by Amory Clay, the heroine of this pseudo-autobiography.

Amory is passionate, contrary, even a bit wild, yet from her earliest days possessed of an astonishingly perceptive sense of herself. Sweet Caress follows her from her birth in Edwardian England, through her childhood in the English countryside with her emotionally distant mother, mentally-ill father, musically gifted sister and autistic brother, to her teenage years when she discovers her vocation as a photographer. Amory never seems to doubt herself or her impulses. She recounts her stint in perverse and impoverished post-WWI Berlin, cataloging the hidden world of whores and cabaret performers; her near-fatal attempt to photograph British fascists in the thirties; her perilous work in the combat zone during World War II and the Vietnam War; her love affairs with her married publisher, a neurotic French author, and the battle-ravaged Scottish lord she finally marries. Through excerpts from a present day diary, written as she approaches seventy, plus her reminiscences, Amory shares her fears, frustrations, joys and meditations. Her lively account, illustrated with her black and white photos from each period, feels so genuine, that I actually had to go to the Internet to confirm that she was not, in fact, a real person.

I was sincerely disappointed to discover she is entirely fictional. At the same, I was astonished by Boyd’s virtuosity in bringing her to life.

There’s no plot in one person’s history, only a series of episodes. That’s true of this novel as well. Furthermore, we edit our memories when we recall our past. Amory is fully aware of this tendency. Reading Sweet Caress, we have a dual view of the protagonist’s life—her recollections of her feelings when she was young, paired with her current understanding of her more youthful self. We recognize that she’s selecting the highlights, the turning points that defined who she was and who she became.

Boyd pulls this off flawlessly, making it seem easy. Amory drew me in, showed me her world through her brilliant photographer’s eyes, made me believe in and care about her.

I was deeply impressed.