The Promise of Canaan 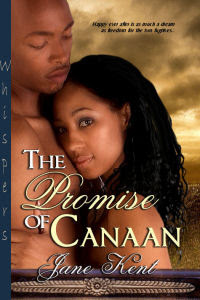 When I decided to enter Whispers Publishing’s African-American Heritage Writing contest, I knew I wanted to write about the Underground Railroad, but I’d never written an historical and I was a little intimidated. From my day job (building period costumes for theatre and film) I know what happens if you don’t get the details right; out of the thousands of people who don’t know if something is historically accurate or not, there is always one who does. And that one will usually let you know if you get it wrong. Adamantly.

But I was a reader long before I was a writer and if there's one thing I know it's that anything you want to know is in a book...you just have to find the right book! I began with Uncle Tom’s Cabin by Harriet Beecher Stowe and moved on to true accounts of the lives of a slaves, harrowing stories of escape and heart-breaking tales of failure and loss.

From there, I moved on to everything I could find about the Underground Railroad and the historical timeline leading up to the Civil War. And then...I had one of those “duh” moments; I live (and have lived for my entire life) within 100 miles of the Buxton National Historic Site and Museum, a museum which celebrates the Underground Railroad and the early black settlement of Elgin in Canada. Also within that 100 miles are two other sites and museums, The John Freeman Walls Historic Site and Underground Railroad Museum, and Uncle Tom's Cabin Historic Site, which commemorates the Reverend Josiah Henson whose memoirs were a source for Harriet Beecher Stowe. So, one lovely summer weekend I went a-traveling and a-researching, and it's a trip I would recommend to anyone within traveling distance of Southern Ontario...you might shed a few tears, but you will leave amazed and inspired by the strength, determination, love and courage of those who fled oppression and enslavement, as well as those who risked their lives to save others from social injustice.

When Underground Railroad conductor Quin Sutton is captured and sold into slavery, his only goal is to regain his freedom. Yet, when the opportunity to escape presents itself, he does not hightail it north as any sane man should and would do. Instead, he heads straight into the heart of danger to honor a year-old promise to a little boy named Thomas…to find Thomas’s sister, Evangeline, and conduct her to freedom.

But Evangeline is not the teenage girl Quin expected; she’s a full-grown woman, and a very beautiful one at that, and, from all appearances, she is most definitely not the saint described by Thomas. Though Quin is disappointed and appalled by the woman Evangeline seems to be, it will not stop him from fulfilling his promise.

Evangeline was born a slave and she has dreamt of freedom every day since she was old enough to understand what the word slavery meant. But she has secrets this stranger, Quin, knows nothing about and beloved people she will never leave behind. Quin’s assumptions, without even hearing the reasons for her initial refusal to leave, are judgmental, arrogant and downright offensive…not to mention, very wrong.

Such an inauspicious beginning does not bode well for the long, dangerous journey to freedom. But as the truth and the secrets are revealed, Quin and Evangeline discover that they have much more in common than only the driving need to escape slavery. Their antagonism changes to respect, admiration, friendship, and eventually the love of a lifetime.

But happy ever after is as much a dream as freedom for the two fugitives. They still have many perilous miles to travel and a risky border crossing ahead of them. And both would rather die than be captured…or see the other captured…and returned to a life of slavery.

She would take this interlude with Quin in this idyllic spot and make a beautiful memory to hold forever. Because this was all they would ever have. All she would ever have of Quin.

She might wish for more but she would not allow herself to hope or dream of more. Quin was not for the likes of her. He was a good and honorable man with a gallant, selfless heart. His father was a minister, for heaven’s sake! He deserved a life with a nice, decent woman who loved him and whom he loved with all his big heart. A virtuous woman. Not a woman who was unclean, who had sold her body…not Evangeline.

As each item of her clothing was removed, Quin’s eyes blazed hotter and hotter, and behind the flimsy piece of linen he held, his cock began to rise, long and thick.

When every item of her clothing had been removed, she stood naked and proud in front of him, letting him look his fill. The sun felt warm on her skin. Quin had been shivering when she’d arrived but he wasn’t shivering now. Now he looked like he might burst into flame any second.

“You are so beautiful,” he said barely above a whisper.

Slowly, she began to walk toward him.

He swallowed and a look she couldn’t decipher came over his face. “I don’t think—” He stopped and then started again. “Maybe we should talk a—”

She reached up and placed a hand softly against his mouth, stopping his words. “Hush. Don’t think, don’t talk, Quin, just feel.” Then she framed his face in her palms and drew his head down until his lips touched hers.

He froze in place. Even his chest stopped moving as he held his breath.

She ran her tongue along the seam of his lips.

He moved then. He shuddered. And then he was most definitely in motion! He dropped the towel, his arms came around her, nearly crushing her, and he took over the kiss.

And it was exactly as she’d remembered. And completely different.

It was as passionate and urgent as their first kiss, setting her senses dancing. But it was not the exploring kiss of newly discovered attraction it had been before, now it was a carnal invitation, a prelude promising more.

Suddenly Quin’s head jerked up, cocked in a listening position. Then she, too, heard what had captured his attention. A soft swishing sound in the woods nearby.

Oh, Lord, one of the others or slave catchers? Either way she did not want to be found naked!

Quin rushed past her, snatched up the quilt she’d brought and wrapped it around her. Then he grabbed his trousers, shoved his legs into them and hauled them up over his hips. He moved to stand in front of her, hiding and protecting her at the same time, as they waited, facing the woods, in tense silence.

There was another quiet rustling from the bushes. A soft black nose poked out and big gentle, brown eyes in a fawn-colored face peered at them curiously.

Evangeline relaxed at the same time as she felt the tenseness drain out of Quin’s body and he chuckled softly. Quiet as it had been, his laugh was loud enough to startle the deer. Her head came up, her ears flickering wildly as she sniffed the air, and then she was gone.

He was looking at her as he said the last and she smiled up at him. She took his hand and pulled him toward the small waterfall she’d explored earlier. “Come with me.”

Bio: Jane Kent has been telling stories most of her life; when she isn’t writing them she’s moonlighting at her day job in professional theatre and film. She lives near Toronto, Canada and is allowed to share a home—as long as she caters to every whim—with two very spoiled cats. Jane’s website is still a work-in-progress but she would love to hear from readers at janekent [at] live.ca and promises to respond to each and every one...though not necessarily speedily!

Email ThisBlogThis!Share to TwitterShare to FacebookShare to Pinterest
Labels: Jane Kent, The Promise of Canaan

Jane Kent is a new author for me but not for long. I look forward in reading The Promise of Canaan.

I'm so glad this little taste of The Promise of Canaan intrigued you! I hope you enjoy reading the story as much as I did writing it...Quin and Evangeline were characters I hated to leave!
Jane

Why exactly did you decide to enter the contest? Was it the challnege because this book is so different from the others you have at Whiskey Press?

Thank you for sharing your book with us today! This sounds like a unique read... a different piece of history to see and live through the eyes of your characters!

Wow, tough question because there was not any one reason...the contest was open to any time period as long as it revolved around some aspect ot African-American heritage.

I have always been fascinated by the Underground Railroad and visiting the museums I mentioned was something I'd always planned to do "maybe next summer".

So yes, it was partly the challenge of tackling something differenct from my other books at Whispers Publishing, partly indulging my interest in the Underground Railroad, and partly because it's not really a topic often found in romance fiction (understandably), so that in itself was a challenge. Once I'd figured out the basic plot (and by basic, I really mean basic, because I'm a pantster, not a plotter!) the story just took off. I often have only a vague idea of my plot but I know my characters well. The first time I heard an author say he or she listened to his/her characters,I thought, "huh?". But from my very first book, I found out what they meant; my characters tell me where the story is going; many times I hear them in my head saying, "I wouldn't do/say that."

Hmmm, ask a simple question, you get a novel!
Hope that answered the question, Anne.

LOL, Colleen! Great minds...that is exactly one of the reasons I explained to Anne for choosing to The Promise of Canaan.

Sorry...that last comment should have read "choosing to WRITE The Promise of Canaan...sometimes my brain gets ahead of my fingers!
Jane

I just wanted to take this opportunity to say thank you Tracey, Anne, Colleen and She for your interest in The Promise of Canaan...and I hope the book lives up to your expectations!

And I'd also like to say thank you to Lisabet for allowing me to be a guest blogger in her absence...what a lovely way to help out fellow authors!

WOW!! I love my history. I know I will appreciate all the research you have done.

Thanks, Marybelle! Doing the research was fascinating; if you'd like to know more about my proccess, I have an article on that topic due to be published July 15th at savvyauthors.com
In the meantime, enjoy!
Jane