Destruction of the Great Wall 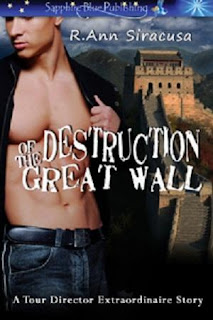 Destruction of the Great Wall is the third book in my Tour Director Extraordinaire Series.

The first book in this humorous romantic suspense series was written as an experiment to see if I could write funny and in first person. I’d never tried either and expected it to be a one shot deal. Instead, I fell in love with the voice and the characters, and they wrote the novel themselves without me knowing where it was going. The second book came about because I was taking a trip to Italy with thirteen members of my extended Italian-American family, including two grandchildren. Knowing the way Italians make group decisions, the trip was going to be a predictable disaster. I figured I should at least get material for a book.

Well, a group of Italian-Americans taking a tour of Italy was a natural for Harriet Ruby, my tour guide extraordinaire. And if Harriet was in it, I needed Will Talbot on the trip with a spy story for him to chase after. So I came up with a story idea, did an outline and wrote the first three chapters before the trip (which provided many funny incidents that spiced up the novel). And once Harriet and Will began to develop their romantic relationship, I had to go along for the ride and wrote the third book, Destruction Of The Great Wall. After all, someone had to type it for them.

I’m Harriet Ruby, Tour Director Extraordinaire. At last, one of my fondest wishes has come true. Will Talbot, my favorite Super Spy and the love of my life, wants to include me in his covert mission to recover a list of double agents for the US government.

Wow! Usually, I want to know everything, and he can’t tell me anything. Now, I’ll be part of the action. I am so-o going to love this!

Not that I have a big role. I only have to pretend we’re husband and wife when he accompanies me on my China tour. The tour group members are strangers we’ll never see again, and we can spend three intimate weeks together. I mean, how hard can that be?

Surprise, surprise. My parents show up on the tour as replacements for some cancellations. Now, we have to lie and tell them we’re married to protect Will’s cover.

And then, other problems erupt when someone tries to kill me and terrorists kidnap me and my mother to lure Will into a trap. Not to mention the damage my assault rifle does to the Great Wall. O, man. It wasn’t my fault. Really!

“What’s the matter with you? You’ve never been uptight about having sex with me before.”

“Right, but I’ve never had my parents listening in the next room, either.”

“Well, we’re not, but it doesn’t make any difference under the circumstances. It’s just the thought of…well…you know.”

Apparently, he didn’t know. He snorted with disgust and levered himself off the bed. “Then let’s get out of here. Beds are dull, anyway.”

“I know that.” We’d made love on every possible kind of surface there was, some of them more than a bit uncomfortable, I might add, and within the hearing distance of all kinds of people.

It never mattered before as long as our professions weren’t compromised. This was different.

I scrambled after him, compelled to defend my reactions. “This is my first hang up with sex, you know. I’m entitled to at least one, aren’t I?”

Will didn’t dignify the comment with an answer. He merely tossed me my bathrobe. I didn’t own a nightgown and hadn’t unpacked my pajamas, but I did have a short dressing gown. I shrugged it on over my birthday suit and shoved my feet into the slip-on sandals that served as slippers. He took my hand and tugged. At first, I thought he intended to leave the room in the altogether, but he stopped and stepped into a pair of slacks and flip-flops.

Without a sound, we left the room and scurried down the hall to the stairs. By that hour, most of the guests were either asleep or in the bar. Still, my heart tippy-tapped at a hundred miles an hour with trepidation and excitement. I didn’t question where we were going. Wherever it was, I could hardly wait.

Hand in hand, we crept down three flights of stairs to the level with the crew’s quarters and out onto the deck, sliding along the wall in the shadows. The chill hit me like a blow in the gut. “Whew, it’s chilly out here. I hope you aren’t planning to spend the night outside.” He hadn’t even bothered to put on a shirt. Poor baby. I would have to warm him up by sharing body heat.

He chortled softly. “Oh, I definitely plan to be, hmm…inside.”

“Smartass. You know what I mean. Where are we going?”

“Right here.” He let go of my hand and went to the railing where the lifeboats hung suspended over the sides of the ship. There he untied the rope holding the canvas cover taut against one of the tiny craft. “In you go.” He motioned me with one hand, lifting the canvas with the other.

“In there?” I thought about some of the other places we’d had sex. I didn’t mind outdoors, but I preferred soft. I peeked under the canvas and my enthusiasm waned a bit. After all, two nights wasn’t such a long time. “It’s stuffy and smells like an arm pit. Are you sure about this?”

With one arm, he lifted me off the deck and flipped me over the side into the lifeboat.

“Hey!” I landed in the bottom with a loud thunk.

Without saying anything, he let the canvas cover fall back over the boat with me in the bottom. In the blackness, I moved my fingers from side to side until, underneath the perimeter seats, I touched something bulky and slightly softer than wooden planks. Life jackets? I pulled out several, wondering what was taking him so long.

Without warning, a thin sliver of light shimmered as the canvas lifted above me. My breath caught and, for a split second, my heart thumped with the fear that someone had seen us and come to investigate. Then Will’s silhouette appeared, a dark shadow illuminated from behind by light from the cabin windows.

“Just me. Who else were you expecting?”

The boat lurched and tipped as he swung his leg over the side. Off balance, I rolled and he landed on top of me.

“Shit. These rigs are small,” he muttered.

“Get off me, you big oaf. You’re hurting my back.”

Gripping his hips, my fingers splayed on his cool bare buns. Wow. He’d taken off his pants before he got in. I hoped he hadn’t left them on the deck. A passing thought about how we were going to get out of there whisked through my mind and out into the ether.

Trying not to make a racket, we maneuvered around in the dark to find a moderately comfortable position. “This isn’t working very well. Try piling the life jackets on the floor to level us out a little.”

With me more or less sitting on the center seat and lying back onto the life jackets, and Will more or less on his knees on the bottom, he covered me with silken heat. His tongue teased my puckered nipples and moved lower. I shivered in spite of being warm enough. Actually, the heat level had risen to hot in there. He had a world-class erection, and I wished I could see it.

“You first.” He pushed open my legs. Extending two fingers, he moved them slowly in a figure eight over my clitoris. Wow. He placed his other hand lightly over my mouth as I cried out. In seconds, I arched and bucked. The boat rocked, creaking and groaning, on its precarious cables. A flood of relief crashed through me. My teeth sank into his fingers as I smothered a near-scream.

Still breathless, I pulled him down on top of me and guided Mr. Johnson inside me, rock-hard, pulsing and ready. My body hummed. A thousand fires ignited. One thrust and the world began to fall away again. Awash in a tide of sensual pleasure, I forgot about everything, including the uncomfortable board at the small of my back.

R. ANN SIRACUSA has been writing fiction and non-fiction for over thirty years. While working in her chosen career of architecture and urban planning, and raising a family, she made time to travel and to write. This talented author combines those loves into novels that transport readers to exotic settings and immerse them in romance, intrigue, and foreign cultures, and give them a good laugh.

Today, she is retired, lives in San Diego, California, and writes full time (which is as many hours as an Italian husband, three grown children, and eight grandchildren will allow on any given day). Her first novel, a mafia thriller, was published in 2008, and since then she has had seven e-Books published by Sapphire Blue Publishing, six in the humorous romantic suspense series Tour Director Extraordinaire.

I have heard of this series, but have not gotten my hands on it yet... great excerpt!

Loved the blurb & the excerpt.

This sounds good. I love stories from 1st POV because I feel the comedy can just roll from that point of view. I also can see the story through that character's eyes.