Counterpoint: Book I of Song of the Fallen 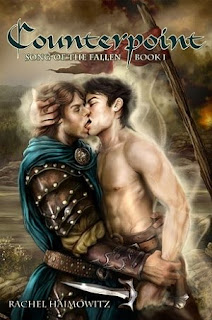 To many fantasy romance readers, the sweeping, elf-filled epic is tired old hat. I loved the idea of world building with the kind of detail epic fantasy allows (and that lends itself to such epic romance in the long run), but I'd long ago lost interest in the trite portrayal of Tolkienesque elves. The solution in the end was to meld my love of epic fantasy with my love of music, to create a system of elven magic and perception based on song. It's fascinating to see how the world changes for you when you filter everything through an inner ear rather than your eyes, when the first thing you do is not see but hear the things and people around you. As music plays such an important role in my life, it was quite creatively liberating (and psychologically fascinating) to create a character (and, of course, his entire race) for whom music shaped the world.

It is the twilight of mankind. Depleted by generations of war with a dark race, the human kingdoms and their ancient alliance stand on the brink of extinction. The outlands are soaked with the blood of the fallen. The midlands are rotting with decadence and despair.

Elfkind, estranged by past crimes, watches and waits for nature to run its course.

And then the two collide.

Ayden's life has long been guided by two emotions: love for his sister, and hatred of all things human. When he's captured in battle, he must for his sister's sake swallow his pride and endure slavery in the service of a human prince. To his dismay, this close-up view of his enemy is nothing like he expected. Now curiosity and contempt make a battlefield of his soul, even as he struggles to pick up the pieces of his shattered worldview.

Freyrik Farr, Crown Prince of Farr Province, finds his new elven prisoner puzzling. He's always known elves to be beautiful and dangerous, but never has one affected him as deeply as Ayden. Can his life of service to his people leave room for this attraction? Dancing on a dagger's edge between duty and high treason, Freyrik discovers that some choices can change a life, and some an entire world.

Between prejudice, politics, pride, and survival, Ayden and Freyrik must carve a new path, no matter how daunting. For nothing less than the fate of both their peoples rests on the power of their perseverance -- and their love.

Behind closed eyes, Ayden saw a long-ago vista, a memory faded by the passage of centuries. There in the long slow caress of bowstrings against the fretted D lay the Meiri Sea, slate blue beneath the high sun. The vibrato—a perfect semitone—rolled like wave upon wave in endless turns upon the rocky shore; restless, dissonant, mournful: awaiting resolution that would never come.

The tempo slowed, warm sweeping notes like sand beneath his bare feet. The music ached, fragile and yearning. Gulls circled on a soaring crescendo, a moist breeze blowing from waters whose salt he could taste upon his tongue . . .

He opened his eyes with a gasp, fingers skimming lips damp with tears. Freyrík played on, his body swaying to some internal beat, held enrapt by a melody that dipped and curved, soared and sank and rose again in tones as pure and perfect as a cloudless summer sky.

Ayden stared at Freyrík’s fingers: so capable of ending a creature’s song forever, now coaxing a thousand new ones into being.

He knew not how long he sat there, how long the prince wove whole new worlds into existence note by note as if a god himself, granted the power to create.

He knew only how bereft he felt when it ended.

Freyrík lowered his instrument, the dreamy smile on his face now joined with a hint of bashfulness. He placed the violin back in its case with all the care and fondness of a parent laying a baby in its crib, then turned to Ayden.

Slowly, so slowly, one of Freyrík’s hands reached out toward him and then stopped, hovering between them. Ayden could not help himself; he clasped it in both his own, pulled it close, turned it palm-up and stared at the gentle curve of the fingers, the band of the signet ring, the calluses on the palm and fingertips and joint of the thumb. He smoothed his own weapons-rough fingers across the prince’s, cool and strong and dotted with little nicks and scars. How was it that these hands, these human hands, had sung of a place he’d not seen since the birth of the Ferals? How was it that these hands—hands that had struck him, bound him, brought him grievous harm—now moved him to tears with their beauty, their hunger and their pain?

He seized the other hand, reading it as he’d read the first, but nowhere in its countless lines or whorls or creases lay any hinting of its power. He wondered what else these hands might show him. How else they might surprise him.

Gifted fingers closed gently round his own, and Freyrík lifted Ayden’s hand to his lips and brushed a chaste kiss across it. His breath puffed hot and fast on Ayden’s knuckles.

Ayden’s own breath, he realized, was coming just as hard.

Freyrík’s free hand reached once more into the space between them—and when had that space grown so very small? There it stayed, fingers outstretched, a question mark hanging in the silence. He swallowed, licked his lips, inhaled as if to speak. Ayden could see his fingers shaking.

They were still holding hands.

Ayden met the man’s eyes, now but a thin rim of blue round big black centers, and silently urged him to ask what he would.

“May I—?” Freyrík said, his hovering hand inching closer.

Ayden wasn’t certain what permission the prince was seeking, but it mattered not. “Yes,” he whispered, and when that caught in his throat, he swallowed and said it again: “Yes.”

Email ThisBlogThis!Share to TwitterShare to FacebookShare to Pinterest
Labels: Counterpoint: Book I of Song of the Fallen, Rachel Haimowitz

First, I fell in love witht he cover; then, the excerpt; then, the book; then, author.

I have become a big Rachel Haimowitz fan and can't get enough of her works!

Clicking on "Insightful Comments" is a tad inhibiting. I feel like I should ponder and come up with something thoughtful and/or witty.

Rachel's a new to me author. I'm drawn to Urban Fantasy which seems to have more world building than other genres.

Have not read Rachel Haimowitz before, I am intrigued about this book... a world shaped by music... would love to see how it turned out! Thanks for sharing!

Hi folks! First, thanks so much to Lisabet for having me over :)

@Anne, LOL! I'm kind of with you on that one. Agreed that UF tends to focus more on worldbuilding than many other genres, although traditional fantasy often does as well if the author doesn't fall back on the usual motif.

@Colleen, I hope the book bring you joy!

Thanks all for commenting :)