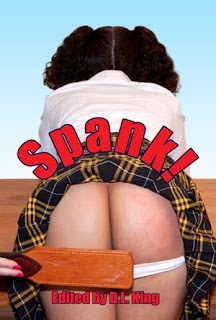 Isn’t this the most adorable cover ever? You know, Facebook deleted it when I began using it as my avatar. They obviously have no sense of humor or, more appropriately, play. Because spanking is more a form of play than probably any other bedroom game.

When I began thinking about what I wanted to do for my next anthology, spanking seemed the natural plan. I, like an awful lot of folks, enjoy spanking as a form of sex play (of course, I prefer to be the spanker, rather than the spankee) and so I thought, what would be more fun than to edit an anthology of spanking stories?

You’ll find a great diversity of spanking stories and styles here. There are stories with men spanking women and women spanking men. There are even a few stories of women spanking women. The only guarantee I can make is the book is certain to make your cheeks blush—I’m not saying which cheeks… Oh, and by the way, there’s even a story by Lisabet Sarai—in fact, it’s the very first one!

With an introduction by well-known disciplinarian, Ms Cassandra Park, these spanking-hot stories are brought to you by one of today's bestselling editors of erotica, D. L. King.

Donna George Storey's "Anthropology" introduces the concept of what a newly spanked bottom feels like to a neophyte and Kathleen Bradean introduces us to a celebrity, desperately in need a spanking, who turns the tables on her feckless manager in "Apple Bottom Hard Cider." Sommer Marsden comes up with a unique dieting tool in "Sugar."

Sure to get your motor running, these stories will really warm your—heart!

“Oh, you’ve found my toy closet,” our hostess said from the doorway.

In contrast, Natasha’s smile was so innocent, we might have stumbled on her childhood collection of Barbie’s.

Then I noticed Andy standing behind her, his leather jacket draped over his arm. He, too, smiled benignly at the array of sexual playthings. Cultural relativism—surely the best defense in any awkward social situation.

Penelope thought for a moment. “Why not?”

Natasha smiled. “That can be arranged.”

My own belly contracted in sympathy, fear mixed with a decidedly sexual tingle of the taboo. I was half-expecting the spanking to occur on the spot, which presented a dilemma. Should I stay and watch or run screaming back to Jane Austen?

Instead, Natasha and Penelope began to discuss their statistics class, while Andy pulled me away to meet a friend. I’d almost convinced myself the whole thing was a dream until half an hour later, when I spied Natasha leading Penelope back into the bedroom.

She closed the door behind them.

Andy and I were seated on a nearby sofa, swapping travel tales with a fellow Southeast Asia hand, but my attention was focused solely on the hushed, but tantalizing sounds floating through the door. I heard Penelope’s voice rising in a question—I caught the words “bed” and “panties”—followed by a long stretch of silence. Had the spanking begun?

I nodded politely as the man droned on, but my eyes instinctively shifted back toward the bedroom. Then I did hear a thwack, then another and another. I cocked my ear for a cry or maybe pleading to stop—or go on--but I only heard a soft murmuring, then another few thwacks. A few minutes later, the door opened.

Penelope emerged, looking slightly flushed, but no worse for the wear. “It feels like my butt just ate Indian food,” she announced.

A few of the guests laughed, but the rest didn’t even bat an eye. Apparently anthropologists were not easily shocked.

“Any other takers while I have the paddle out?” Natasha called from the doorway.

Andy arched an eyebrow at me. I gave him a no-fucking-way-in-hell frown.

But later, loose on wine, I got up the nerve to give Natasha what I thought was a provocative goodbye. “Thanks for the sex party.”

“Oh, that wasn’t a sex party,” she purred. “If you’re interested in a sex party, come back next Saturday.”

Later, in the car, Andy said my eyes popped open so wide, he was sure she’d smacked me on the ass.

In fact, my bottom was still smarting. English lit types might lead pedestrian lives, but we have good imaginations. “That was certainly an education for me, but you seemed to take it all in stride.”

“Have you ever been to one of her sex parties?”

My stomach fluttered with the same confused feeling—fear and desire all tangled together like a couple making love.

Bio: D.L. King is a smut writing—and editing New Yorker who lives somewhere between the Wonder Wheel at Coney Island and the Chrysler Building. She is the editor of the Lambda Literary Award Finalist, Where the Girls Are. Violet Blue gave King’s bestselling vampire anthology, The Sweetest Kiss, the number two position in her top ten Hottest Sex Books of 2009. Carnal Machines, her new anthology of steampunk erotica, will be released in May. A prolific smut writer, her short stories can be found in anthologies such as The Mammoth Book of Best New Erotica, Best Women’s Erotica, Best Lesbian Erotica, Sex in the City: New York, Fast Girls, Please Ma’am, Sweet Love among many more. She is the author of two novels of female domination and male submission, The Melinoe Project and The Art of Melinoe. She publishes the erotica review site, Erotica Revealed. Find out more about D.L. King at dlkingerotica.blogspot.com and at dlkingerotica.com.

Well, I wasn't expecting that cover when the webpage opened. Quite an a.m. eye opener! I love the term smut writer, for some reason it brings a smile to my face.

That cover does stand out... love anthologies... you get a taste of authors that you have not read before...