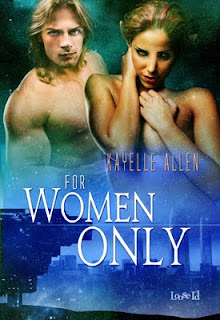 When I wrote At the Mercy of Her Pleasure (the prequel to For Women Only), it involved the hero's brother Khyff being used as bait in a devious plot by the Conqueror. Khyff suffered at her hands, and she allowed him to be abused by others. Because so much of Khyff's life had been negatively impacted by the Kin, a feline/humanoid race, I thought he would never overcome his hate and distrust of them. Enter Kin Ambassador Mehfawni Ruh, whom the Conqueror wanted out of power. Who better to destroy her than a man who already hated her people?

Khyff worked as a security consultant for the company For Women Only, which protected celebrity clientele like the ambassador. The Conqueror set everything in motion for the two to meet, and sat back to watch the mayhem unfold. Like many of us who think our lives are under control, things don't always go as planned. Writing Khyff's and Mehfawni's story taught me the importance of having plans A, B, C, and D ready, and how to deal with a stubborn character who insists he will never fall in love with "one of those aliens."

My experience as one of the first women in a Navy squadron gave me the insight of an outsider, and the drive to claim rights without "rocking the boat." But there are times when the best thing to do is batten down the hatches, brace for the wind, and start bailing water before the ship becomes an anchor. Writing Mehfawni’s patient concern for Khyff's broken spirit showed me that sometimes, what you fear as the worst is truly what you need the most, even when what's coming seems like it will surely swamp your little boat in a tidal wave of things gone wrong.

Khyff is a master of pleasure with a tortured soul. Can Mehfawni redeem the man her people destroyed, or will he destroy her for trying?

Warning: this book contains smokin' hot sex, humor, and angst. This combination has been proven to be addictive. Author assumes no responsibility for the reader's battery consumption in adult toys while reading this book.

Khyff and Mehfawni have had an initial round of sex, and eager to feel the smoothness of a human tongue, she decides she wants to shower first. It opens from Khyff's point of view as the feline-alien beckons him to follow her into the bathing area, and switches to hers when he joins her.

Khyff debated following her or lying on the bed, then padded toward the bathroom, still undecided.

When he reached the door, she was leaning against the shower wall with two of the body jets aimed at the dark triangle of hair between her legs. The vision of all that furskin, dark with water, her thighs wide apart...

Mehfawni closed her eyes, head back, and dragged her claws from her shoulders, down across her plump breasts, along her belly and down to her thighs. She slipped one hand between her legs, playing with herself.

Damn. With me right here.

His heartbeat roared in his ears; his throat tight with heat. A sigh escaped him.

At the sound, Mehfawni rolled her head toward him lazily and smiled, her mouth pouty and lush. She extended her free hand, beckoning him closer. "Want to come and help me?"

"No need to pleasure yourself." He reset the controls for mist, then stepped inside and braced his hands the wall on either side of her ribs. His breath warmed her cheek when he pressed his mouth against her ear. "I'll be glad to take care of that for you."

"I haven't had sex in days, Khyff." She slid her claws into his wet blond hair, raking it back from his eyes. She pressed her brow against his and kissed the rounded tip of his nose. Humans had such cute noses. "I was beginning to think there were no humans I'd be interested in bedding, but I confess, when I saw you at that party, I knew you were the one I was waiting for."

What a white smile he had, with all those teeth almost the same size. No fangs at all. How did he manage to eat meat, poor thing? But it sure made for a unique kiss.

Mehfawni rested her head against the cool tiles of the wet shower wall and opened her mouth while he kissed her. He certainly liked kissing and he did it so well.

When Kin kissed tongue to tongue, the slight barbs on them sometimes stuck together, but with Khyff... He probed her mouth deeply, then pulled back for shallow kisses, licking along her lips, flicking the tip of his tongue over her fangs. His tongue's smooth surface aroused her curiosity. Would he lick her like that on her lower lips and clitoris? What would it feel like between her legs? Would it be like a small, flexible cock?

Raw heat tightened its claws inside her.

Misting water trickled along Khyff's head and neck as he knelt in front of her. The light refracted in the droplets and turned the cloud of hot water behind him into a rainbow. A symbol of promise.

She growled with enjoyment when he set his fingers against her mound and slid them down between her legs. Such a nice firm touch. He handled her almost as if he knew where she liked being fondled. A little to the right and up toward-- "Oh!" She threw back her head, gasping in the wet air. He did know! "There, Khyff."

"Oh, yes, there. Right there." Air hissed in over her fangs. She rose on tiptoe, seeking his fingers.

He looked up at her from where he knelt between her widespread thighs. His blond hair was dark with water. It clung to his head and curled over his brow. His human ears showed. She touched one, her claws carefully withdrawn beneath her nails.

Still watching her, Khyff leaned forward and blew on her wet labia.

Despite the heat of the steaming water, she shivered.

"Your clit is beautiful, Fawni." Khyff massaged her outer lips on either side, pulling them between fingers and thumbs. "It's all swollen and dark. I'm going to love licking it."

She squirmed, arching her back to put her lower lips closer to his mouth.

Khyff turned his gaze on her. "Your labia flare outward and they're moist and hot." He pressed his mouth against her and made tiny kisses down each side of her in turn. Taking his time. Taking too much time...

"Shh… Easy, love." He stroked his hands down her inner thighs. "In time. Anticipation is good. I want you hot."

He set his hands in the hollow where her upper thighs met her body and cupped one palm over her mons. "Not hot enough."

Khyff's unforced smile enflamed her already-kindled passion. "Oh, yes, Mehfawni. I'm going to mouth you until you think you'll die from pleasure." He lowered his lashes and lifted them slowly. "And then I'm going to keep it up until you know you have."

The Edge of Peril - Inside the Immortals' World http://groups.yahoo.com/group/edgeofperil/

Email ThisBlogThis!Share to TwitterShare to FacebookShare to Pinterest
Labels: At the Mercy of Her Pleasure, For Women Only, Kayelle Allen

Have not read either book... this one sounds really hot...

This series sounds different. Most of the time if a hero/ine is alien they are almost the same as your basic human, but in this case, not so much. Probably more realistic this way.

Thank you Colleen. The warning for the book states that I'm not responsible for battery consumption in adult toys while you're reading the story. ;) Khyff and Mehfawni's first love scene is three chapters long. Ice is recommended.

Anne, my mentor for writing alien sex was Barbara Karmazin, who was known as the Queen of Alien Sex. Quite a title to live up to, but believe me, she did. She passed away last year. For Women Only was one of her favorite books. One reviewer had difficulty reading about Mehfawni because she seemed too alien - which alarmed me at first. I later realized that was quite a compliment. I'd made her realistic enough to unnerve someone, and an emotional response is what every writer wants. On the flip side of that feline personality is the hero Izzorah in Surrender Love. He's eminently catlike as well, but he comes across as a lovable pet (with claws) whom everyone loves.