Getting It Right This Time 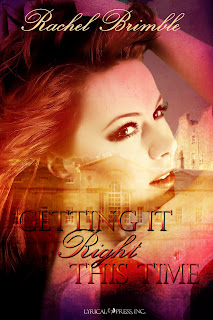 This is my first book with Lyrical Press but fifth published novel and I have to say Getting It Right This Time was the easiest to write because the heroine’s motivation revolves around her daughter. I think as a mother I was entirely involved in Kate’s (the heroine) emotional journey from the start as I hope my readers will be.

She's back, but this time she’s a mother…intent on protecting her young.

Two years after her husband’s death, Kate Marshall returns home seeking security and stability for her three-year-old daughter. But when her path crosses with ‘the one who got away’…her husband’s best friend, she has to fight the desire to be with him for the sake of further heartbreak for her and her daughter.

A tough, straight talking theatrical agent, Mark Johnston is dangerously handsome, exceedingly rich, irresistibly charming – and branded by the tabloids as one of the UK’s most eligible bachelors. So even though Mark lost the girl of his dreams to his best friend, he finds no hardship in being single. Or so he thought.

Determined not to lose her a second time, Mark has to find a way to convince her they can work. But can Kate cope with the media interest and ruthless, money-hungry clients surrounding him, being anywhere near her daughter? Or accept that Mark Johnston is really the family man he claims to be?

As his weight pressed down against her tender breasts, Kate desperately wanted more. All intentions of the controlled seductress abandoned. Her breathing shook. His body was finely tuned, the muscles hard, the stomach flat. His mouth covered her nipple as his fingers trailed beneath the lace of her thong.

She whimpered as he circled her rigid clitoris. He paused to dip into her wetness before slowly easing back to gently circle her again. Her heart pounded and her muscles weakened as he rhythmically built her closer and closer. She closed her eyes and bit her bottom lip to stop from crying out when he pushed his fingers back inside a second time. The years of worry and fear, apprehension and self-doubt, melted from her conscience as thoughts of their future churned Kate’s need, her desire, her belief…

Her torrent exploded and she clung to him as her orgasm crashed through her body, taking her under and sealing her fate with the man she’d always known she should be with--yet never lain with, never touched. Slowly, as each second passed, the sensations ebbed away, leaving her entire body damp with perspiration. She couldn’t open her eyes or even lift her arm.

“Kate?” His voice whispered softly over her skin.

She could hear the smile in his voice, and her heart swelled. She opened them and her breath caught. He stared at her with so much love. Adoration mixed with desire, love mixed with concern. She felt beautiful.

“Thank you,” she whispered.

He smiled and dipped his head to kiss the curve of her neck. Using his tongue and teeth along her sensitive skin, he brushed his hand down the length of her body, under her breast, down the curve of her waist and over her hip. She let out a sigh, ready for round two. He left a trail of moist kisses from her collarbone to her navel as he inched further down the sofa.

She wanted to laugh out loud. Couldn’t he feel what he was doing to her? But she didn’t laugh and she didn’t smile. This was more serious, more real than anything she’d ever experienced. They needed to consummate their commitment now, tonight--otherwise she might wake tomorrow and forget the two of them were joined in whatever lay ahead. She cupped his jaw and he nipped her palm.

“Then make love to me, Mark. Let’s not think past each other. Just for now.”

With his gaze still locked on hers, he stood and took off his trousers and boxers. He started toward her and then stopped. Kate’s stomach rolled with panic. If he…

But then he bent down to retrieve his discarded trousers and took his wallet from the pocket. The silver packet winked beneath the light and she grinned. He ripped open the packet and eased on the protection.

She beckoned him forward and the sofa dipped beneath their weight as he hovered above her. Without word or aid, he guided himself inside her. Kate moaned with pleasure.

His thrusts were slow, controlled and purposeful. Digging her nails into the smooth skin of his shoulders, she savored the sensation of his massive strength against her slender frame. She felt his urgency swell with her need and slid her hands down to his buttocks, pushing him deeper until neither of them could wait a moment longer. And when the explosion came, it took her breath away and Kate clung to it, humbling to its power and letting it bond her to the man she’d never stopped loving.

Bio: Rachel lives with her husband and two young daughters in a small town near Bath in the UK. Having always believed there’s someone for everyone, Rachel started writing her own tales of love once her children were at school. Since then, she’s had several books published with The Wild Rose Press, Eternal Press and Lyrical Press. She aspires to secure an agent in the near future. A member of the Romantic Novelists Association and Romance Writers of America, Rachel cannot imagine her life without romance or writing!

When she isn’t writing, you’ll find Rachel with her head in a book or walking the beautiful English countryside with her family. And in the evening? Well, a well-deserved glass of wine is never, ever refused…

Email ThisBlogThis!Share to TwitterShare to FacebookShare to Pinterest
Labels: Getting It Right This Time, Rachel Brimble

Oh I really really like the sound of this book! Thank you for sharing a piece of it with us! And great cover... stands out nicely!

The cover artist is Renee Rocco and I LOVE this cover too!

The most dangerous creature in the wild is a mother protecting it's young. I can relate.

Loved the excerpt and have added this to my wish list. I look forward in reading your works, Rachel.