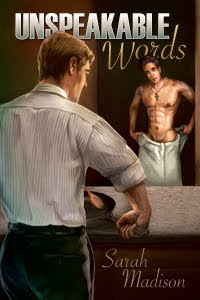 I write M/M romance because I enjoy the power dynamics between two male characters. There is so much potential for built-in angst and drama—will the relationship threaten their careers? Will it be accepted by their families or even, ultimately, themselves? There’s a saying, “Once you’ve read M/M romance, you won’t look back.” I have to admit, I was one of those readers whose head was turned by the innate hotness of two good-looking guys getting it on. The writer in me, however, loved the potential complexity available to me as a story-teller. Many times, for the sake of dramatic storytelling, a writer has to come up with contrived reasons why two characters can’t be together right from the start. Not so with most M/M romance. I also love that it allows me to explore different aspects of my own personality without overtly inserting myself into the story that I want to tell.

Special Agent John Flynn is everything Jerry Parker is not: dangerously handsome, coolly charismatic, and respected by his peers. Special Agent Parker is dedicated and meticulous, but his abrasive personality has given him a reputation for being difficult. When new information on a cold case appears, Parker is assigned to work with Flynn, and the sparks fly as their investigative styles clash. Contact with a strange artifact changes everything when it bestows unusual and unpredictable powers on Flynn... and the two men must learn to trust each other before a killer strikes again.

He sensed Flynn’s presence behind him before he heard him speak.

“Something smells good in here.”

Jerry turned to say something offhand but then completely lost track of what he’d intended to say. Flynn was standing in the doorway to the kitchen, wearing a towel slung low around his hips so that the bones of his pelvis showed. The hair on his chest was not too much, just right in fact, tapering down his long torso until it disappeared beneath the towel. He was drying out one ear with another towel, his hair standing up in startled spikes. On the chain around his neck, he wore a simple, tiny silver cross, the kind that a pre-teen girl might wear. His left shoulder bore the ugly, puckered mark of a bullet wound, the shiny scarring of skin suggesting that the wound wasn’t all that old. Jerry knew from his record that Flynn had been shot in the line of duty about six months ago but the record didn’t say much more than that.

Flynn had shaved but his jaws still held the suggestion of a beard. It was probably as close as he ever got to being smooth-cheeked. A hint of soap and the smell of clean, damp skin and aftershave wafted in Jerry’s direction before being lost to the smell of coffee and bacon. The combination of odors struck Jerry viscerally with a little bolt of lust that surprised him.

“Breakfast will be ready in a minute,” Jerry said tersely, turning away to get a second mug down from the cabinet.

“You didn’t have to go to all this trouble,” Flynn said, slinging the towel in his hand around his neck.

Jerry shot him a look. He wondered what kind of game Flynn was playing here. He obviously was aware that Jerry had checked him out; it was evident in the little smile that played around his lips. Was this his way of saying he was so secure in his sexuality that it didn’t bother him? Jerry suspected that was the case.

“Oh. Right. Never mind. This is how you always start the day. What’s in the oven?” Flynn looked amused, something subtle in his eyes that suggested it was at Jerry’s expense. He also looked completely comfortable there in his stupid towel with his hairy legs and his bare feet.

“Frittatas,” Jerry said crisply. He blamed the heat of the oven for the flushing of his face.

Jerry found his eye drawn to a single bead of water dripping from one of Flynn’s sideburns, making its way in a crooked line over his collarbone. He swallowed before speaking. “Philistine. Yes, some egg-thingy. Best eaten hot. You’d better get dressed.” He cleared his throat.

Flynn gave him a little half-smile and left the room. Jerry watched the way the damp, soft terrycloth of the towel clung to his ass as he walked away. He took a sip of coffee and made a face as he realized he’d forgotten to add cream. Yep. It was going to be a long day.

Bio: Sarah Madison is a veterinarian with a busy practice, a great boyfriend, a large dog, and an even bigger horse. She enjoys hiking along the Appalachian Trail with her German Shepherd and competing her horse in the sport of combined training and eventing. She recently rediscovered her love of writing when she began writing fan fiction several years ago and has won several awards for her fan fiction stories. This gave her the impetus to pursue a lifelong dream of writing original fiction for publication. Writing has become a passion that sometimes takes precedence over everything else. In fact, when she is in the middle of a chapter, she usually relies on the smoke detector to tell her when dinner is ready.

o Cover image as a separate JPG, resized to 300 wide if possible. Alternatively, you can send me the URL to an image of about this size. (attached) Thanks! Sarah Madison http://www.sarahmadisonfiction.com/ http://akasarahmadison.livejournal.com/ http://twitter.com/akasarahmadison
Posted by Lisabet Sarai at 4:02 AM

I love S. M.'s writings. With realism and humour, she easily and delightfully gets the reader to loose themselves in well-crafted plots. She is undoubtedly one of the great story-tellers of the genre.

S.M is one of my favourite authors. Her writing has a depth which completely draws the reader into the story and takes them on a journey where anything is possible.

I love Ms. Madison's writing style! Her characters are so interesting and full of life. I can't wait til the next book.

Unspeakable Words sounds good. You are right that m/m romance has the conflict right upfront with whether or not the relationship can be accepted by so many people. I like watching how the relationship changes as the story develops.

Once I read my first M/M romance, I never did go back....

The details just in this excerpt are perfect, from the too low slung towel (although I suspect we're all rooting for it to fall off ;-), to the scar of the bullet wound, to that drip of water.... yummm...

Looks like great fun is to be had by all! Nice!

I have not had the pleasure of reading Sarah Madison's books... sounds like I should add them to my list! Thanks for sharing!