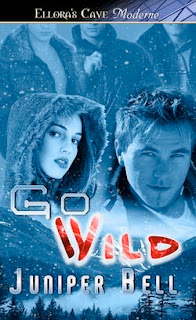 I’ve lived in Alaska for four years, but this is the first book I’ve set here. I was waiting for some kind of unique twist to come to me. Finally, during the umpteenth blizzard of my third winter, it did. What if an Alaskan town came up with their own crazy, let-loose, go-wild, dump-your-inhibitions way to let off steam in the middle of winter? That was the inspiration for the festival called Wild Nights, and GO WILD is the first story in the series. Next comes GO DEEP, then GO FOREVER, then….I’m open to suggestions! Got any ideas?

Lars loves Katia. Katia loves Lars. Lars wants to marry Katia. Can he convince his free-spirited lover that marriage will be as fun as her sexually adventurous single days?

Never before has Katia been tempted to give up her carefree ways. She’s deeply in love with Lars, but she doesn’t know if he can handle her wild side—or wilder needs. But Lars is a hard man to resist. The former Olympic champion won’t give up, not when he knows just how to please her.

The people of Wild, Alaska, know the best way to survive winter is to let off a little steam. When his buddies hit town for Wild Nights, a notorious winter festival with one rule—“anything goes, nothing counts”—Lars has the perfect opportunity to prove he’s the man for Katia.

Reader Advisory: Features an extended ménage (M/F/M/M/M) and references to bondage experimentation and sexual escapades of all types. Woohoo!

Katia tried not to stare at the smorgasbord of bare, muscular male flesh crammed into the tiny sauna. “Nice to meet you. I hope we’re not interrupting.”

“Hell, no. We were just talking about sheetrock,” said Jake with a chuckle.

“Anything would be welcome. Especially you. Very happy to see you.”

Shouldn’t he say “meet you”? Remembering she was naked, Katia put her hands to her bare breasts and found her nipples just as hard as before. Maybe even harder. Behind her, Lars cupped her ass. The feel of his warm hand made her pussy twitch. Or maybe it was the feeling of these men’s eyes on her.

His whimsical tone immediately put her at ease.

“Well, if it’s for science,” she said teasingly and dropped her hands. A moment of silence followed while the three men looked their fill.

Someone let out a rough sigh. The atmosphere in the room shifted to something more intense, more electric.

Lars ran his hand down the cleft between her buttocks. Did it bother him to see three men visually devour his girl? It didn’t seem to. In fact, she felt his erection poke against her back. Apparently it turned him on. Maybe because the men were his friends?

“So you got room in there for Katia and me?” Lars asked.

“Our casa es su casa,” said Jake, flinging out his arms in invitation. “I’ve been keeping the place warm for you.”

“Trust Jake-O to take credit for a fire I made and tended.” Marlowe wiped his forehead with a small towel. “Good thing I’m too lazy to beat his ass.”

A snort was Jake’s only response. Katia wondered if Eagle ever said anything. So far he seemed quiet. Maybe he was falling asleep, or zonked out from the heat.

“Don’t let us scare you off,” said Marlowe. “Go on up and have a seat next to that studly fellow there. If he doesn’t treat you right, you let me know.”

Jake shifted a tiny bit to his left to make a little more room for Katia. She took a step forward onto the clammy wooden planks that made up the sauna’s floor.

“If anyone treats her wrong, they’ll answer to me,” said Lars, still behind her. He gave her a little spank on the ass. Katia felt her flesh tremble and her nipples perk up— more.

A warm, melting feeling spread through her. The feeling of an adventure about to begin.

Lars took Katia’s arms and held them behind her. Her mouth fell open in astonishment. He drew her up on the tips of her toes so her back arched and her breasts protruded in blatant display. The three men appeared riveted by the sight of her naked body presented to them so invitingly.

Through her haze of surprise, she wondered what they saw. A slim, taut, pale body, long dark hair, erotically aroused nipples. A shadowed triangle between her legs.

“This woman,” Lars said in a husky voice, “has been making me crazy since the moment I met her. She’s the most sensual, most passionate, most lovable wild thing you’d ever want to meet. And she has the idea that I’m a straight arrow who can’t handle her free-spirited ways.”

For the first time, Eagle made a sound, something between a snort and a cough. “I thought you’d say that,” said Lars. “And it’s true, since I met Katia I’ve been more of a stay-at-home type. It’s only normal. We had to cement our relationship, right, love?”

“What’s going on, Lars?” she whispered, turning her head against his chest.

“You. Me. Three naked men. A sauna. Whatever you want.”

She turned her head back toward the men, who were studying her body with complete and thorough attention. The tension in the room went up another three notches.

“I told you before I trust these guys with my life. When you’re out in the back country you have to rely on each other. We got stuck a few times and had to figure our way back.”

He ran his hand up the side of her breast. “If it suits you, we’ll keep going. If it doesn’t, we’ll stop.”

She shivered as her nipple hardened further. Between Jake’s strong legs, she spotted an answering rise. “Why are you doing this?”

Lars bent his mouth to her ear. “Because I love you. Every bit of you, you wild thing. And I want to prove it. ”

Katia’s body pulsed with excitement. How long had it been since she’d had a sexual adventure like this? She’d forgotten the adrenaline rush of the wild unknown. The thrill that reached deep inside her and made her feel like a goddess.

And to have Lars participate, no, even more...to have him take charge of her like this...what an unexpected miracle.

Her email is juniper [at] juniperbell.com

Wow 4 men... that is alot of attention! Sounds like a very hot series!