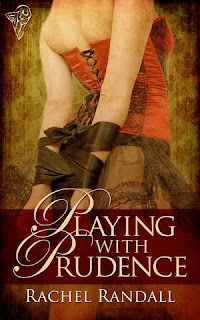 In Playing with Prudence, rules aren't there to be broken. They're to be flirted with, to be teased and stretched to their boundaries. And within those flexible boundaries, there's the comfort and safety of knowing someone who loves you is watching over you to make sure you don't overstep.

The story is set in the mid-1860s, within an established D/s relationship. Layering the distinctive rules of Victorian society over the complex personal play between my married couple, Prudence and Ned, provides the backdrop – adding the wildcard of their lust for their handsome houseguest Harry gives their already kinky boundaries that deliciously spicy push. The excerpt I want to share with you is the perfect example of how in Playing with Prudence, obeying the rules (and the sexy, dominant man who sets them) is much more fun than breaking them.

Fantasies are even better when they’re shared.

Prudence loves the sexy games her husband arranges for her, and she craves the punishment for losing as much as the pleasures of victory. Edward is frustrated, however, that Pru denies them both her true submission by telling herself they are only playing.

Carefully, almost reverently, Harry brushed his hand across the swell of her breasts. Her areoles ached for his attention, but he shied away from the swollen centres, concentrating instead on shaping her curves with his fingers.

There was warning in the way he said it, a flavour so familiar it had her muscles tensing in anticipation. Harry heard it too, his answer coming in the way he finally squeezed her breasts, forcing her nipples into even tighter peaks beneath the clamps.

“Hurts...” The lingering slide of sound she made gave the lie to it, however. Mere words couldn’t convey how, for her, pain was never a simple sensation.

Harry groaned, his fingers splaying possessively over her skin.

Instinct had her fumbling for the belt of his robe but that same instinct stilled her hands again. “May I?” She kept her eyes trained on Harry’s cock, sleek and hard and hot already. She trembled from the effort of not touching him. Ned’s reply was long enough in coming that she felt hysterical panic well within her. Please—please—

Quickly, before Ned could change his mind, Pru grasped Harry’s erection within her circle of fingers. She stroked around the flared head, delighted when his foreskin drew tight for her. Harry’s legs spread to give her better access. She felt as much an adventurer as he in that moment, as she explored the unknown territory of his body. Gently, she squeezed Harry’s balls then slid her hands around to touch the firm globes of his ass. It was just the shape of him against her palms, but she was so accustomed to the contours of Ned’s body that the small differences were astonishingly amplified.

She dug in her fingers, hard muscle flexing under her touch while his robe brushed against her knuckles, filling her with ideas. She longed to see those muscles at his chest, his shoulders, bunch and tighten.

Ned uncoiled and stalked towards them. “What?”

Pru licked her lips, tongue-tied, even as her hands twitched at the edges of Harry’s robe. She didn’t fool Ned for an instant, of course. His eyes narrowed, causing a delicious line of fear to shoot down her spine. But he smiled sweetly at her.

“Absolutely,” Ned said, still with that sweetness. “By all means, Harry should show you the body you lust after like a bitch in heat.”

Her skin blazed with humiliation as she snatched her hands back from Harry’s skin. The dirty whispers that Ned pulled from her in the dark of their bedroom were one thing, but here, in front of Harry, she felt more naked than bare skin could make her.

Ned walked right up behind Harry and pressed himself against his back. Harry—unable to see him but clearly feeling every inch of him—froze in surprise, his face going slack when Ned wrapped his arms around his chest and pulled the robe open across his shoulders.

Ned said, “I feel sorry for her right now. All her fantasies out in the open. Forced to admit there’s nothing civilised about her after all, that deep down she’s just panting for your cock.” He slid his fingers down the wide lapels of Harry’s robe and, with a showy spread of his thumbs, lifted it back over Harry’s shoulders and dropped it down onto the floor between them.

For a cunt-drenching moment, the two men were pressed together, one of Ned’s thighs pushed proprietarily between Harry’s spread legs. “You like this,” he said. Soft. Dangerous, but she couldn’t bring herself to care, because she did like it, very much. “Your Master undressing your lover.”

This,” Ned snapped, “is the worst fucking example of punishment I’ve ever fucking seen.” Mouth near to Harry’s ear, he said, “Do I need to take over?”

Rachel Randall is currently enjoying the good cheese, cheap wine and excellent trains of European living. She believes in evidence-based smut, and keeps a pet scientist in the house for peer review.

Bio: Rachel draws inspiration from the kinky, classy, cool of London. She writes characters with interesting day jobs, who know what they want and how to ask for it (usually with a slow slide down to their knees). Her favourite words include “indulgence”, “filthy”, and “Here are your backstage passes to the Franz Ferdinand gig”. One day she’ll figure out how to get away with naming a character after Isambard Kingdom Brunel.

I will never look upon prudish Victorian society the same way again. I mean look what happens behind doors.

New to me author but out this on my list to read
Meandi09@yahoo.com

The Victorians were not prudes as we often imagine. They left behind an interesting bit of literature. Playing with Prudence sounds really good.

Rachel Randall is a new author for me, but not for long. I look forward in reading her works.

Living in Victorian times would have been D/S enough for me, but I do enhjoy reading about it.

Rachel's a new to me author too.

Glad to see everyone's enjoying the excerpt...My Victorians aren't prudish, that's for sure! ;)