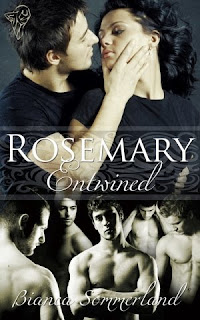 Writing Rosemary Entwined started as a ‘What if?’ and turned into so much more. The fairytale Snow White seemed tailor-made for a ménage story and what fun to give this lucky girl who needs to feed on lust to survive seven hot guys to snack on. I had sources galore to use for climactic scenes, but something was missing. Halfway through the story my heroes started grumbling and I had to take a step back because I couldn’t hear myself think over the noise. Then it hit me. How are these men supposed to enjoy a relationship with this girl they share if they can never have a special moment with her?

In my opinion, that is what makes this story great. Those special moments the men demanded they be given with Rosemary. She’s got herself some smart guys!

Curled up on the pillow, Rosemary watched Largo as he bent down to slip the DVD into the player, his boxers outlining his ass to perfection. He pressed play on the remote as he took his place. Kurt brought her a beer and sat on the floor behind her, leaning against the sofa. The movie started, darkness and ghostly music that filled the room and pulled them all in. The first scene gave her goose bumps, but she managed to hide her fear until the white face of a child flashed behind a woman searching for the source of a strange sound. She hid her face and an arm wrapped around her shoulders.

“No one’s even dead yet,” Felix whispered, grinning through the tousled blond hair that had fallen over his face. “You’re scared already?”

“I’m not scared.” Rosemary said into the pillow, peeking past it and biting her lip when the woman turned to look around the now empty room.

“Give her another beer.” Alaire reached for a case by the sofa and pulled out a beer. “She’ll start finding it funny.”

“I don’t know if we should let her drink too much,” Kurt said from behind her, tone dry. “She might get ideas.”

“And that’s a problem for you?” Alaire twisted the cap and jumped at a blood-curdling scream. The beer slipped from his hand and spilled into his lap. He made a face. “Pause the movie, I gotta clean this up.”

For three minutes they waited, listening to the shower, Wylie taking the initiative to mop up the mess on the floor. Alaire came out of the bathroom in nothing but a towel, running his hands through his close-cropped hair, and plopped onto the cushion at Rosemary’s side.

Rosemary watched the droplets of water trail down his chest to be soaked into the worn, white towel.

“Go ahead,” Alaire said, grinning at her as he got comfortable.

“Cheater,” Felix mumbled from her other side.

While the movie continued, Rosemary tried to focus but couldn’t help be distracted by the tempting, damp morsel, so close little drops hit her knee ever time he shifted. She glanced around to make sure everyone was watching the movie and let her hand drift to Alaire’s stomach. He moved closer, resting his head against her side, the dampness of his hair soaking right through her dress. A hand settled on her knee and she gave Felix a covert look, her lips curving at the way he fixed his eyes on the screen and slid his hand slowly up her thigh. Alaire’s hand rested on her other knee and she bit her lip as his touch mirrored the path Felix was taking.

“Are you watching the movie?” Kurt whispered in her ear as he knelt behind her and lifted her hair off her neck and laid it over one shoulder.

“Uh, huh.” Rosemary swallowed as he pulled the strap of her dress off her shoulder and distracted her with soft kisses while his hand curved under her breast and his thumb grazed her nipple through the fine cloth.

“Try to focus on what’s happening, keep your eyes open, even during the scary parts.” Kurt’s words were like another touch, one that played on all her nerves, from the sensitive curve of her ear to the nipple he teased, and down to where Felix and Alaire’s hands met at the juncture of her thighs. She tried to follow Kurt’s instructions, but the unspoken agreement of the other boys made it difficult not to cry out and writhe, never mind watch the movie.

Whose hand was where she couldn’t tell, but suddenly her panties had been shifted and two fingers had breached her, moving in harmony with the pair that circled her clit, playing her to a blind crescent of pleasure.

“Slow it down, boys,” Kurt said, sliding the other strap down and baring her breasts. He covered them both with his hands and massaged gently. “She’s having a hard time getting into the movie.”

Bio: Bianca Sommerland was born and raised in Montreal, Quebec. When not reading neurotically or writing as though the fate of the world rests on her keyboard, she is either watching hockey or teaching her daughters the beauty of a classic, steel pony while reminiscing about her days in Auto Body Mechanics. Her time is balanced with utmost care between normal family life, and the internal paranormal realm where her characters reside. For the most part, she succeeds. You can find her at http://imnoangelauthorsblog.wordpress.com/

Oh I definitely want to read more of this story! I have it on my list to get, but do not have it yet...

This book is awesome! I read it and loved it :)

I'd like to read it to see more of the dynamic between Rosemary and so many men. Sometimes when I read menages, I'm thinking about how everyone fits together and where all the limbs are, etc. instead of just accepting it and enjoying it as is.

How DO you keep track of the limbs and the pronouns?

@Amber I cheat. Rosemary is rarely with all of the men at the same time. ;)

@Anne To be honest, I focussed a lot more on the relationships than the sex. There's still plenty of hot sex scenes, but keeping the numbers down in the 'bedroom' makes it easier to keep track of everything.

@Colleen I hope you get a chance to read it and enjoy it.

Thanks to everyone for commenting!

Hmmm, I'd definitely have trouble getting into the movie too! Yummy excerpt!

LOL
I agree with Cherise. The movie would be my last concern.
If this is as hot as Deadly Captive I need to get my fan out.

@Cherise and Cari, thanks for stopping by! :) I'm happy you guys liked the excerpt, it was really hard to pick one, I wanted to include as many of the men as possible, but not spoil the end of the story.

Cari, it's a different kind of hot than Deadly Captive, but you'll probably need your fan ;)

This is a great book.

I would love to read this book, the excerpt sounds amazing! Now if only my library had a copy...