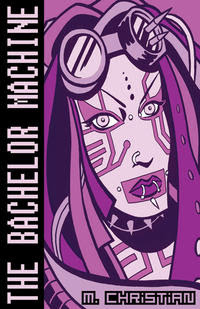 The words jammed in my throat and stammered, but they came. I felt my body break sweat from my feet to my face, a fever of fear and disgust that made everything waver in the hot room. I wanted to drop away, to give up completely and just let him have me, do what he wanted to do with her. I just didn’t want to watch anymore.

But I didn’t think, not once, of cutting the connection. I didn’t know then why, and I don’t know now.

Take off your blouse, take off your bra—I know they’re hard because I can feel them. Do nothing, do not say anything. Just stand.

I did. She turned quick and wrapped her lips around my right nipple, sucking with her strong lips, teasing it with her strong teeth. One hand, her right, reached up to tickle my left nipple.

Take her hair, force her back.

I did, drawing her off my nipple. Then she was free, panting like she’d been running, eyes fixed on, first, my crinkled, hard nipple, and then, second, my face.

Draw her up, pull her up by her hair. Do it!

I lifted her by her hair and, with my other hand, her chin. She helped by climbing up onto her knees. Then she was kneeling in front of me. A nipple (like a drop of coal on her breast), I saw, mesmerized, had fallen free of her bra.

I did, my arms following his directions—my mind disconnected, retreated into doing exactly what he said to do. Her breasts were lovely and dark: large but not fat, bigger than mine—they barely fell as the bra snapped and tore in my hands (she almost falling forward by my earnest ripping).Two nipples out, then, both large and hard, blacker on black.

Tell her that if she makes a sound or moves away the game is over and we will leave. Tell her—

I did, his words falling from my mouth.

Take her nipples in your hands, thumbs and forefingers, and squeeze. Hard! Harder than that—you idiot, this is what she’s here for. Do it!

I thought about reminding him of our contract, that I could have a case of cutting him for abusive treatment of me. I didn’t, though. I didn’t. I couldn’t say a word, I just took her nipples and captured them in my hot and sweaty hands (dimly aware of his cock, a phantom ache of hardness somewhere) and squeezed as hard as I could.

Her eyes got wide. She began to breathe, hot and heavy, like a horse after a race, sweat making her reflect the dim green light in the room—polishing her with pain and something else. I was aware of her smell, rich and strong, as I watched her pupils widen till she stared at me (at me?)—black walnuts quivering in pure cream.

Run your fingers through her cunt, get her juice on your finger tips. Hold them in front of her face. Say, “This is what you are.”

I did, my body did, my mind in the back shaking with fear and something else. She sucked my fingers, tasting herself and growling in heat.

Take her, turn her hard and throw her on the bed.

I did. Her ass was tight, hot, and glimmering on the bed. Her smell was even stronger. She rose up on all fours, the perfect globes of her ass parting, showing me herself, offering herself to me.

I held the crop and did not move, trapped between his bellowing voice and my own arm. I only did what he said I had to do. He did not have control. I would break the connection, pull myself in, zip myself up, and leave.

Coward. You are afraid. Gott, you feel it, but you are scared. She wants this, she needs this as much as I need this. She wants the crop, idiot. She wants to feel your force, your power. That is why she is here, why I am here. Do it now, fool, or I will break and report you: we do this because we want to do this. I take nothing that is not offered.

Look at her, she wants it more than your body. Hit her, damn you, hit her and give us what we both want!

Anger was a vibrating wire in my guts, around my spine. The crop was light in my hand—but I knew he felt it more than I did, my senses rerouted to my fare.

Bio: M.Christian is - among many things - an acknowledged master of erotica with more than 300 stories in such anthologies as Best American Erotica, Best Gay Erotica, Best Lesbian Erotica, Best Bisexual Erotica, Best Fetish Erotica, and many, many other anthologies, magazines, and web sites. He is the editor of 25 anthologies including the Best S/M Erotica series, The Burning Pen, Guilty Pleasures, The Mammoth Book of Future Cops and The Mammoth Book of Tales of the Road (with Maxim Jakubowksi) and Confessions, Garden of the Perverse, and Amazons (with Sage Vivant) as well as many others. He is the author of the collections Dirty Words, Speaking Parts, The Bachelor Machine, Licks & Promises, Filthy, Love Without Gun Control, Rude Mechanicals, and Coming Together Presents M.Christian, Pornotopia, How To Write And Sell Erotica; and the novels Running Dry, The Very Bloody Marys, Me2, Brushes, and Painted Doll. His site is www.mchristian.com

Another new author for me... thanks for the introduction!

New to me author too. I gotta say you've had some interesting guest posters this month.