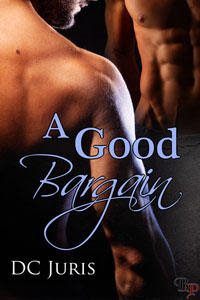 This story came about after a conversation with a friend of mine, who is also one of my most avid readers. His question, after reading something of mine, was, "How come all the m/m stories I've read feature young hunks? What about us older studs?" I had to agree with him, for the most part, so I wrote him a story with an older stud…and a young hunk.

Awkward and unsure, David has finally reentered the dating scene. A hot, young stud-muffin named Brandon seems like the perfect start, but things get complicated when Brandon makes a startling confession. Is Brandon the right choice for David, or did David just get way more than he bargained for?

"There's this odd look of mayhem on his upside-down face..."

"I love this part." David chuckled, watching Brendan Gleeson's character hanging by his ankle from a tree.

Brandon inched closer, laid his hand on David's thigh. David bristled under the touch for a moment, forcing himself to calm down and relax. This was what he'd wanted, after all—to start dating again, to experience another man again, to have something more than fond memories and his Fleshlight to look forward to every night.

Brandon moved his hand, slid it just down to the inside of David's thigh. Waves of fiery need pulsed through David. He tried hard to concentrate on the movie, but all he could think of was Brandon's willingness. Brandon sighed and snuggled against David's shoulder, slipping that hand a little higher.

Throat suddenly dry, David thought of all the reasons not to have sex: they'd only just met, Brandon was most likely barely even legal, what kind of example would this be for his son? David sucked in a breath as Brandon spun around and hopped over so he sat in David's lap, knees straddling him.

Brandon leaned in for another kiss, this time not so soft and gen- tle. Demanding lips met David's, and he gave in, opening his mouth and groaning as Brandon's tongue slipped inside to twine with his. Brandon worked the buttons of David's shirt open, dipping his hands under the fabric and running his fingers through the hair on David's chest.

Fuck. Oh, fuck. That touch. David's resistance melted, and he arched up against Brandon's hands, tangling his own in Brandon's long, dark hair, holding Brandon's head tight. Brandon somehow managed to unbutton his own shirt and he pressed their naked chests together, sliding his arms around David's back; fingernails raking him from shoulder to just above his waistband.

David broke the kiss with a fevered gasp. "Jump."

Brandon grinned. "Booyah. Drop trou, baby." He stood and dug into his pocket as David frantically worked his jeans opened and pushed them and his briefs down to his ankles. "Wow. Nice package, babe."

"And then some." Brandon held a condom and a small tube of lube in his teeth as he shed his own clothing. He turned and presented his backside to David, holding the lube out behind him. "Wanna do the honors?"

David's hands shook as he reached for the lube, and it took him several tries to finally open the damned bottle. Brandon stood there patiently the entire time, giggling as David squirted out the lube and began spreading it around.

David blushed and lowered his head. He'd always liked sexy talk, but to say Alice hadn't was the understatement of the century. He slipped two fingers inside Brandon's tight opening, his own cock fairly bursting as Brandon rocked back against him, making sweet little noises.

Brandon cast a glance over his shoulder, eyes heavily lidded. "I'm ready for more if you are."

David nodded without speaking. He didn't trust his voice not to break or crack with excitement. He pulled his hand away as Brandon turned and dropped to his knees, looking up at him with a wink.

"But first..." Brandon lowered his head and David cried out, un- able to still a thrust of his hips as Brandon's hot, wet mouth enveloped his cock, taking him deep.

Bio: A Southern transplant who has retained none of his accent but all of his charm, DC Juris is an out and proud transgender bisexual living in upstate New York with his husband, four dogs, three cats, and a menagerie of Halloween props just creepy enough to keep people guessing about his sanity. He's still hopelessly single when it comes to the woman in his life, and he'll gladly entertain offers or applications for the position! In the rare event that he's not writing, DC can be found surfing the internet for random research, killing things on his Xbox, reading, taking pictures of the world around him, or playing Farmville, to which he admits a complete and totally blissful addiction. You can keep up with him at www.facebook.com/dcjuris, or www.dcjuris.com.

Everyone deserves to be happy... thanks for the excerpt!

Good excerpt. Your friend is right. There has to be something for us seasoned readers;)