Of Conferences and Cats

This weekend I'm attending the 16th annual Romance Slam Jam, a conference held in Baltimore MD this year. The Romance Slam Jam grew out of an early desire to recognize, and pay respect to African American authors, and to celebrate their craft with their avid fans.” Emma Rodgers, Ashira Tosihwe and Francis Ray gave birth to the ROMANCE SLAM JAM in 1995 in Dallas, Texas, to demonstrate what Nikki Giovanni describes as “The Power, Passion and Pain of Black Love.”

Slam Jam is a blend of offerings for both author and reader. It's a chance for readers and authors to meet one another in relaxed situation. It's like a huge family reunion. Exciting to meet people you haven't seen awhile. I think Siam Jam readers are a particularly sophisticated and knowledgeable group. As expected, there are serious topics and discussion. Things like the role of non-white romance in the genre, changes in the direction of various sub-genres, as well as breakouts. We debate stereotypes and about special issues of marketing. We talk about the romance genre in general.

But mainly I always have so much fun at Slam Jam. When the conference was created, the hip slang for a really good party or music a jam, as a synonym for spontaneity and exuberance. That's exactly the atmosphere at Slam Jam. It's like a big old family reunion. There can be gossip and jealousy, yes. But there are also hugs and lively conversations. Like at many predominately women conferences, meals at restaurants tend to keep on growing to encompass several tables and there's laughter and shouting from one end to the other. The hotel lounge is a big old meet and greet. Groups will make an impromptu trip to the nearest mall or store-in-a-box. African-Americans-- and I'm sure other ethnicities-- are particularly fanatic about seeing themselves and their lives portrayed in a loving, fun and accurate manner. So they are greedy for the opportunity to talk to their favorite authors. Besides books, we talk a lot about our families and daily lives in fun and friendly way which can turn hilarious in a snap. We exchange ideas and teasing.

Last night, Thursday, was the welcome party with a 60s/70s theme. I'm wearing a tee shirt with a silhouette of Fred Sanford and the words "You Big Dummy." Check my Facebook page where I'll give links to more photos as the conference goes on. People, some of them really elaborate. There were prizes for costumes and dancing. We had a Soul Train line which entertained by allowing women of all ages (and the few men: writers or husbands) to show their dance moves. I got out on the dance floor and waved my arms in the air which is not my usual routine at a party. This music is from my generation and it brings back a lot of memories.

This is only my third Slam Jam. I always thoroughly enjoy myself. Although I don't have a huge fan base, I'm often thrilled by running into someone who recognizes my name. These are occasions that remind me what it's all about. I'm enclosed in my office for so many months weaving my private visions; but the whole purpose is to share with others.

Although this conference is focused on the romance of Black authors, all ethnicities are welcome. I've seen people of all races welcomed and having a good time. Like other conventions, you leave exhausted, filled with inspiration, buoyed by new friendships and bursting with new ideas.

I became addicted to reading around age eight when my teacher read aloud Charlotte's Web to the class. When I was in high school, I began writing my own novels. Readers don't always understand that writing is something we have to do and that urge can sometimes be frustrating. In my stories I love to explore sensuality and spirituality but I never know what strange settings or characters will be involved.

About my latest novel: 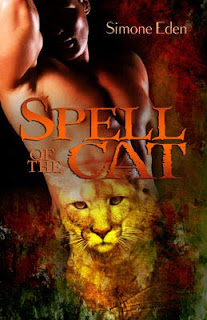 The shape-shifting cat-like creatures called Baashi, have hidden from humans for eons. Jenna, a computer specialist at a laboratory where the Baashi are being experimented on, has begun to despise what is happening to the mysterious creatures. Keth, a male of the Baashi, returns from a journey to find his pack being captured and disappearing into a lab. He'll do anything to get inside that lab and rescue his people. Jenna and Keth are bound together in a series of mind-shattering encounters. But in order to be together, one of them will have to betray their own kind.

Here's a brief excerpt from my current book Spell of the Cat. You be the judge of how sexy the shape-shifter Keth is.

Golden yellow eyes blinked at her, then closed as it laid its head back down, a purr rumbling from its body. The aides at the lab called the animals were-cats instead of the official scientific name created by Dr. Phillips. Gazing into this animal's golden eyes, she could believe it.

Jenna shrugged her perplexity away. She'd done all she could at this point. Its breathing sounded more regular and it seemed to be sleeping naturally now.

She carried the animal to the couch in the nearby living room space and threw a light blanket over it.

"You are magnificent," she murmured. She dug her hands into the soft fur and stroked her hands up and down its ribs. She could now tell that the animal's fur wasn't a monotone color, but a luxurious mottled blend of warm browns, golds, and black. The cat stretched and nuzzled against her. In helpless fascination, Jenna allowed it to make itself comfortable.

She'd been impressed by the cats at the lab, but this one made her blood rush through her body with wonder. She couldn't seem to take her eyes off it or keep her hands out of its fur. She felt, rather than heard, the deep rumble in its chest.

Jenna continued to stroke the cat on her lap, watching the TV show. Snowball gave them both a jealous sniff and stalked off with her nose in the air.

The program barely registered in her mind as a warm buzz spread throughout her being, making her more and more sleepy. Finally she eased from beneath the cat, went into her bedroom and closed the door.

Keth snapped awake. A tiny house cat was snuggled up against him. When he moved, it sneezed delicately and scooted closer. Keth eased himself away. A pain reminded him of his predicament and the night's events. He stretched his body while absorbing the sensual awareness from the nearby human woman. The woman with her strong, beautiful spirit.

Being with her had started to heal him. His bones were stitching back together; the pain lessening. His friends had brought him to this house because of the powerful healing he needed. Since ancient times, energy had flowed between Baashi and humans in a therapeutic symbiosis, benefiting both. The Baashi had once been viewed as gods but when humans began to try to control and exploit the power, the Baashi went into hiding, roaming the earth in small feral packs.

A pulse on the side of his head teased Keth with the woman's nearness. The bond between them was already woven thick. His inner mys itched to join with her. Leaping to his feet, Keth concentrated on transforming. A knot of pain protested the exertion of his power but he focused harder. With sparkling and crackling, his body wrenched into man form and he stood upright, naked, shaking long dark hair back from his eyes. The woman's house cat backed away from him, hissing and flicking its tail in antagonism. Keth ignored it.

Scratches marred his muscular legs, a bruise discolored the golden skin over his ribs. He ran one hand through his hair. He still had a headache, but he felt much better than when he arrived here. He looked towards the woman's door.

One more exchange with her should finish his healing. On bare feet, air caressing his naked skin, he padded across the living room. But when he reached for the doorknob, the little cat sprang out and sank its teeth into his toe. Keth cursed, his leg reflexively kicking out. The animal tumbled across the floor and righted itself at once, hissing and arching its back. Keth hissed a warning of his own. The cat backed down and Keth turned the knob on the door.

There was no sound within the room as he eased the door open. Keth slipped inside and shut the door behind him, leaning back against it. The woman on the bed lay in a deep sleep due to the enspelling nature of the mys bond he'd cast between them. A stream of light from the slightly opened bathroom door flowed over her honey-caramel skin. She was an exquisite dessert laid out for him. Her hair was hidden by a cranberry colored wrap, which suited her skin tone, but he knew rich mahogany waves of hair fell past her shoulders. Dark lashes swept her cheeks and rosy lips were parted. The unconscious sensuality of the scene warmed his core and caused his erection to thicken and rise further. He hungered for the most direct connection, physical joining.

Posted by Lisabet Sarai at 3:37 AM

Welcome to Beyond Romance. Your cat-shifters definitely sound delicious. I love the interactions between Keth and the felis domesticus.

Good luck with the book and thanks for sharing.

Thanks for having me here, Lisabet. I've enjoyed visiting your blog for some time. I'm always happy to share.

PS: if I sound a little disjointed above--it must be the 2 glasses of wine I had! lol. I'm not used to partying and I had a good time. On Friday night there as a PJ party with sexy men in skimpy pj's of their own!

Spell of the Cats sounds good. I also fell in love with Charlotte's Web but I was 10. Sister Presentation read it after we were done with our CCD classes. Slam Jam also sounds like you are having a lot of fun. Enjoy yourself.