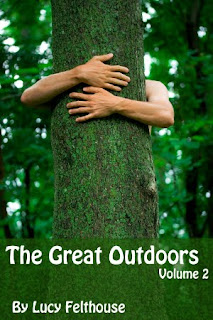 This book is the second in a series. It wasn't originally intended to be a series, but the first volume suddenly took off and start selling lots and I was getting lots of positive comments. It seemed something in the book, particularly the Scottish woodsman character, Greg, was resonating with people. I was really pleased that people wanted to read more stories from me. So I penned this second short volume and put it out there. If it does even half as well as the first I'll be very happy!

Back by popular demand - more stories involving the great outdoors.

In A Date to Remember, Zoe is on the worst date of her life. Then something happens to make her change her perception of Nick forever.

The second tale, In Pursuit of Anna, follows on directly from Fun in the Forest, a story featured in Vol 1 of this collection. Anna takes off after their encounter, but Greg decides he's not quite finished with her yet...

Zoe felt wet splashes on her face. Looking up, she grimaced at the sky, which was dark with ominous-looking clouds. Typically, they were nowhere near decent shelter, having wandered into a park.

Nick, dull as dishwater but still a gentleman, ushered Zoe into the slight shelter of some trees. Removing his coat, he hoisted it over their heads and tucked Zoe under his arm, keeping her warm as well as dry.

And not a moment too soon. The spatters of rain quickly turned into torrents so violent that they bounced off the ground. Instinctively, Zoe snuggled closer to Nick. The temperature had dropped and their breath was visible in the air. The pair stood silently, awestruck by the force of Mother Nature.Zoe felt Nick shift, and she looked up at him. He was looking at her, a lopsided grin on his face.

"It's amazing, isn't it? Makes you feel kind of insignificant."

They both looked back at the rain, which was still teeming down, heedless of their plight. After a few silent seconds, they shared another glance. Their breath mingled together under Nick's coat and Zoe was suddenly very aware of how close together their faces were. Especially when Nick bent down to kiss her.

Zoe surprised herself by not freaking out when their lips touched. Even more so when he slipped one hand round the back of her neck, pulling her closer, while the other still held the coat over their heads. She reasoned with herself; he was a good-looking guy. And it had been a while. One little kiss wouldn't hurt.

When Nick manoeuvred them both round so she was pressed against the tree, the last thing on her mind was getting her coat dirty. He pulled away from her mouth, only to start kissing her neck, jaw line and even having a little nibble on her earlobe. Zoe felt juices trickling into the gusset of her knickers and her clit ached for attention.

Nick clearly had no such qualms. He moved a hand down to undo the button of her jeans and looked at her, as if for permission. She smiled and soon his fingers were easing into her pants, seeking her pussy. His fingers were cold as they reached her labia, causing her to gasp, then giggle. Nick grinned, looking into her eyes in the gloom created by their makeshift umbrella. He fixed her gaze as he parted her lips, dipping his fingers into her sopping core.

I loved this. I definitely will look for both stories. Thanks for sharing.
Carol L
Lucky4750@aol.com

I have not read the first one... this second one has caught my attention...