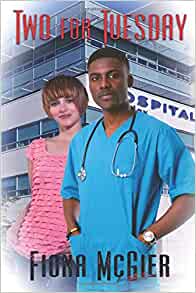 Two for Tuesday by Fiona McGier

One night at the bar, he performs the Heimlich maneuver on a cute coed who’s had one too many. He figures he’s just doing his duty as a medical professional, but Melanie McKee, the young lady in question, sees things differently. She wants to thank Marcus for his help, and given how attractive he is, she can’t think of a better way than inviting him to join her for pizza and sex.

Their physical chemistry astonishes them both, but they’re compatible in other ways, too. Pretty soon they’re seeing each other regularly on Tuesday nights. Melanie’s a free spirit, though. She doesn’t want an exclusive relationship and unlike Marcus is definitely is not interested in marriage. As they complete their studies, their divergent views and goals drive them apart.

Ten years later, with Marcus’ ill-considered marriage to a society gold-digger about to be dissolved, he tries to reconnect with Melanie. They’ve both matured; it turns out that the passion that united them burns stronger than ever. Still, their different preferences and life choices make it hard for them to find common ground.

The characters are appealing, particularly Melanie, who has a distinctive voice and an unusual but believable attitude toward casual sex. When Marcus first meets her, she bowls him over with her frank enjoyment of carnal activities. In some ways she’s more mature than he – she’s certainly more experienced – and she teaches him quite a lot about relaxing and letting go. When they meet again, Marcus is more her match. It’s great fun to see him trying to tame her, and watching the sparks fly.

The plot in Two for Tuesday is quite simple and like most romance, the outcome is never in doubt. Still, you’ll enjoy the path to Melanie’s and Marcus’ happy ending. There are some great scenes near the conclusion of the book, in particular Melanie’s encounter with her beloved’s ex in the ladies’ room, and a fairy tale finale.

She found the correct elevator and got up to the right floor in enough time to have about fifteen minutes to go until three p.m. Just enough time to use the bathroom and to check to be sure I look all right. Five minutes later she was powdering her nose when she realized that a woman had entered the bathroom and was just standing there, staring at her.

“Excuse me, do I know you?” She turned to face the other woman.

“No. But I know who you are. I’ve seen your picture. You don’t look as good in person.”

“Yes. And you’re the slut who stole my man.”

Melanie sighed. “First of all, I didn’t steal Marcus. You had already thrown him out before he got in touch with me again. I hadn’t seen him in ten years.”

“But I notice that you don’t deny that you’re a whore. And not even a very good one, since you never got paid for it.”

“But you did take my man away from me. He might still be my husband if you hadn’t committed adultery with him. He might have tried to work things out with me. But you made it too easy for my man to leave.”

Taking a deep breath, Melanie shook her head. “No, not really. What you’re forgetting is that Marcus was never really your man to begin with, no matter how you tried to lay claim to him. Marcus has been my man for over twelve years. He’s just come back to me after a really long break.”

I think this snippet will give you a sense of who Melanie is – and why I enjoyed her story so much.

Two for Tuesday will leave you feeling satisfied – maybe even a bit smug – as the each of the characters gets what he or she richly deserves.

Wow! Thanks so much for your kind words, Lisabet. I might add, thanks for enjoying my book so much. Since I enjoy your writing so much, that's high praise, indeed.