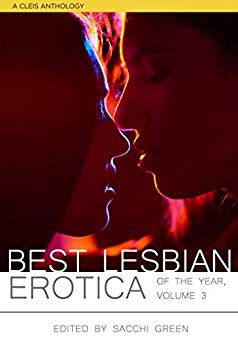 Best Lesbian Erotica Volume Three turns out to be a welcome exception. Sacchi Green has assembled a dazzling assortment of stories that explore lesbian desire from a wide range of perspectives. Every tale is competently written, and most are arousing, but at least half go way beyond these minimal criteria. To put it colloquially, they knocked my socks off. I’d finish one of these amazing stories, take a deep breath, wait for my heart rate to return to normal–then go back and re-read it.

“Morning Fog” by Scout Rhodes is a case in point. Almost a prose poem, this tale captures a moment in time, celebrating the profound physical and emotional connection between two women with histories and scars.

Here we are, she and I, two old queers who have endured long, curious, circuitous lives that have brought us to this place, this morning, this moment. We’re neither of us gold star anything, having fucked men, women, trans folk, and many, many people between the two of us. We’ve both borne, breastfed, and raised children created the “old-fashioned way,” which makes us pariahs in certain hard-line lesbian circles. We both identified as bisexual in our youth, we’ve both married men in our time, we’ve both been subjected to degradation and abuse at masculine hands, but
now we’re both butch dykes, and we’re both survivors. That’s it— we’re gold star survivors. Isn’t that enough? It sure feels like a lot, after far more than a century of combined years.

Two gold star survivors who found each other in this crazy, neo-fascist cesspool that America has become, and we hold on to each other for dear life while living in the crosshairs.

This story combines tender emotion with raw physicality in a one-two punch that left me dizzy with admiration.

“Where There’s Smoke” by M. Birds, which comes next in the volume, offers a radical contrast in structure and tone. A small-town marijuana vendor finds a new customer, and a new lover, in a crippled city professor who needs the pot for pain relief. June, the dealer, is a practical, no-nonsense woman forced by circumstances to bury her dreams. The social distance between the two women makes their eventual connection all the more intense.

The woman in the woods didn’t shake June’s hand and June noticed the curves of her long fingers, the way they stuck tight together like she was wearing mittens, knuckles round and swollen. “What do you want exactly?”

“I wanted to see . . . ” June paused, chewing her lip. “If there was anything you needed. Kyle said there might be.”

“Kyle from the pharmacy.” Miriam crossed her arms. She glanced back into her cabin, and then out toward the path leading through the woods. “Did you walk here?”

June laughed and nodded. “Like a time warp, isn’t it? Like someone from the sixties saw one postcard of Switzerland and then dropped acid and thought ‘I should build that.’”

“I was going to say—quaint.”

I’ve rarely read a story by Sommer Marsden that I didn’t love. Her tale “Husher” in this collection is no exception. More light-hearted than the previous stories, the story chronicles the hook-up between a painfully tongue-tied barista and the black-clad hair stylist she’s been crushing on for weeks. Angela, the stylist, seems like the dominant partner in the interaction. But appearances can be deceiving.

Then there’s Raven Sky’s wonderful “Fuck Me Like a Canadian”, which chronicles a steamy affair between a dread-locked Canadian backpacker and an exquisite Moroccan haman attendant.

There is a heat to attraction. An energy. You can feel it. It’s undeniable. This is the last place I expected to feel it. Not least of all because it’s illegal here. Is it punishable by death? I strained to remember my online research predeparture. Morocco. Homosexuality. What did Google have to reveal about that? My mind blanked. Because her hands were on my naked flesh, lathering me in a traditional black olive oil soap. Something in her actions was more than indifferent. Something in her eyes, when they happened to catch mine, was not impersonal.

In Till’s culture, women can play, but penetration is forbidden, the prerogative of some future husband. The constraints only make the characters’ interactions more poignant.

I won’t tell you about every story I loved. I want to leave some discoveries for you to make on your own. However, I have to mention the last story in the collection, Anna Watson’s “Sweet of My Heart”. In this richly imagined and romantic tale, set in Depression Era New York, a penniless dance hall girl falls for one of the “Angels” attending the charismatic preacher who runs a network of soup kitchens. The life experience of Mimi La Rouge and Charmed Soul could hardly be more different, but desire draws them together and cannot be denied.

I lean into her and reach out to take up the very end of her braid. I pull off the string she’s tied it with, and slowly begin to separate the strands. When I’m finished, I place both hands on her cheeks and kiss her forehead between the wings of her hair. She blushes and stays very still. I move behind her on the bed, lean against the wall, and draw her close between my legs so her back rests against me. I spoon myself to her, the rough weave of her undershirt delicious on my nipples, the slick of her smooth slip lovely on my cleft. I do know to tread lightly with girls like my Charlie. I do know that. I press close, I rub my body on her. Oh, sweet of my heart the darling! She can’t hide it. She is breathing, sighing, and helping me to rub. She need not turn around, though, my skittish thoroughbred. For this first time, I will carry her and bring her along.

Butches and femmes, fresh young things and veterans of the cultural wars, experienced dykes and dreaming innocents, wealthy sophisticates and women barely getting by, rock stars and ballerinas, professors and truck drivers – you’ll find all these and more in Best Lesbian Erotica Volume Three. Sacchi Green has done a remarkable job weaving these disparate narratives into a satisfying and coherent whole.

There are several series of anthologies entitled “Best”. All too often they disappoint. In the case of this book, the title definitely fits. Overall, these are the best lesbian stories I’ve read in a long time.

Thank you so much, Lisabet, for your thoughtful and positive review of BLEv3. I am still blushing at your kind words about my little story about love and lust between two older butch dykes!

Would you kindly correct the spelling of my first name from Scott to Scout? Much obliged!

I'm so sorry, Scout! Blame it on my bad eyesight. I've fixed this.

Thanks for dropping by. Your story is magnificent.