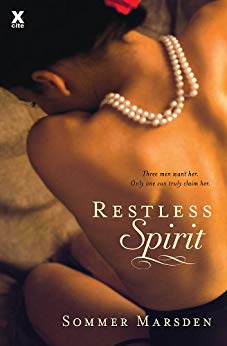 Tuesday Cane has trust issues. That’s not too surprising. She lost both her parents in an accident and grew up with her grandmother as her only family. Her first serious relationship went sour when her lover began to physically abuse her. She set him straight, literally beating him off with a baseball bat, but the trauma has left her cynical, suspicious and wary, especially about love.

Not about sex, though. Tuesday’s libido appears boundless. As long as there are no strings attached, she’s up for almost anything.

When Tuesday inherits her grandmother’s house in a picturesque lakeside community upstate, she figures it’s her chance to escape from her ghosts and start a new life. Her gran’s presence haunts the comfortable A-frame like a benevolent guardian, but Tuesday still feels insecure and on-edge. That doesn’t stop her from getting sexually involved, simultaneously, with three different men.

Adrian works as caretaker for her gran’s property. He’s a good-looking local boy with whom Tuesday had a fling when she visited during her teenage years. Reed is a charming, articulate former TV star who now owns a berry farm in the town. Shepard is Tuesday’s next door neighbor, a formidable bear of a man who had a career as a cage fighter before settling in as a carpenter in Allister Lake.

Until one of them does get through her armor—and she’s ready to run again.

Although Tuesday eventually realizes she loves one of her three sex partners (and I won’t say which one, though you’ll probably figure it out by the time you’re halfway through the story), even her early encounters are spontaneous, wild, arousing and satisfying.

To avoid spoilers, I won’t say much about the plot, except to say that there’s a suspenseful subplot regarding a stalker. There are also paranormal echoes. Neither of these aspects of the book are as fully realized as they could have been. The author’s focus is squarely on the developing connections, both sexual and emotional, between Tuesday and the man who completes her. Everything else falls into the background, which ultimately weakens the novel.