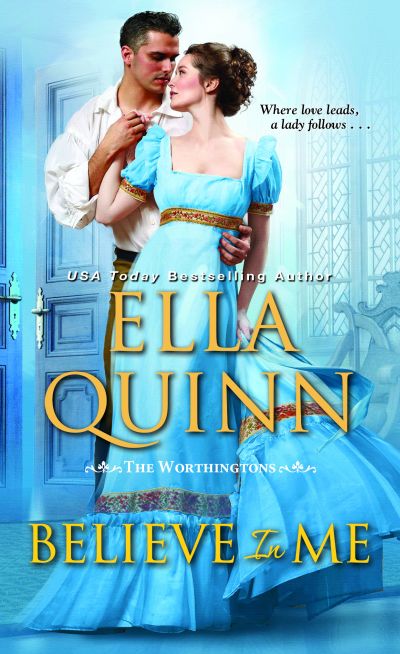 Even the Worthington least likely to wed may find her perfect match . . .

Marriage has worked out quite nicely for her older sisters, yet Lady Augusta Vivers is certain it would end her studies in languages and geography, and stop her from travelling. But when her mother thwarts her plan to attend the only university in Europe that accepts women—in Italy—she is forced to agree to one London Season. Spending her time at parties proves an empty diversion—until she encounters the well-traveled Lord Phineas Carter-Wood. Still, Europe awaits . . .

Phineas has studied architecture all over the world, yet Augusta is his most intriguing discovery yet. How can he resist a woman who loves maps and far-off lands? But her longing for all things foreign hinders any hope of courtship. When he learns her cousins have offered a trip to Europe, he secretly arranges to join their party. For he is determined to show Augusta that a real union is a thrilling adventure of its own. And when their journey is beset by dangerous obstacles, he gets far more opportunity than he bargained for . . .

“Italy!” Her brother’s bellow could probably be heard all over the town house and in Berkeley Square. Possibly even farther.

From her position on the sofa, Lady Augusta Vivers stifled a sigh. She refused to allow her posture to sag or disappointment to show on her countenance. She had known her campaign to be allowed to attend university was not going to be easy. Perhaps she should have started her scheme earlier. Or given her brother a hint to temper his shock.

“It is not as if Padua is some unknown place in South America or Africa,” she pointed out calmly.

“Where on earth did you come up with such an . . . idea?” Her mother paled a bit and her faint voice pierced the deadened air.

“I wish to further my studies.” Augusta fought to keep the exasperation from her tone. Why else would she want to go to university? Not only that, but traveling there and living in Italy for a time would allow her to see a little of the world she had been studying. “As educated as Miss Tallerton and Mr. Winters are, they long ago exhausted the limits of what they can teach me. Which is the reason I have been corresponding with professors in Europe and taking lessons from visiting scholars, hoping to learn more. It is no longer enough.” In fact, her thirst for knowledge had grown to the point that she needed to attend university as much as she needed food or air. “Yet it has become clear that the only way I am going to succeed is by studying with experts. For that, I must attend university.”

“But, my dear”—her mother paused for a moment as if to gather her thoughts—“do you not wish to wed?”

Of course she did. Just. Not. Now. “I do not recall anyone asking Charlie if he was forsaking marriage simply because he wished to attend Oxford.” She wished Grace’s brother, properly called the Earl of Stanwood was here. He’d be able to help. Augusta turned her gaze back to Matt. As her guardian and Earl of Worthington, he was the final decision maker. “If I were a boy you would allow me to go.” 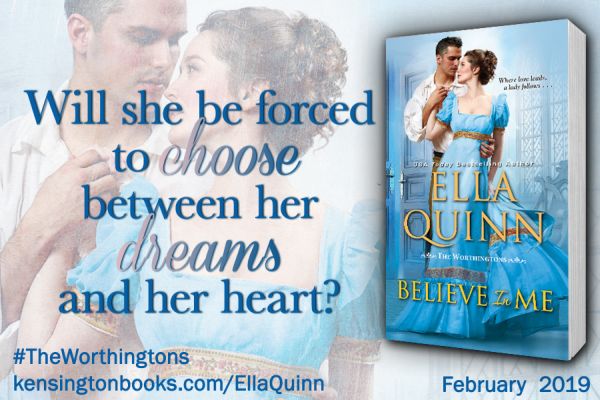 USA Today bestselling author Ella Quinn's studies and other jobs have always been on the serious side. Reading historical romances, especially Regencies, were her escape. Eventually her love of historical novels led her to start writing them.

She is married to her wonderful husband of over thirty years. They have a son and two beautiful granddaughters, and a Great Dane. After living in the South Pacific, Central America, North Africa, England and Europe, she and her husband decided to make their dreams come true and are now living on a sailboat. After cruising the Caribbean and North America, she completed a transatlantic crossing from St. Martin to Southern Europe. She's currently living in Germany, happily writing while her husband is back at work, recovering from retirement.

Ella loves when readers connect with her.

Ella Quinn will be awarding a $50 gift card - Amazon or iTunes (winners choice) to a randomly drawn winner via rafflecopter during the tour.

Both you and your heroine are women after my own heart. I love foreign adventures -- though I think I might get claustrophobic living on a boat.

Anyway, I really hope your tour goes well and that the book is a success.

I love a smart heroine and a hero that loves her for it! I look forward to reading this book.

What do you love about your characters?