In January, I released the third book in my Vegas Babes erotica series, Sin City Sweethearts. This no-holds-barred erotic romp features a pair of fraternal twins, Marcie and Maddy, who come to Las Vegas to attend university and to escape from their overprotective family. They move into the apartment below Annie and Ted, a slightly older, recently married couple who have an open relationship. Annie and Ted undertake to initiate the two newcomers into the hedonistic, carnally-permissive lifestyle of Sin City. Needless to say, the twins are eager and attentive pupils who take their lessons to extremes even Annie and Ted didn’t predict.

In self-publishing this tale, I used the procedure I’ve adopted recently, setting the book up as a pre-order on both Amazon and Smashwords. This tactic means that by the time release day rolls around, the book will have purchase links on all the third-party platforms to which Smashwords distributes, such as BN and Kobo. In the past this has always worked like a charm.

With this book, though, I ran into problems, specifically with Kobo. On release day, more than a week after I submitted the book, there was no trace of the title on Kobo. I waited for another week. Still no Kobo link. Finally, I sent a support request to Smashwords.

I got a prompt and courteous response promising to investigate. After a couple of rounds of emails, I got the answer: Kobo had rejected my book because it violated their content standards.

What? I pointed out that the two previous volumes of the series, which are just as explicit, were available on the Kobo platform. The diligent customer service rep from Smashwords dug further and came back with the news that the following lines had caused the book to be banned:

"Holy Shit! Was Marcie licking her own sister? That thought, along with the blonde's oral talents, pushed the ignition button."


Apparently this was considered as breaking their rule against depiction of incest.

Note that there is no actual incest going on in this scene. Ted has Maddy sitting on his lap, bouncing up and down on his cock. Here’s the context, the paragraph preceding the offending sentences:

“Argh…” he sputtered. The sensation was almost too intense. Marce backed off a bit, letting him breathe. When Maddy raised her body off his shaft, Marcella swiped her tongue along the exposed length. He arched up to bury himself in the brunette’s juicy passage. The blonde’s daring tongue followed, keeping contact with his rod until it was completely hidden in Maddy’s cleft.


In short, Sin City Sweethearts was banned from Kobo because one of the characters was thinking about incest, and finding that thought arousing.

We’ve apparently reached the state described in George Orwell’s 1984, where merely thinking about forbidden things is considered a crime.

Arousal begins in the mind. Imagination is the ultimate aphrodisiac. Our characters’ sexual journeys originate in their fantasies, before they take any action. If Kobo’s rules were consistently applied, our characters’ hottest, most taboo fantasies would become unpublishable. This includes not only incest fantasies but also rape fantasies, golden showers, enemas, fantasies about dogs or horses...

After twenty years in the business, I still don’t understand the double standards that govern sexually explicit fiction as opposed to other fiction. If authors can write about murder, terrorism or war, why the special rules for sexual activities? But even if I’m willing to exclude some categories of sex acts from my stories (and there are some actions I’d be loathe to write about), must I censor my characters thoughts as well?

I suppose that Kobo might argue that there is no distinction in fiction between real actions and character fantasies, in that both exist only in the imagination of the author and the reader. I think this is wrong-headed. In reality, and in fiction, humans have control over what they do, but not what they think. If I’m attracted to my brother, I’m not going to do or say anything to reveal this situation, but that doesn’t make the attraction disappear.

In 1984, the supposed antidote to “thoughtcrime” is called “crimestop”.

The mind should develop a blind spot whenever a dangerous thought presented itself. The process should be automatic, instinctive. Crimestop, they called it in Newspeak.

He set to work to exercise himself in crimestop. He presented himself with propositions—'the Party says the earth is flat', 'the party says that ice is heavier than water'—and trained himself in not seeing or not understanding the arguments that contradicted them.


My brother is not attractive. I don’t find that horse’s schlong arousing. I have no interest in watching two eighteen year old sisters pleasure one another.

Doesn’t seem to work for me...

The rep at Kobo suggested that they’d reconsider their decision if I modified the offending line. I thought about it. It’s not as though my sales are so high that I can afford to forgo listing on a popular platform. Indeed, I’ve been buying many ebooks for my own consumption from Kobo. I find their interface, their policies and their service far superior to the Mighty Zon.

Ultimately, though, I balked at the notion. I’m not willing to participate in this ridiculousness.

So you can buy Vegas Babes Books 1, 2 and 4 on Kobo, but not Book 3. I do hope some eager readers will bug them about this inconsistency. 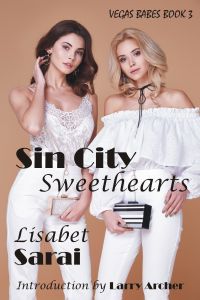 Lisabet, your post was thought-provoking (pun intended). The puritans at Amazon have apparently stepped up their game, too. I recently spoke with a friend who self-pubs there and she said they are now banning book covers featuring shirtless men. This kind of censorship is a double standard, since we have a Clown in Chief who routinely makes racist and homophobic comments in public, and people cheer him on.