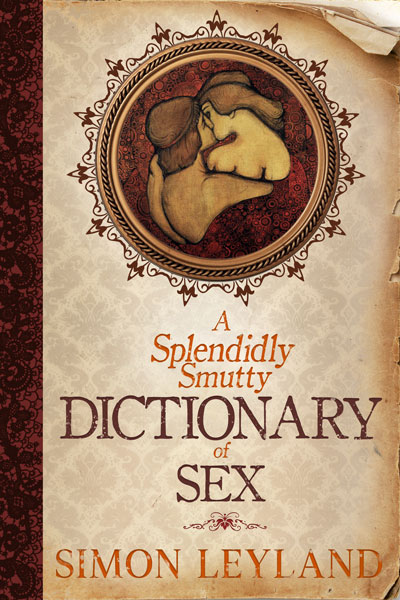 A Splendidly Smutty Dictionary of Sex explores the role of sex from the Etruscans to the modern day. Taking the form of a dictionary, it traverses the many forms of “hanky panky” in literature, music, words and the actions of the famous and not so famous.

Within this paean to the world’s favourite pastime, you will discover the “perils of self-pollution”, why Popes had to have their scrotums felt, what Buckinger’s boot and Omar the tent maker are, the whereabouts of John Dillinger’s dong and Rasputin’s rump splitter. What “to arrive at the end of a sentimental journey” means, how to restore your virginity, Medieval sex tips, the woman who had 130 orgasms in an hour, and what on earth the armadillo’s got to do with the missionary position.

The book covers an array of historical characters and their sex lives — from Chaucer to Wallis Simpson, from Rockefeller to a future king of England.  Together with the definitive histories of vibrators, the merkin and the word “fuck” amongst others, A Splendidly Smutty Dictionary of Sex is perhaps one of the most unusual books of the year!

There have been countless books on the world’s favorite pastime. Indeed, if you Google sex books, you will find over 150 million results!

But, there seems to be a glaring omission. No one has yet compiled a tongue-in-cheek dictionary of the words, thoughts and some of the very strange deeds associated with it.

But where would you start? Well, quite obviously, at the beginning.

Consider the prehistoric man, not only trying to contend with the Ice Age, living in a damp cave with no sports channels, very little food and with big scary animals trying to eat him. You would safely assume the last thing on his mind was sex.

In between avoiding sabre toothed tigers and other hairy things that bite, he would spend some of his time carving things known as Venus figurines. These were Prehistoric Barbie dolls with huge breasts and with massive Kim Kardashian-like asses. These figurines, of which hundreds have survived, appear to have had no practical use whatsoever, other than be a sort of Stone-Age version of Playboy.

So, despite our view that all previous generations were old-fashioned, prim and inhibited (well some were), the fact is that we as human beings have always been obsessed by sex. Wars won and lost because of it, people made rich by it and reputations ruined by it.

A for Aphrodisiac Users

Advice on starting your engine from the famous and infamous through the ages.

Aristotle (384 – 322 BC), Greek philosopher:
When not sitting still and philosophising, he would recommend the use of oil of peppermint to stimulate sexual desire. To reduce the libido, he also suggested walking long distances through the hills barefoot.

Pliny (23 – 79AD), Roman naturalist and author:
He came up with this rather obvious suggestion that in order to fan the flames of lust: Why not to eat a hyena’s eye with a dash of dill?

Niccolo Machiavelli (1469 – 1527), Italian statesman:
Whilst taking a break from plotting, he swore by the aphrodisiac powers of the mandrake plant. He even wrote a not particularly amusing comedy, La Mandragola (1524), in its honor.

Giovanni Casanova (1725 – 1798), Italian libertine:
The patron saint of shagging attributed much of his spectacular sexual energy to the fact that he always ate 50 oysters for breakfast every morning.

Captain James Cook (1728 – 1779), English explorer:
Before being killed by angry Hawaiians, Cook feasted every morning on a special, aphrodisiac dish of fresh shrimp. He often boasted that he could take on ten native girls a day. Perhaps that was the reason for the angry Hawaiians.

Madame Du Barry (1743 – 1793), Mistress of Louis XV:
She tried to keep Louis XV in her thrall by feeding him foods that would make him weak with lust: sweetbreads, venison, pheasant cooked in white wine, truffles, capon in sherry broth, to name just a few.

http://www.deepdesirespress.com/simon-leyland/
Posted by Lisabet Sarai at 8:35 AM

What an interesting trek through history! I don't know how much of this is accurate but it was fun to read nonetheless. If you travel through south Florida's Gulf coast, you'll see oysters touted as Nature's Aphrodisiac. The one about Capt. Smith's shrimp diet was a new one, as was Ms. West's almond prescription. Thank you for sharing.

Hi, Tim - Actually, this author did a huge amount of research. The book includes a list of all the sources.