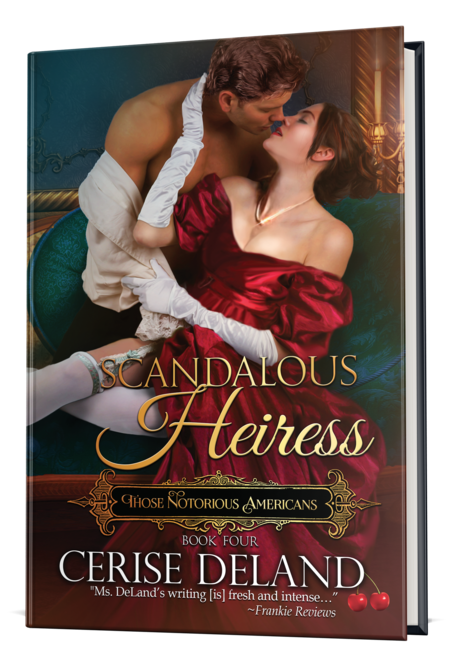 She was his ruin.

Ada Hanniford is an oddity. An American heiress, a beauty, she’s sowed her wild oats and paid the price in sly rumors. Preferring politics to promenades, gardening to waltzing, she rebuffs the toffs who would seduce her for the fun of it or propose to marry her merely for her millions.

Embracing impending spinsterhood, she’s shocked to meet a man who fascinates her with tales his own adventures in exotic lands. She’s drawn to him, charmed by his kisses and his sense of honor.

Then one night, he braves society to save her reputation…and in the act, destroys his own.

He was her salvation.

Victor Cole is a survivor. A man who has worked diligently to overcome his lack of title and land, he has finally buried the disgrace of a wife so scandalous he had to sail thousands of miles away to wipe away her stain.

Then he meets Ada Hanniford. She’s so natural, so unique, he must court her and kiss her. But would he be wise to claim her? With each word, each sigh, he comes closer to loving her. But when the one man whom he should respect shames her, Victor cannot allow him to sully her. Rescuing her becomes his sole purpose. But to save her means he stirs scandal once more…and destroys his own bright prospects.

How can a man and woman who love each other overcome the slings and arrows of their scandalous pasts and build a life together if no one else can forget their sinful pasts?

Scandalous Heiress is the fourth book in Those Notorious Americans series but can also be read as a standalone novel. 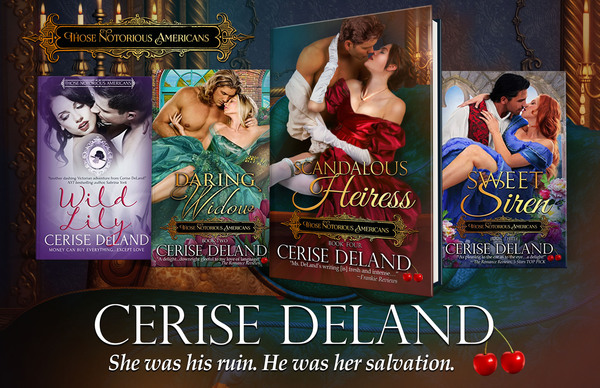 “Mama, I’m not cut from the cloth of a husband.”

“Of course you are. Most in the family prove it. Your father and I have been supremely happy. Your sister, Augustine is still infatuated with her husband John after four years. Catherine loves her Colin, the same. She told us last week, they’re to have an addition to their three in December.”

“I will congratulate them when I see them.” His two younger sisters had met and fallen in love with their future husbands in much the same slapdash fashion as their parents. So had he with his wife. The difference was that Victor’s inamorata had proven to be a witch. However, his older half-brother Richard, the marquess of Ridgemont, had yet to fall in love with anyone. In lust, yes. Often. And always with the wrong sort. Why should this latest one be any different? “Tell me more about her, Mama. The sooner, the better. The voices outside,” he said as he tipped his head toward the garden, “include said young lady, I assume?”

“They do. You will meet her and not understand why he is so infatuated.”

“Boldness may be what he needs. And from the sounds of it she likes children.”

His mother lifted a shoulder. “She does. But rumor says she has fifty thousand as her marriage portion. God in heaven knows what the monthly earnings are off that.”

Impressed, he heard her awe at the enormity of the lady’s dowry. A princely sum, worthy of a marquess, no doubt. “That’s quite a tick to owe one’s tailor.”

She mashed her lips together. “He owes no such amount to his tailor. His solicitors, on the other hand, may require a king’s ransom to get him out from under this latest legal action.”

Victor arched his brows. “That bad?”

“I have not asked him. He does not tell. Rumors say Dundalk will wring every penny from him.”

“And a new wife would remedy the financial issue and end the whispers.”

“They would,” his mother said with resignation in her voice.

“So we will assume she loves him and he her. After all,” he said and put his cup and saucer down on the table. “There must be more than her money for him to consider a leg shackle. At thirty-three, he’s getting long in the tooth.”

“Pass—” Putting his napkin to his mouth, he wanted to guffaw. Richard would never even glance at any woman who wasn’t incomparable. Dull, American, uneducated. Lascivious, adulterous, unprincipled. Without thought, he’d take each to his bed if he fancied their faces or forms. But plain or ugly? Neither merited a moment’s fascination for him.

“Ah, let’s go in now!” Called one young lady to her companion and his daughters.

“Here they come,” his mother whispered. “Gird yourself. Your girls have been starved for you and the two ladies can be whirlwinds.”

He began to rise to his feet.

In a rush of giggles, wispy white muslin and exclamations of delight, four beings dashed in front of him. Two jumped up and down. The other two, taller and willowy, stood behind the younger, grinning and wide-eyed as if they’d never seen a man before. In the shadows, stood the girls’ amah, young demure Wu-lai.

“Papa! Papa!” His two chicks barreled into him before he could find his balance. They fell in a heap to the sofa. They were kissing his cheeks, and hugging him as if they’d squeeze the stuffing from him.

“Oh, Papa!” crooned his oldest, Vivienne as she gazed up at him with a grin so like his own. “We’re so glad you’ve come. We’ve had such a good time.”

“We have!” said six-year-old Deirdre with the earnest turquoise eyes resembling her grandmother’s and his own. She smelled of roses, like the red bud in her hand. “You’ll like our new friends. Grandmama likes them.”

He cupped Dierdre’s cheek and then his oldest girl’s. He kissed them on the crowns of their shining strawberry blonde heads. “You must introduce me, then, shouldn’t you?”

“Oh,” said his oldest in serious rebuttable, “we cannot, Papa. Grandmama must introduce you, mustn’t you, Ma’am?”

His mother chuckled. “You can see what good influence I’ve had, Victor, that I’ve managed to teach them rules of etiquette in the two weeks you were in London.”

“Wu-lai does not know rules of the English, Grandmama,” Vivienne said with concern. “We will teach her the right things. I promise.”

Wu-lai, his children’s Chinese nursemaid, had come with them to England. At fifteen, she was the daughter of the comprador to his factory in the port of Shanghai. Bright, she had learned English quickly in his household school for his servants in the British quarter. When he decided to return to England, he’d asked her if she would like to accompany them. When she agreed, he was overjoyed he’d have help to care for his children on the long trip from China home.

Disentangling himself from his girls, he faced the two young ladies who had laughed and played in the garden. And he was riveted by their appearance.

His mother began her formal introductions.

He registered the formalities of her words.

“Miss Esmerelda Moore, may I present my son, Lord Victor Cole, lately of Shanghai, China. Here to stay in England forever, we do hope. Don’t we, girls?”

His children echoed his mother’s sentiments.

But his head buzzed.

His eyes filled with the vision before him. One young lady, plain and pleasant.

“How do you do, Miss Moore,” he said, bowing slightly. “I am delighted to meet you.” You, with your brown hair and round little face.

“And this is her good friend from New York and Baltimore, the youngest daughter of Killian Hanniford of Hanniford Companies. I think you wrote last year that you’ve heard of his businesses? Yes? May I present Miss Ada Hanniford.”

“Yes, indeed. How do you do, Miss Hanniford.” How do you do? With that open smile, that riot of glistening cinnamon hair and jolly blue eyes, you fare quite well, I’d imagine. A princess among commoners.

Forthright, open, up to the occasion, she beamed at him. American in every frank, refreshing way. She was a froth of confections, plush pink lips, rosy cheeks and spotless ivory complexion. He could imbibe all the sweetness of her and never tire of the sight. Or the desire to taste her perfections.

She dropped a quick curtsey. As she rose, she locked her lovely eyes on his. “I am delighted to meet you, Lord Victor.”

“The delight is mine.” I see why Richard wants every scintillating, voluptuous inch of you…and why he mustn’t have you.

He would take you, use you, despoil you. And rob you of that spontaneity which takes my breath and makes me wonder if I can ever regain it.

Cerise DeLand loves taking readers to distant times with men who cannot undo those dastardly corset laces…and ladies who for a few minutes endure their fumbling!

Join her newsletter: On home page of her website! www.cerisedeland.com